There's still room for improvement, though

The 2020 Alfa Romeo Stelvio Quadrifoglio marks the third model year of the Italian SUV. And every time we’ve driven it, we’ve come away smitten with its driving dynamics but disappointed in areas of technology and finish. So, Alfa Romeo has made some changes, upgrading some interior pieces, revamping the infotainment system and upgrading the driver assist systems. Wisely, everything mechanical has been left alone. The result: This is the best version of arguably the best-driving performance crossover on the market. But it still has room for improvement that could continue to sway some buyers to the competition.

We’ll start with a recap of the best part of this crossover: how it drives. The now famed Ferrari-derived 505-horsepower V6 is the headline grabber, for good reason. It delivers loads of power and does so smoothly and across most of the rev band. It sounds great when driving in Dynamic or Race mode. The transmission it’s connected to, an eight-speed automatic, shifts smoothly and reasonably quickly, but some of the competition can crack off shifts faster.

But what really makes the Quadrifoglio shine is the combined capability of the chassis and all-wheel-drive system. They provide enormous amounts of grip and a neutral feeling that encourages you to keep adding power through every corner. It feels light and responsive, more like a car than a crossover. There’s a bit more body roll than you might expect for such a serious sporting machine, but it’s not unwelcome. It gives the Stelvio a fluid, lively feel, not unlike what you would find in a Miata, which is also slightly roly-poly. The Stelvio is never upset by bumps, either, and the ride ranges from compliant to bouncy depending on the driving mode. The steering in Dynamic and Race mode is extremely well-weighted and progressive, though in Normal mode, it’s a bit light and numb. On the whole, though, the Alfa is wonderful to drive.

Nevertheless, it’s also a luxury crossover starting at over $80,000, so it can’t just drive well. It needs to provide a premium experience with plenty of gizmos to justify the price. In this area, the Quadrifoglio makes a solid initial impression. Every surface is covered in either leather or carbon fiber, and features double stitching at every seam. It looks and feels lovely. The interior’s crown jewels, though, are the huge aluminum shifter paddles. Cool to the touch and weighty, they are a delight to caress, and more so to pull with enough travel to feel like you’re moving something, not just tapping a button. That’s not to say there aren’t sour spots. The physical controls for the climate and infotainment system, while straightforward and simple, still feel a bit loose and plasticky compared to the higher-quality pieces in other luxury cars. And this is despite some pieces actually being upgraded for 2020. 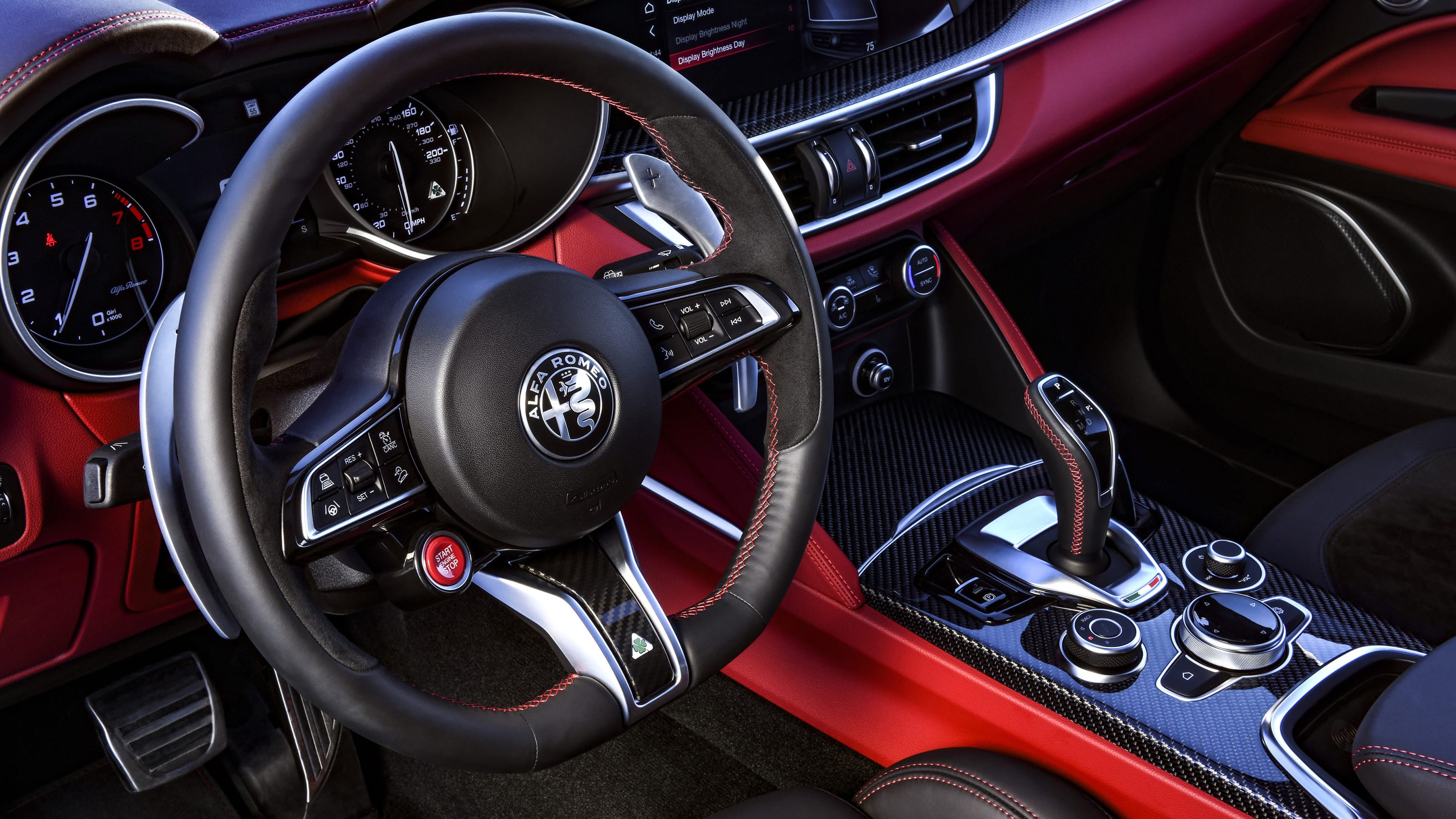 Then we get to the infotainment system, which is a huge leap forward over the old version. It now comes standard with an 8.8-inch screen, rather than the old 6.5-inch display. It also features touch-sensitivity in addition to the console-mounted scroll wheel, offering users the sort of redundant input choice many systems now provide. It’s particularly handy for functions designed with touch in mind, such as Apple CarPlay. The menu design has also been changed from the BMW-style list of options to large tiles with information. They have easy-to-read text and fewer layers of menus, making for easier navigation.

Unfortunately, the system runs rather slow, which is especially evident when touching the screen. It takes a moment to register taps and swipes, making for a disappointing experience. And while the infotainment system is a significant improvement over the old version, it comes up short compared to the competition. BMW, Audi and Mercedes all use much larger, brighter, faster infotainment systems. They feature slicker presentation, with Audi being able to display large maps on the instrument cluster, and Mercedes offering in-depth visual customization and trick features like augmented reality navigation, among other features. 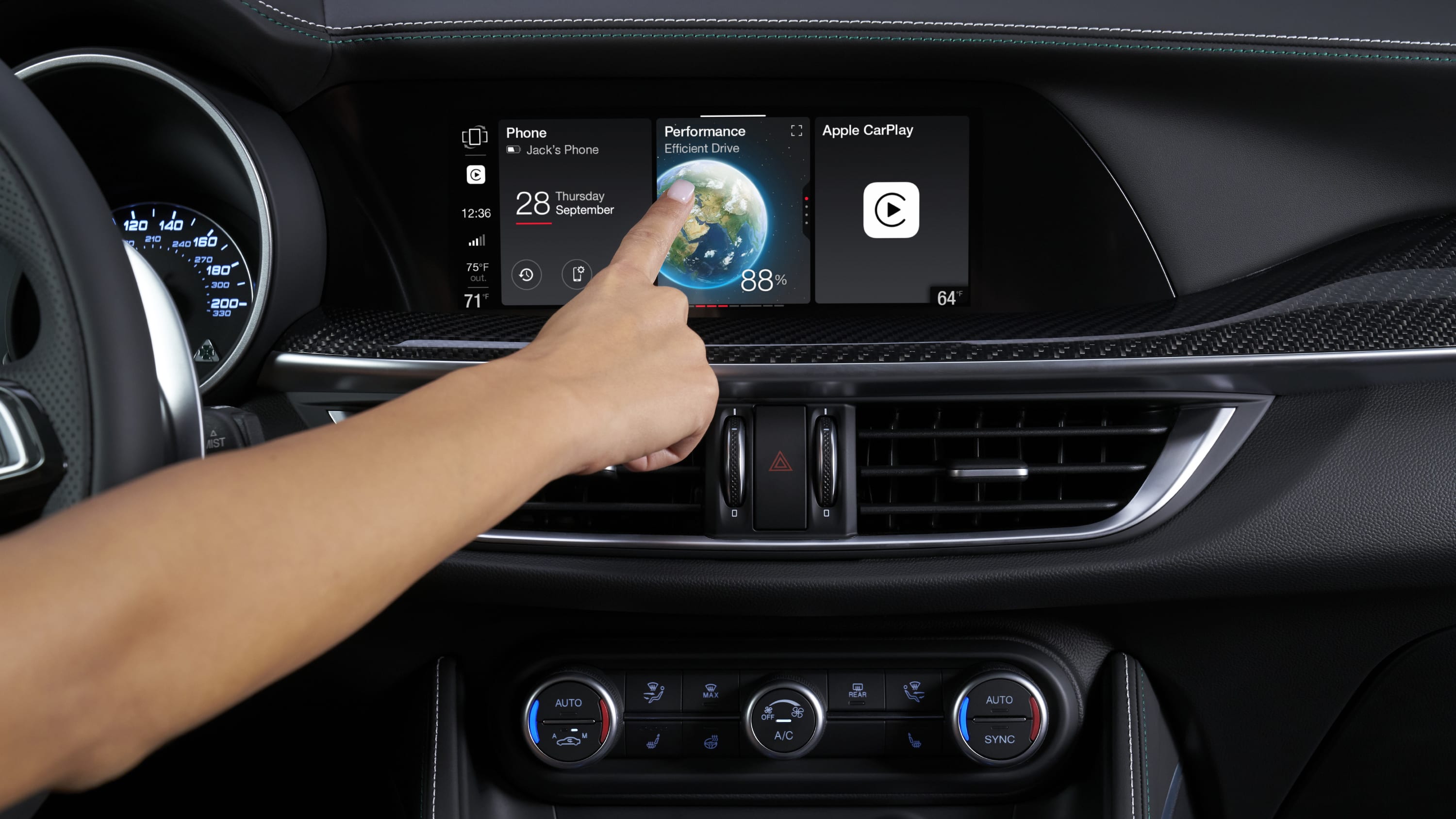 Helping make up for some of this technological shortfall are the Stelvio Quadrifoglio’s new and/or upgraded driver assist features. They come as part of the Active Driver Assist Package and include adaptive cruise control with low-speed and stopping capabilities, lane-centering, automatic high-beams, traffic sign recognition and a driver inattention warning system. These are featured on top of the automatic emergency braking with pedestrian detection and blind-spot warning. The adaptive cruise control with lane-centering is quite impressive, controlling the car on the highway with hardly any nervous self-correcting, nor much need for driver intervention. It’s certainly on par with systems from other luxury makers.

The Alfa has one last issue, and that’s price: $82,095 to be precise. It has two chief competitors in the form of the BMW X3 M and the Mercedes-AMG GLC 63. The BMW starts at $70,895 and the Mercedes at $74,745. So you could save between $8,000 and $11,000 by choosing one of those German sports crossovers. The Alfa is still the most fun to drive, and it boasts the most power, but both the BMW and Mercedes are exciting, too. The X3 M’s straight-six is hyper responsive, and the Mercedes-AMG’s V8 has an amazing rumble. And though they’re down on power, the Mercedes makes more torque, and the BMW is only down by 1 pound-foot to the Alfa. They each have higher-quality interiors, too, though the BMW is generally lacking in personality.

Still, if you’re looking for a sporty crossover that feels like a willing companion on backroads, one that is constantly a joy to drive, neither the BMW nor the Mercedes matches the Alfa’s fun and frisky feeling. And the price premium and interior downgrade is worth it for the people that value that driving experience. This is a crossover you buy with your heart, not your head. 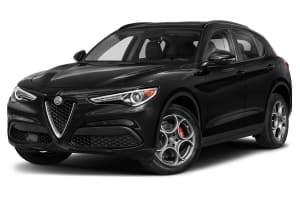 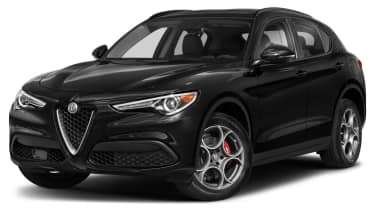 $5,781 - $5,781 Nat'l avg. savings off MSRP
See Local Pricing
I'm not in the market for a vehicle at this time. Please move this suggestion to the side for 30 days.
Huge Savings