$175,000 for the limited edition rocket, once lockdown ends

In the middle of 2018, Lister unveiled what was then called the LFP, intended to be the world's fastest SUV. The initials stood for Lister F-Pace and the dark green hulking beauty was based on, surprise, the Jaguar F-Pace SVR. Except where the F-Pace SVR used a supercharged 5.0-liter V8 producing 550-horsepower to claim a 176-mile-per-hour top speed, the LFP would wring that engine out to 675 horsepower in order to hit 200 miles per hour. Since that time, Lister's rolled out other models such as the F-Type convertible-based LFT-C 666 and Knobbly roadster continuation cars. At last, the LFP is ready for primetime, and it brings the new name of Lister Stealth with it. According to CEO Lawrence Whittaker, all the firm is waiting on is for the UK's lockdown to end, then the high-rise double-ton party can start. For now, we have a teaser video with a few quick visuals of the dangerously aggressive bodywork and a microphone-melting clip of someone dancing on the throttle. Save for the audio distortion, it looks and sounds superb.

The ingredients of the transformation from F-Pace SVR to Stealth remain secret. As Pistonheads pointed out, the 675-hp Lister Thunder, based on the F-Type SVR hardtop, installed a new supercharger pulley, air filter and intercooler, a freer exhaust, and a remapped ECU to unlock 100 more horses. It's reasonable to expect the same template as a starting point for the Stealth.

If the crossover can hit its 3.5-second mark from zero to 62-miles per hour, it will beat everything we can think of that isn't a Tesla, and the Stealth will top all comers if it nails the promoted top speed. Whittaker said production stops at 250 units, with orders having already come in. The price starts at "around £140,000," equal to about $175,000 greenbacks. Tiff Needell, who raced Lister cars in the 1990s, has been lined up for video presentation work once the proper launch takes place. If we're lucky, Needell will be the one to show and tell us what the Stealth can do, occasionally sideways, with lots of smoke. 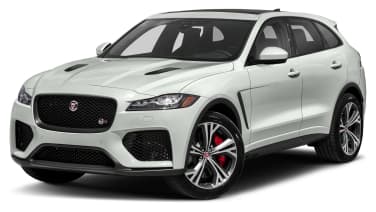 $2,734 - $3,809 Nat'l avg. savings off MSRP
See Local Pricing
I'm not in the market for a vehicle at this time. Please move this suggestion to the side for 30 days.
Huge Savings