Keeping it old-school is harder than it seems

England-based Morgan developed the Plus Four to replace the Plus 4 at the bottom of its range. Confused? Showing you photos of the two cars likely won't help, because they look almost exactly alike. That's intentional, and the company told Autoblog transferring classic proportions onto a new platform was stunningly difficult.

"The most important thing was recognizing the classic Morgan silhouette still had a place in the market. It was significant to keep it alive. The challenge was then to get the Plus Four body on top of our new platform while packaging the tech and the powertrain that comes with it," explained Jon Wells, Morgan's lead designer.

The outgoing Plus 4 used a live rear axle, leaf springs, and rear drum brakes; the new Plus Four (pictured) has none of those. It instead comes with an all-independent suspension and discs all around. Morgan also added power steering, ABS brakes, and even creature comforts such as automatic LED headlights without increasing the car's footprint or altering its stance. The Four shares just 3% of its components with the 4, the company pointed out.

Opening the long hood reveals a turbocharged, 2.0-liter four-cylinder provided by BMW. That's the first time Morgan has put a turbo four into one of its cars. It spins the rear wheels via a six-speed manual transmission, but buyers can order an eight-speed automatic gearbox at an extra cost. The decision to adopt forced induction created additional challenges for stylists as they tried not to stray from the original model's lines.

"The engine is a lot hotter, so we had to package a lot more radiator, a lot more cooling, plus air intakes and exits without covering the car in additional louvers or resorting to using a larger grille," Wells pointed out.

With the styling signed off, engineers began the process of fine-tuning the Plus Four to ensure it feels like a Morgan -- it has to be analog, playful, and visceral. "We had this expression, and we don't mean it in a bad way: this is not going to be a [Mazda] MX-5, which is absolutely sorted in every possible way," Wells summed up. They nonetheless aimed to make it a little bit easier to live with on a daily basis than its predecessor. 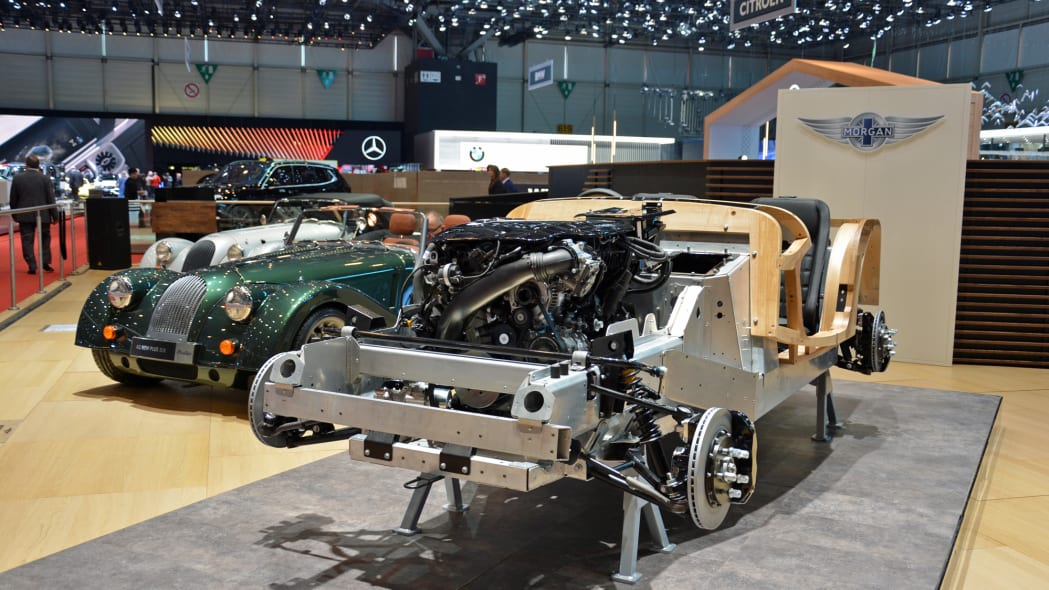 The Plus Four is more revolutionary than it looks, then, but some things never change. It's still made largely by hand, and its body panels are still hammer-pounded into shape over an ash frame. It's not there as a novelty, either. Wells said working with wood allows Morgan to make changes more quickly than it if used heavy machinery. Ash is ideal because it's stable, it doesn't have any knots, and it doesn't move over time like pine or cypress, for example. It also naturally absorbs sound and vibrations, so it's a key piece of the Morgan experience. Our images of the Plus Six (above) illustrate how Morgan weds aluminum and ash in its production process.

America is finally on Morgan's radar. The company hopes to begin selling the bigger Plus Six on our shores by the end of 2020, and it expects the first examples of the Plus Four will arrive in the next 12 months.