A job listing by the Ford Motor Company might have leaked the next-generation Mustang's launch year.  As spotted by a forum user on Mustang 6G, the post mentions a "Ford 2023 Mustang S650 vehicle program" and says the car launches in 2022.

Roughly three weeks ago, Ford ramped up a search for a "Wind/Road Noise and Air Leakage Plant Vehicle Team (PVT) Engineer" for the Flat Rock Assembly Plant in Flat Rock, Michigan. Ford has the job posted on a company site, as well as on LinkedIn. The opening paragraph of the listing has some particularly important information about the next-generation of the Mustang:

Be part of the proud team to deliver Ford and Lincoln quality on the current model Mustang (S550) and be the final sign off on the Ford 2023 Mustang S650 vehicle program before it goes to the customers.For this position, you will have primary responsibility for delivering Wind/Road Noise and Air Leakage and work with a strong team of other Ford PVT engineers at the plant as well as supporting the V11/V12 VFG in Dearborn as needed.

The current-generation Mustang's internal code is S550, and the next-generation's code is believed to be S650. If the job posting is accurate, that means the next Mustang would launch as a 2023 model. Further down the listing, one of the job's "responsibilities" is "on-site launch lead for Wind/Road Noise and Air Leakage attributes when S650 launches in 2022 as a 2023MY." That seems to at least confirm the first mention isn't a typo. 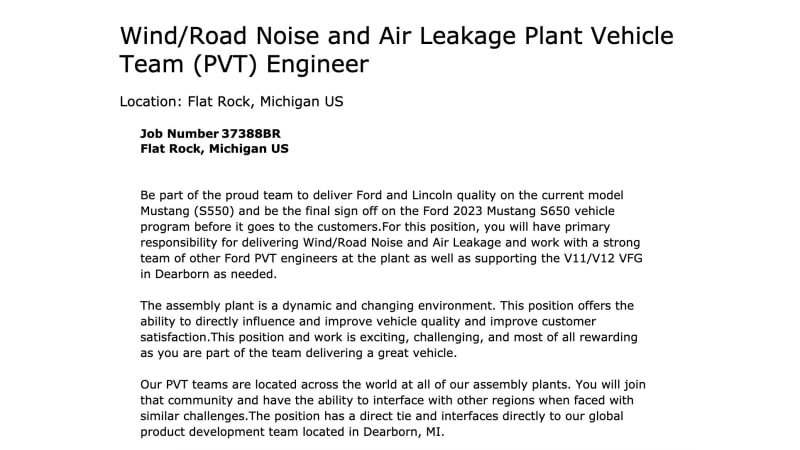 The Mustang nameplate has grown and evolved throughout the past year. In addition to the launch of the GT500, Ford also launched the all-new Mustang Mach-E electric crossover. Much has been anticipated and rumored about the next steps for the Mustang, but there have been rumblings about a Mach 1, as well as a hybrid variant. 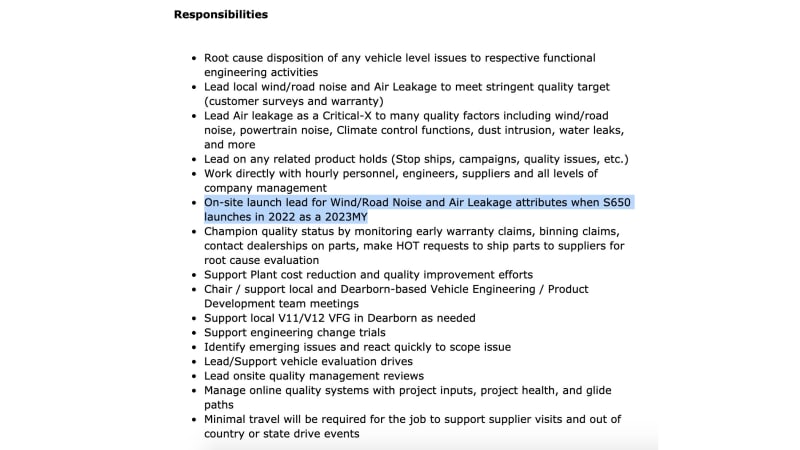 Ford has yet to reply to an email with comment, but to be clear, this is technically speculation. It is possible codes have changed, or other circumstances could affect timelines in ways we don't know about. We will update this space when Ford responds.