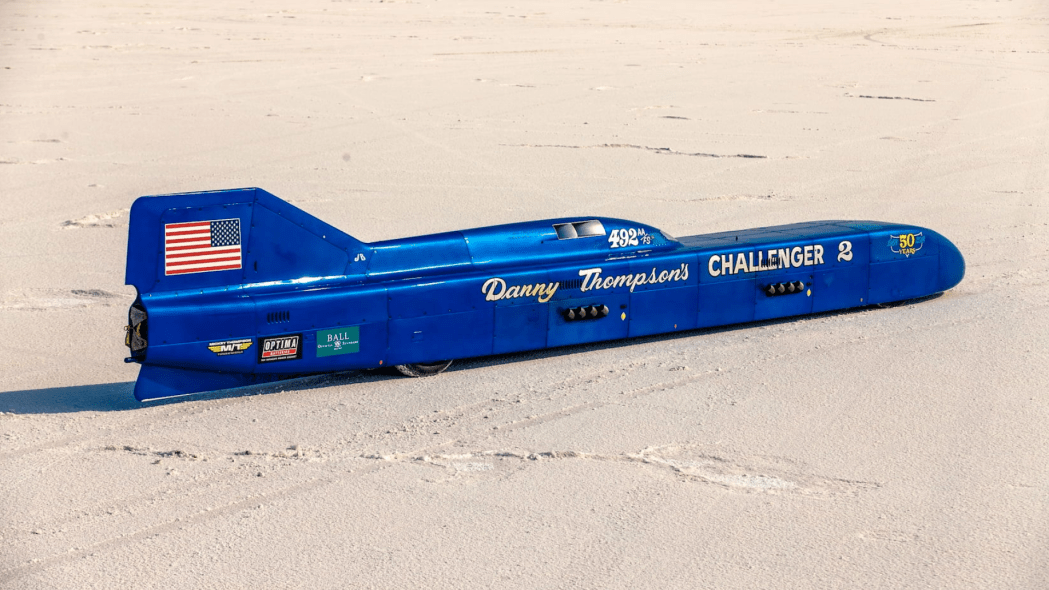 The history-making 1968 Challenger 2 Streamliner that set the record for fastest piston-engine vehicle has a new owner after selling at the Mecum auction in Kissimmee, Florida, over the weekend.  And while its hammer price of $510,000 may have been well below estimates of between $900,000 and $1.5 million, it comes as welcome news to its longtime owner.

Danny Thompson is the man who set the record in 2018 by driving the Challenger 2 to a record 448.757 mph at the Bonneville Salt Flats. Yet the 71-year-old told Autoweek that he’s been living on Social Security, his wife hasn’t had a reliable car to drive, and they have debts. “I made the biggest mistake you can make in motorsports,” he told the publication. “I borrowed money to go racing.”

The 1968 Challenger 2 Streamliner sells for a hammer price of $510,000! ... Check out the link in our bio for the full story behind the world's fastest piston-driven vehicle driven. ... #MecumKissimmee #Kissimmee #Mecum #MecumAuctions #WhereTheCarsAre

The $510,000 hammer price doesn’t include fees for Thompson or the buyer, but it does include the Ford diesel pickup and trailer that transported the streamliner to the auction, after Thompson agreed to scrap the reserve and include both if bidding topped $500,000.

Thompson is the son of legendary drag racer and engineer Mickey Thompson, who built the original version of the Challenger 2 as a successor to the Challenger 1, which he raced to an unofficial 406.6 mph at Bonneville in 1960. The Challenger 2 was built with financial and engineering help from Ford’s Le Mans team with the goal of breaking the speed record in 1968. Unfortunately, that effort was for naught, as rain and flooding prevented the attempt and Ford pulled its racing sponsorships. Mickey Thompson and his wife were murdered by hitmen in 1988; a former business partner of his was convicted in 2007 of hiring the hitmen, who have never been identified, and sentenced to two consecutive terms of life without parole. Danny Thompson pulled the four-wheel streamliner out of storage in Vancouver in 2010 and began restoring it for another go at the record, including replacing the old Ford 427 engines with a pair of Hemi V8s running on 87% nitromethane and 13% methanol.

The record-holder told Autoweek the only prize he received for his 2018 feat was a hat.

It wasn’t the only piece of automotive history from that fateful year to make news at Kissimmee. The infamous 1968 Ford Mustang used in the film “Bullitt” and its epic car chase hammered for $3.74 million including auction fees, which was reportedly just shy of the auction record for an American muscle car.