Toyota GR Yaris has the world's most powerful three-cylinder

It's a tiny monster The Toyota GR Yaris has finally been unveiled at Tokyo Auto Salon, and it's better than we expected. It actually makes more power than previously reported, with 268 horsepower and 273 pound-feet of torque. It comes from a turbocharged 1.6-liter inline-three cylinder engine, making it the world's most powerful three-banger. Toyota says it will get to 62 mph in 5.5 seconds.

But the engine is only the start of a monster hatchback. It comes with a six-speed manual transmission that's matched to an all-wheel-drive system that uses a multi-plate clutch center differential to divvy up power, with three different settings (Normal, Sport and Track). As previously reported, the default split is 60/40 front/rear, with Sport switching to 30/70 and Track going with 50/50. Both ends of the car can be fitted with mechanical Torsen-type limited-slip differentials.

The chassis has seen a number of upgrades, too. The front suspension continues to use MacPherson struts, but the rear has been changed to a double-wishbone independent design. The front brakes now have 14-inch slotted rotors and four-piston calipers, and the rear brakes have 12-inch rotors clamped by two-piston calipers. Weight is kept to 2,822 pounds through the use of aluminum doors, hatchback, hood and a carbon fiber roof. 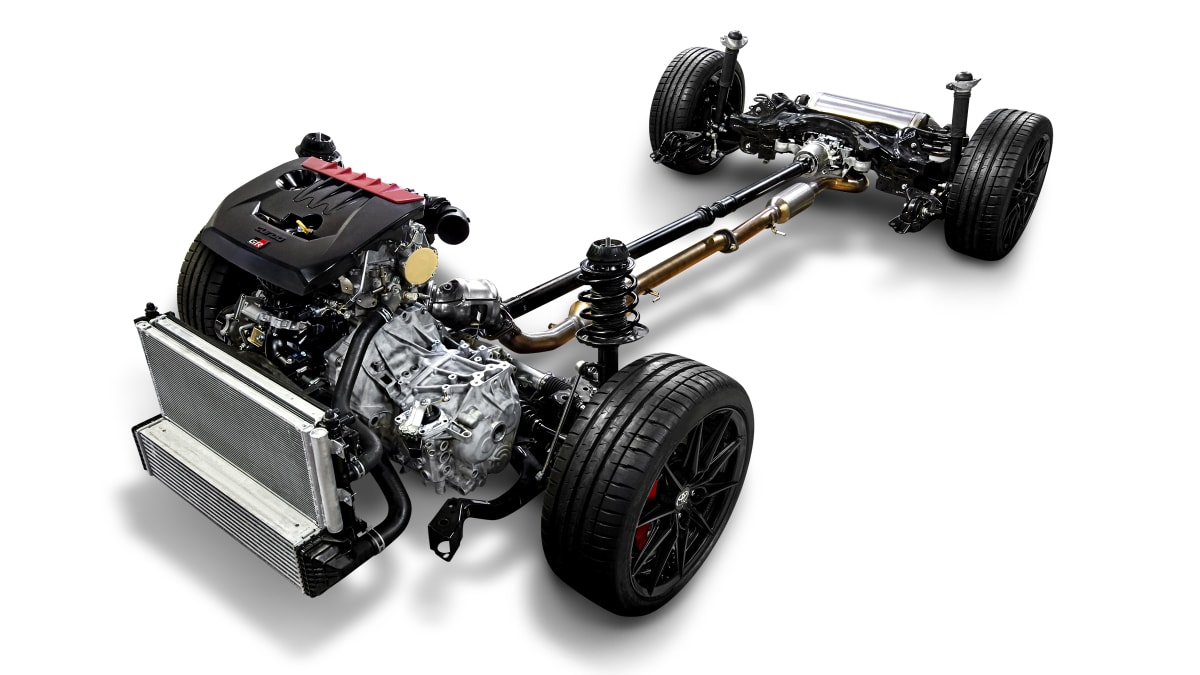 One other cool note about the GR Yaris is that, while its production will play a role in the homologation process for a rally car, it's also a result of Toyota CEO Akio Toyoda's desire for such a car. According to Toyota, he had a chance to drive a WRC car with Tommi Makinen Racing and enjoyed it so much he wanted Toyota to build a production car with similar characteristics, and he kicked off the project in 2016. Apparently Toyoda-san will also be the one to approve the final tuning of the car.

Tragically, it's practically certain we won't get the GR Yaris here. It would likely be too expensive to attract an audience in America, since it's being built on a special assembly line and has so many changes to the base Yaris. On top of that, the Yaris it's based on won't be offered here, so Toyota would have to certify the GR's safety and emissions equipment from the ground up.

We can offer a sliver of hope, though. Toyota noted that the GR Yaris platform is a blend of Toyota GA-B at the front, which is shared with the normal overseas Yaris. The back half of the car is based on the GA-C platform. That platform underpins several Toyotas offered in America including the Toyota Corolla, C-HR, Prius and Lexus UX. It would probably still be a long shot, but that makes us wonder if Toyota could borrow at least the all-wheel-drive system to stick in a Corolla or C-HR for America, maybe with a different engine, too. We can dream, right?