It's impossible to know which parts of this story are true and which are manufactured YouTube madness, so we'll start with what we think we know. The Russian-language site Capital on Onego (translation) reported that two men showed up at the airport in Petrozavodsk, Russia, roughly 150 miles from the Finnish border. They paid 250,000 rubles ($4,040 U.S.) to have a helicopter lift a 2018 Mercedes-AMG G63 to an altitude of 1,000 feet, then drop the SUV. All the way to the ground. To go "CRONCH!" Then, after posing for photos on the wreckage with their friends, the men paid a tractor to haul the hulk of the G63 to a scrapyard. The best we get for evidence of the incidents described is in the video above.

The backstory and the run-up are murkier. Russian-language site Kolesa (translation) describes the man fronting the video as "the young and very ambitious blogger" Igor Moroz, known for his propensity to stage pranks and for his 2.7 million Instagram followers. In the video, Moroz explains that he saved up to buy his dream G-wagen – which costs around 16.8 million rubles ($271,488 U.S.). – in March 2018. He said he had to return to the dealer every month for unscheduled maintenance, the truck spending up to a month at a time in the shop, the dealer unwilling to fix some warrantied parts under warranty. Finally, Moroz says he got fed up, hence the helicopter hooliganism.

Or maybe not. Both Russian papers and English-language site The Moscow Times said there was a bet involved, between Moroz and his partner. Paradoxically, Moroz appears to have won the wager, apparently saying to the camera as the helicopter takes off, "I won the bet, time to lift the Gelik [Geländewagen]." The Moscow-based vlogger's team had to head to the hinterlands to pay out because no airport in Moscow would agree to the stunt, fearing investigation by Russia's Transport Police. Kolesa says Transport Police in the Karelia region are now investigating. Russian police charged a different Russian prankster in April this year with "hooliganism with dangerous weapons," after the man smashed his car with a sledgehammer on a public road for social media.

We'll never know how much of Moroz's video comes from legitimate frustration, but we know it is 100% stunt. Everything in the video gets a sponsor sticker, including the helicopter and the G-wagen, and according to AutoEvolution, after the smash, Moroz first offered five subscribers the chance to win $1,000, then upped that to a raffle for five subscribers to win a car each. All of which makes Moroz the more enterprising version of other Frustrated Men Making a Point, like the Chinese man who paid three people to destroy his Maserati outside a car show in China in 2013, the South Korean man who sledgehammered his Mercedes-AMG S 63 in 2015, and our own Daniel Gagliardi who crushed his 1970 Dodge Charger out of spite. 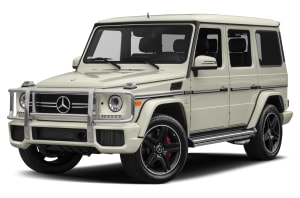