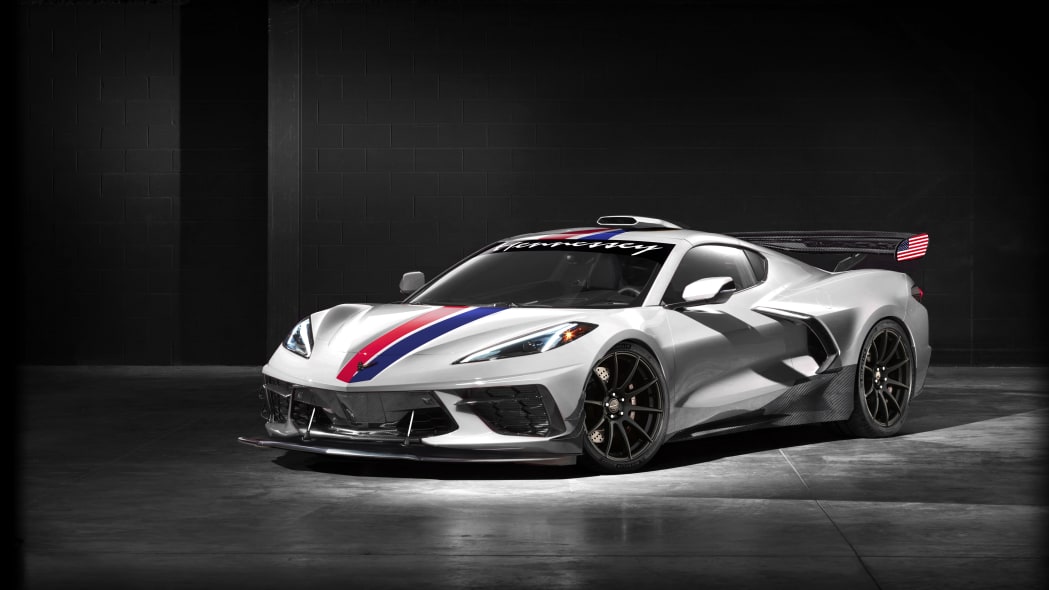 It was bound to happen at some point, but now we’ve heard it straight from the horse’s mouth. Hennessey has designs on giving the 2020 Chevrolet Corvette much more performance than it has from the factory. The Texas-based company says it plans to offer a 1,200-horsepower version of the C8 called the HPE1200.

Hennessey claims it’s going to make this massive amount of power with specially built twin-turbo LT2 V8 engines. The engines will have upgraded internals such as forged aluminum pistons, forged steel connecting rods and other unspecified upgrades. To handle the power, Hennessey says it’s going to “incorporate an upgraded and fortified factory dual-clutch automatic transmission and a full Brembo brake system" among other chassis upgrades.

The pictures you’re looking at are only renderings, courtesy of Hennessey, so the car doesn’t exist yet. It’s a menacing look, if this is what Hennessey ultimately ends up with. We’re in love with the roof scoop, which may become necessary as Hennessey attempts to keep 1,200 horsepower cool. That wing may be a bit overkill, but this car is bound to be ridiculously quick.

Hennessey doesn’t offer up a price or expected sell date for this HPE1200 kit, but it does detail a few other upgrades it’ll put on sale first. New C8 owners can expect a stainless steel exhaust system, a supercharger upgrade good for 700 horsepower and possibly more “once computer tuning becomes available for the new C8 platform.” Hennessey is taking suggestions from the crowd, as well. An online questionnaire is available to let them know exactly what you want to spend your many thousands of dollars on. More power in a car that does 0-60 mph in under three seconds from the factory sounds a bit mad, but that’s what Hennessey does.

One last interesting stat from this news comes from John Hennessey himself. He says they’ve modified over 500 C7s so far. We’ll be interested to hear what the true demand might be to make the already bonkers quick C8 go faster in a straight line.