This crossover takes the Sonata's lighting tech one step further Hyundai just pulled the wraps off a design-focused concept, and it’s called the Vision T Plug-in Hybrid SUV Concept. From a size perspective, the Vision T Concept is a touch larger than the current Tucson (5.3 inches in overall length). Hyundai didn’t explicitly say that the “T” in the name signifies that this concept previews the next-gen Tucson, but it probably isn’t a bad guess to make.

We wish we could give you powertrain specs for this concept, but Hyundai hasn’t released any information concerning those details besides saying it’s a “plug-in.” Instead, the goal is to present a “vision of the new urban adventurer SUV.” There are a few specific design details worth delving into.

Hyundai says the two major design themes on display here are “Parametric Fantasy and Transcendent Connectivity.” Yes, that’s actually what Hyundai’s press release says. The air shutter grille design is called a “Parametric Air Shutter,” and it’s even more advanced than a regular active grille design. When the car is stationary, the grille remains closed and doesn’t move. Normal. Once in motion, Hyundai says each individual “cell” of the grille design moves in a prescribed sequence. It’s meant to create a “dynamic forward demeanor” while also providing proper cooling to the engine within. The grille reminds us of the strange grille design seen on the next-gen Tucsons in spy shots we’ve published. Perhaps there’s a version of this on the way to production. 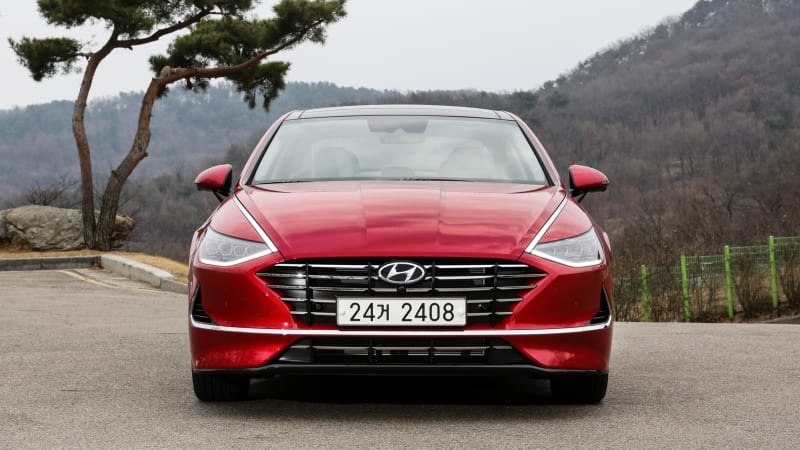 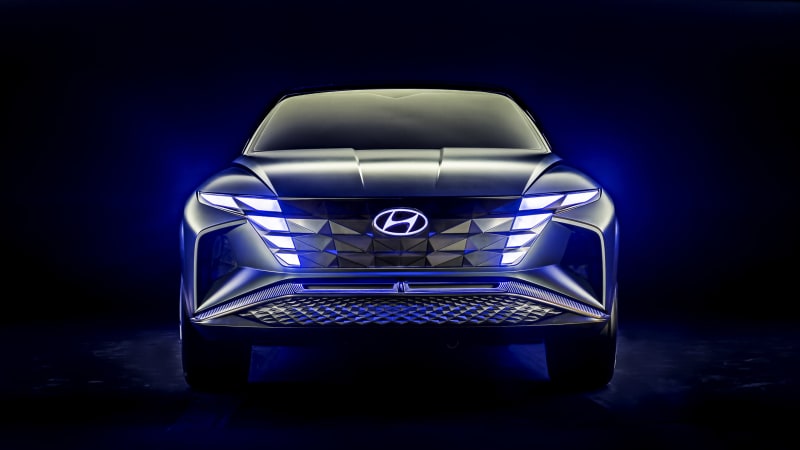 The lighting elements of this Vision T Concept are pretty neat, too. Like the new Sonata, the DRLs are hidden. When the car is started, the chromium-looking elements turn on and illuminate like regular LEDs. It’s nearly impossible to tell that the “lights” in the grille are actually lights until they’re illuminated. Hyundai also slapped a light-up “H” badge on the front and back of the Vision T. Speaking of rear lights, Hyundai says they’re programmed to extinguish in a fantastical sequence, with the Hyundai badge being the last light to go out. How nice. Lastly, there’s a glass pattern of purple light embossed into the roof of the car.

We’re particular fans of looking at the Vision T in profile. There’s nothing subtle about those body creases, as the crossover takes on an aggressive stance. The wheels are obviously way too large, but the calipers within are rather pretty.

Hyundai found a nifty hiding spot for the charge port, too. You’re almost certain to miss it if someone doesn’t point it out. The black cladding on the passenger side rear houses the flap that slides out automatically. It’s a neat integration that cleans up the fender design. We wouldn’t mind seeing this on a production car if it’s actually possible. So, is any of this especially “transcendent?” No, but it makes us more excited to see the next-gen Tucson. 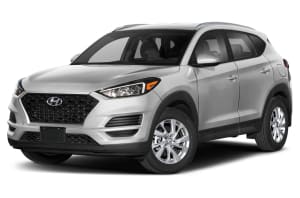