One is for the desert, and the other belongs on a track

The two concept motorcycles Ducati teased in October 2019 were unveiled during the 2019 EICMA show taking place on the outskirts of Milan, Italy. Named Desert X and Motard, respectively, they're based on the existing 1100 and 800 variants of the Scrambler.

Official details and photos about the design studies are shockingly scarce. We know the Desert X draws inspiration from the Ducati-powered models that have previously competed in the grueling Paris-Dakar Rally. Riding on knobbly tires, it wears white body panels accented by retro-styled red, gray, and black stripes, and it features a futuristic interpretation of the twin round headlights seen on models like the Cagiva Elefant that took first in the 1990 Paris-Dakar. The bike was proudly sponsored by cigarette maker Lucky Strike, but Ducati unsurprisingly chose not to link arms with the company in 2019, and it decided to leave its logos off the body panels.

Like the Scrambler 1100, the Desert X is powered by an air-cooled, 1.1-liter two-cylinder engine. Technical specifications remain under wraps, but the stock 1100 offers riders 86 horsepower at 7,500 rpm and 65 pound-feet of torque at 4,750 rpm.  The concept was designed for long-distance travel, so Ducati added a second fuel tank under the saddle to increase its range. An upswept exhaust and a skid plate ensure the drivetrain doesn't have an expensive encounter with a rock. 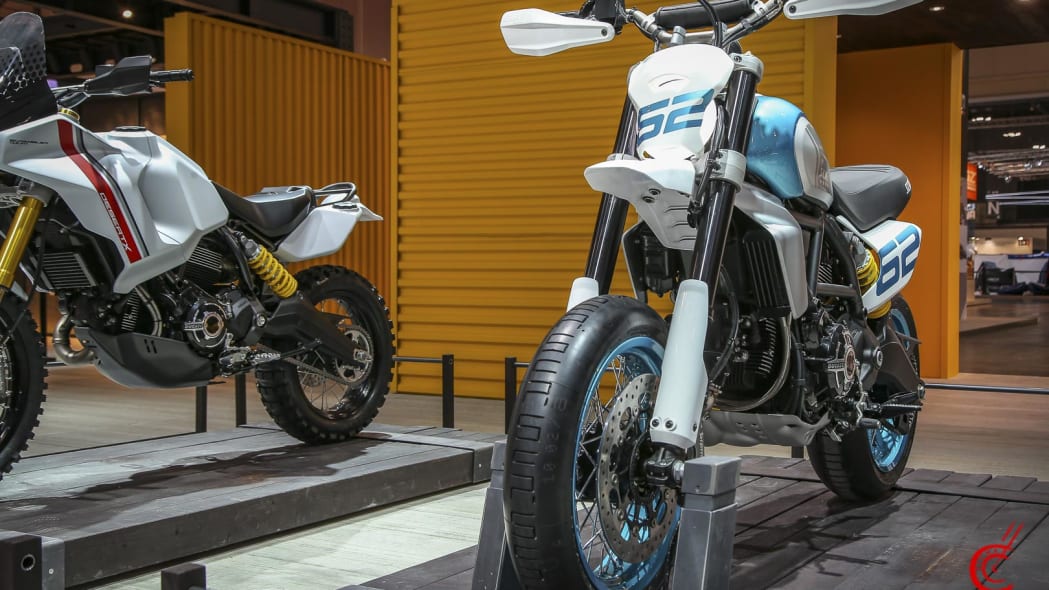 The Motard concept takes the Scrambler nameplate in a completely different direction than the Desert X. It's dropped on slick tires provided by Pirelli, and it's fitted with a pair of hand guards on the handle bar. The racing regalia suggests it was designed to hit the track.

It's easy to picture the Desert X locking horns with Honda's Africa Twin as a more off-road-friendly alternative to the Desert Sled, which is also an evolution of the Scrambler, but Ducati hasn't revealed what the future holds for its two design studies. We'll learn more about them in the coming months.