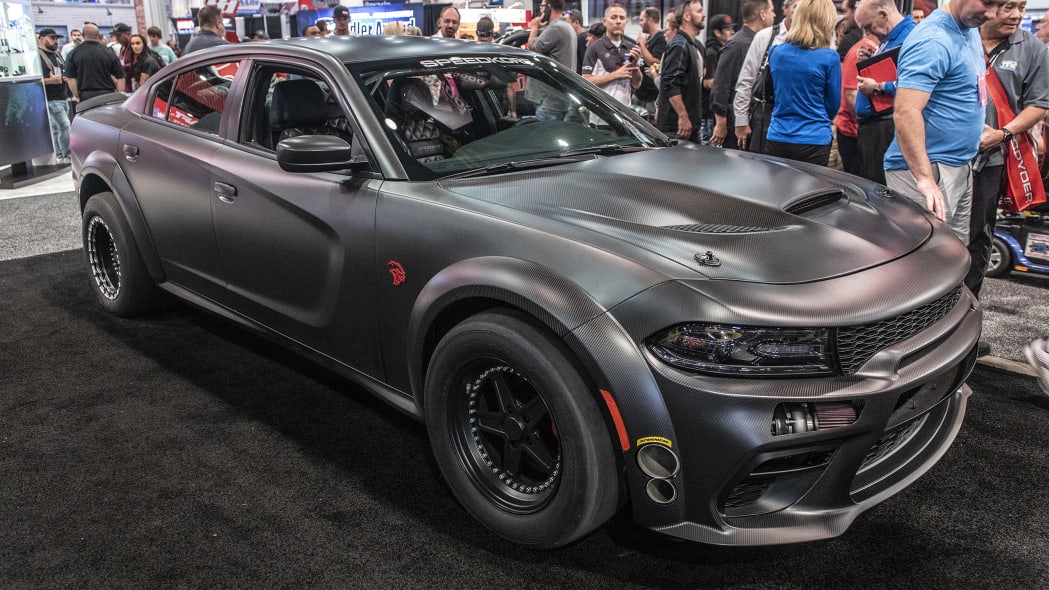 The backstory the Speedkore Performance AWD twin-turbo Carbon Charger teased a couple of weeks ago might be cooler than the car itself. Alan Palermo commissioned the carbon-fiber-bodied Dodge Demon Speedkore brought to SEMA last year, the one that supplanted the 6.2-liter Hellcat V8's supercharger with twin 6875 Precision Billet T4 turbos. That blasted the Demon's usual 840 horsepower up to 1,400 hp at the flywheel, 1,203 hp at the rear tires, good for an 8.77-second quarter-mile time at 162 miles per hour. Palermo's older brother remarked, "He liked the car but was more of a four-door guy," so Alan commissioned the AWD Carbon Charger as a 65th birthday gift for his sibling.

Speedkore worked with Magnaflow on the sedan, starting with a 2019 Charger Pursuit as a base. The Wisconsin tuner secured a 2020 widebody Charger from Dodge, then 3D-scanned the bodywork to create the molds reproducing most of the sheetmetal in pre-preg carbon fiber. The hood, bumpers, fenders, rockers, rear spoiler, and rear diffuser are all fashioned from the lightweight stuff.

Hellraiser Performance engineered a new transmission working an FTI torque converter at one end and a carbon fiber driveshaft at the other. Instead of fortifying an off-the-shelf AWD system, Traction Products supplied a custom transfer case machined from billet shunting power to a set of Bogart Competition Series wheels wearing Mickey Thompson ET street rubber.

Speedkore fitted last year's Demon with a front-exit twin exhaust, with a single opening on each front fender, and left the rear bumper cutouts for the traditional exhaust empty. With the Carbon Charger sedan more of a family guy, Magnaflow sorted out a quad-pipe front-exit exhaust with two openings on each front fender, and ran a three-inch stainless steel Competition Series exhaust to the rear. The driver can switch between the two, the latter version providing a "moderate interior sound."

The folks at Speedkore say they'll keep tweaking the Carbon Charger after the show to get it right for the senior Palermo. We say, "Happy birthday, sir. Enjoy."