Mopar fans have countless reasons to get hyped about the 2019 SEMA show. Speedkore is bringing a twin-turbocharged, all-wheel-drive Dodge Charger Hellcat Widebody, Mopar is bringing a done-up 1968 Dodge D200 "Lowliner," Ram is bringing a diesel 1500 overlander, and Jeep is bringing a custom off-road Wrangler. But the launch of the new 2020 Dodge Challenger Drag Pak might garner the most attention from the brand's most serious customers.

Prior to the show, Mopar teased a photo and a short video clip, both showing a new Dodge Challenger from the overhead view. The white Challenger showed a wide blue stripe down the center of the car with two pinstripes along each side. "Powered by SRT" runs across the top of the windshield, and Mopar logos grace both sides of the car just beneath the side windows. Red decals run back from the rear quarter panels and connect across the rear of the car. It also has hood pins on the SRT Hellcat hood and a parachute attached the rear. 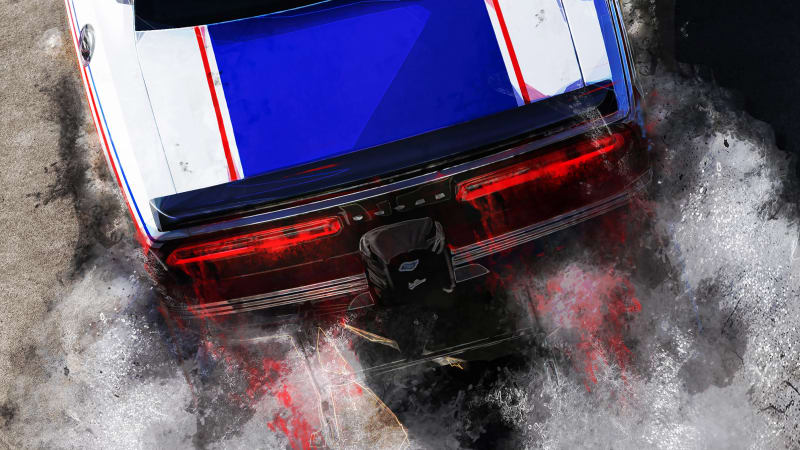 There's a parachute because this is the factory turnkey drag-race-focused Dodge Challenger racecar. Mopar released no other information on what type of hardware the Drag Pak will be using, or what's under the hood, but the video gives a great preview of the exhaust note in full tire-smoke mode.

As some Drag Paks in the past have dropped roughly 1,000 pounds from their production starter vehicles, the 2020 model will surely utilize plenty of weight-savings methods such as the removal of all interior comfort features that don't apply on the racetrack. Mopar has also previously altered the position of the engine and changed the wheelbase to the benefit of better weight distribution.