It’ll turn you into an off-roading junkie Only a few vehicles in the world can label themselves a truly unique proposition. In this case, we’re not using the word unique lightly. Some cars may have a unique aero setup or suspension technology, but establishing your own segment? There’s a lot to be said for a company sticking its metaphorical neck out, hoping that its creation finds success. Mahindra currently has its neck on the chopping block in America with the Roxor, so let’s take a look at what’s for dinner.

The last vehicle sold in the United States that’s comparable to the Roxor was a Jeep – from roughly the Eisenhower administration. Those were at least road-legal due to very different safety requirements. This one, however, as it's sold in the 21st century, is very much illegal to drive on public roads. Mahindra makes no qualms about that, and even though we've seen at least one person driving a Roxor through rush-hour traffic, doing so is neither legal nor recommended. It's for off-roading only, and trust us, you’re going to want to stay off the pavement with this thing any way.

Our first crack at the Roxor was out west on the rocks, but this second drive brought us back home to Michigan at a large hops farm. Mahindra brought us here — mere minutes from the company’s manufacturing facility — for us to witness the Roxor hard at work, rather than hard at play. We prefer the latter, but the Roxor can do both. Most UTVs on sale today are far less capable than the Roxor from a work perspective. The Roxor can tow 3,500 pounds, and you can dump 349 pounds of stuff into the bed. It has a real transmission (more on that later), rather than a rubber band CVT as found on most UTVs. You can also lock it into 4WD Low when the going gets tough. A 2.5-liter four-cylinder turbodiesel provides some real shove, rated for 62 horsepower and 144 pound-feet of torque. Although there's a splash of 2019 tech – digital tachometer, Bluetooth audio, optional air conditioning – the driving experience is all old school. It's sort of how an old Willys might be if it was sold new today.

After watching some farmers harvest some hops from their massive estate and hauling them back to the processing equipment with a Roxor, it was our turn. We had the run of the entire farm, including a seriously rutted open field. Spoiler alert: None of it phased the Roxor in the least. Mahindra knew the Roxor wouldn’t be horribly taxed in this environment, so it gave us a chance to test something else besides its ability to crawl through rocks. 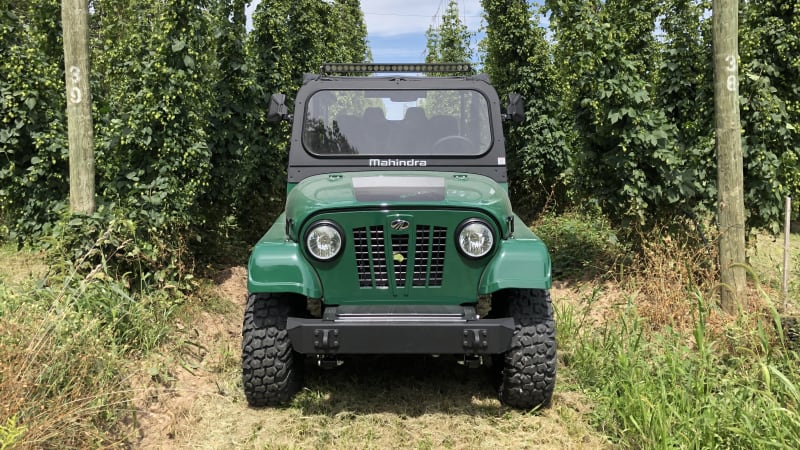 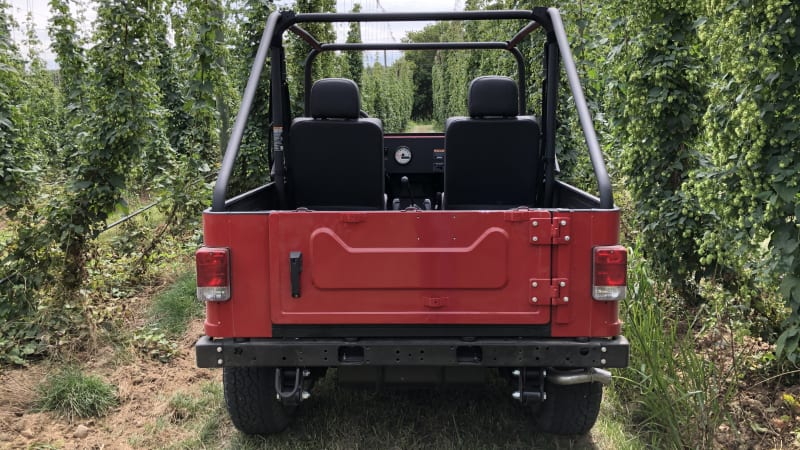 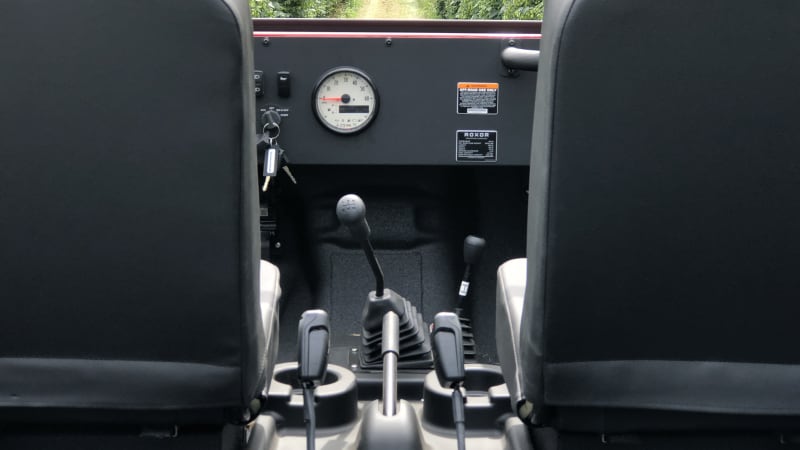 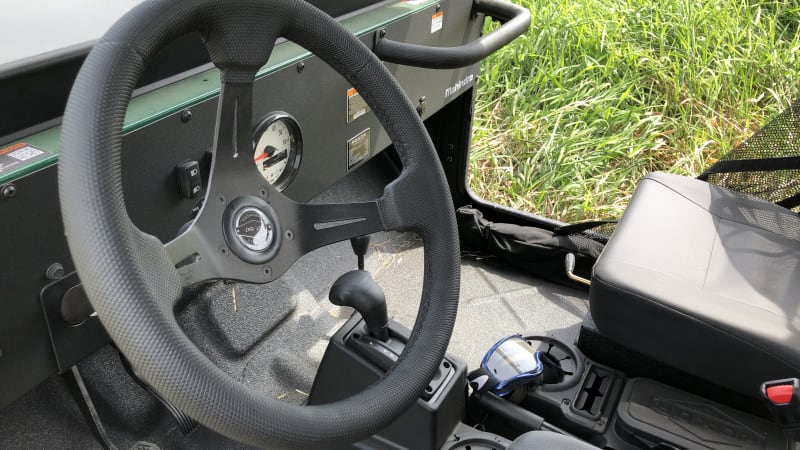 Just as we assumed, the Roxor is a hoot on essentially any surface. Pop it into 2WD on a high-speed loose gravel trail, and all of a sudden, you’re flying through the trees with the tail hanging out. Get it on a slick, grassy and muddy knoll, and it’ll do donuts to your heart’s content. The worse the road, the more fun you’ll have with the Roxor, but we were still having a blast on flat surfaces. That’s when we sent it into the rutted, muddy clearing Mahindra prepped for us.

Without a smooth road under the knobby tires, the Roxor really jostles you around. Sudden and violent undulations at speed fling your butts from their seats as tall grass whips by the open side cutouts (don't worry, there are full car-style seatbelts). It’s exhilarating to fly through this field, trusting the Roxor to shrug off anything it may encounter. Mahindra cut it in the shape of a road course, letting us do laps of the rough terrain, over and over. Rain the previous night meant that we were slinging mud and getting dirty every time we hit an especially torn up area. Getting a little dirty is part of the Roxor experience, too. If you ticked the box for the optional windshield, just know that you’re missing a crucial part of driving a Roxor. Feeling the wind whip over you, completely exposed to the elements is half the fun in high-speed off-roading.

Just hope that you inevitably don't have to turn around – the turning radius is horrendous.  Mahindra says it’s looking into a fix, but for the time being, it’s probably helping to make sure you don’t suddenly jerk the wheel and start rolling. So, basically, net positive. Now, we’re going to issue a caveat to everything we just said. The manual transmission, as things stand today, is necessary to enjoy the Roxor to its fullest. We drove both the manual and automatic transmission, and we highly recommend waiting to buy an automatic if you can’t make the manual work. Let us explain.

Mahindra’s automatic transmission is derived from that of the current Chevrolet Colorado’s six-speed automatic, but it’s been adapted to work in the Roxor. That means Mahindra has gone and stuck a transmission that’s meant to be in a mid-size truck into an off-road vehicle limited to 55 mph. Sounds like a neat idea, right? On paper, it seems fine, but the problem lies in the gearing and the tuning.

Unless you absolutely throttle and cane the thing from a stop, it just doesn’t want to go. Urging the Roxor to downshift with a full throttle application is like urging a tortoise to complete a marathon. If you do manage to get the Roxor’s revs up, pray that the road ahead is smooth. Rocking over dips and rough road cause the wheels to slip and spin, prompting a change to the next gear. When your mini event of deep, muddied ruts is past, you’re spinning 500 revs and feeling close to no forward motivation whatsoever. Then you’re faced with the issue of getting the Roxor to downshift again — it’s a vicious cycle. However! Mahindra says it has a fix.

Automatic Roxors with a 3.73 final-drive ratio are the problematic ones that we noticed the above issue in. Mahindra says that it’s going to release an updated automatic Roxor with a 5.38 final-drive ratio that “addresses a number of weaknesses in the 3.73-unit shift schedule.” We’re told “there will be improvements in both engine control and integration with the transmission.” Additionally, Mahindra “will be eliminating some compromises to maintain durability and improve overall performance.” As of now, Roxors with the 5.38 final-drive ratio are still in prototype form, so you can’t buy one yet. We highly recommend you wait to get one of these, assuming it fixes our complaints with the current automatic transmission. 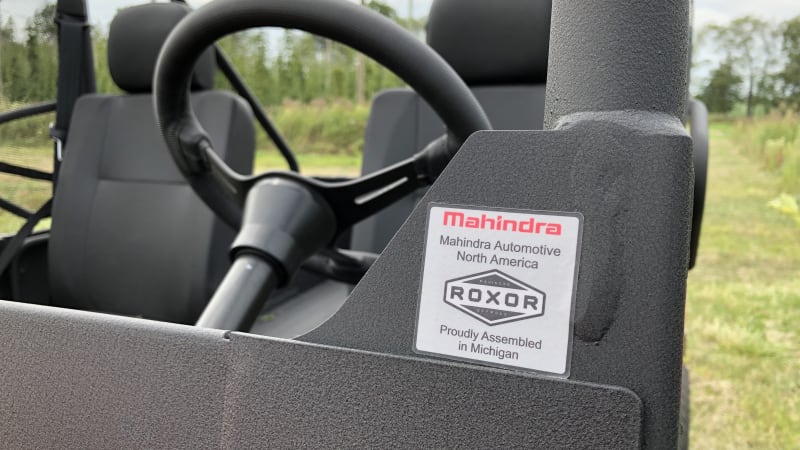 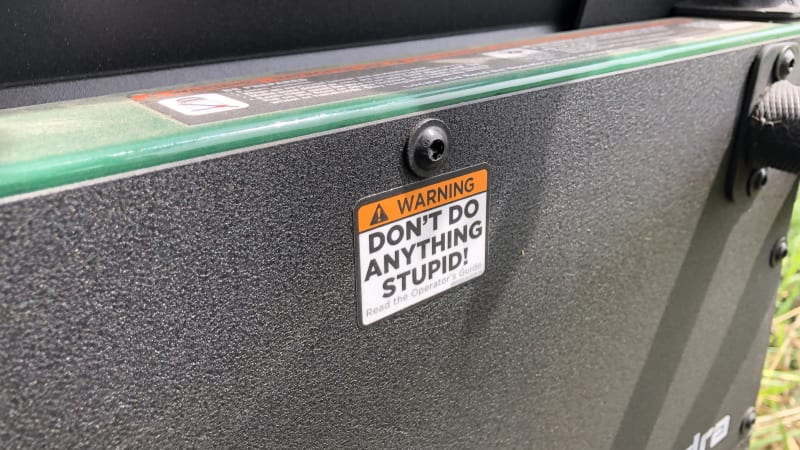 We appreciate Mahindra recognizing there is an issue with the Roxor A/T. That said, until we know it’s been fixed, everybody needs to be aiming straight for the manual. The diesel has enough torque that it’s almost impossible to stall. Each gearshift makes you feel like you’re driving something from a bygone era. Throws are long, but satisfying once the lever snicks into the wide gates. Power is made up to around 3,000 rpm before the diesel starts to feel like it’s reaching the end of its usable torque. Before you know it, the Roxor is up to 45 mph in a puff of black smoke, and it feels way faster than 45 mph did in whatever modern vehicle you used to tow the Roxor to your stomping grounds.

The hardest pill to swallow about the Roxor is its price. It starts at $15,999, then goes up from there. The automatic transmission is a $3,000 premium, bringing the price up to $18,999. For a vehicle you can’t legally drive on the road, that’s a tough hill to climb over. We started throwing on options in the configurator, and before we knew it, our Roxor was around $30,000. You can find or build yourself one hell of a Wrangler for that price, and you can drive it on the road. We think the best value proposition on a Roxor is buying one for as cheap as you can find. It’s a supremely desirable vehicle at that base price versus other UTVs, and will likely outlast anything else you buy new today. Not only that, but it’s going to be the easiest thing you’ve ever worked on if something does go awry. In this case, they do make them like they used to.