CARSON CITY, Nev. –– The Mahindra Roxor is ambling up a trail. Nothing too tough, just a little scramble. Over the top, there’s a mountain vista that’d make you suck in your breath sharply, if it wasn’t visible everywhere and in all directions. The Roxor picks along deliberately, its turbodiesel clattering as it sends up a steady stream of thin dust that’s blown away by a cool breeze coming off the peaks. Parked at the top, I kill the Roxor and it spins down with a bleat. Looking over its hood, there’s a timelessness to the scene, and to the Roxor. It could be 1972. This wind-blown scrubland could be anywhere.

It could even be the Indian highlands. The Roxor looks like an old Jeep, but it’s sold here as a UTV, barred from the street but perfectly at home ambling about in the wide-open West.  In a sense, it’s as timeless as the feeling I had contemplating the valley below. It’s a direct descendent of a Willys CJ-3B, licensed by Mahindra & Mahindra in the 1950s – one of a spate of licensing deals to companies all over the world. Over the years, the Mahindra Jeeps evolved more slowly than their American counterparts, but evolve they did. It’s not stuck in time, but time has flowed more slowly for the Mahindra’s licensed Jeeps.

The Roxor, assembled in Michigan from major assemblies shipped from India and some locally-supplied equipment, looking for all the world like a greatest hits album of CJ Jeep singles. But instead of the famous and unmistakable seven-slot Jeep grille, the Roxor sports a four-and-a-half slot unit with a square-slot mesh behind it. It’s not fooling anyone, least of whom is Jeep parent company FCA, which filed an intellectual property action against Mahindra last year. I won’t get into the legal wrangling, still ongoing, but my feeling is that the Roxor’s grille may change in the near future. 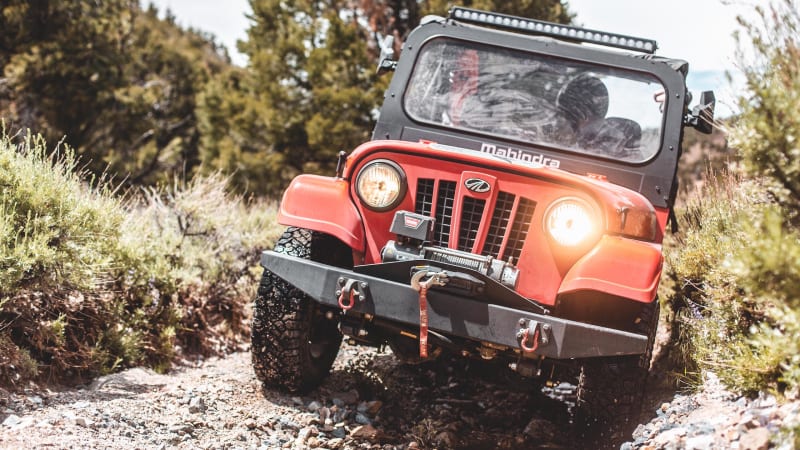 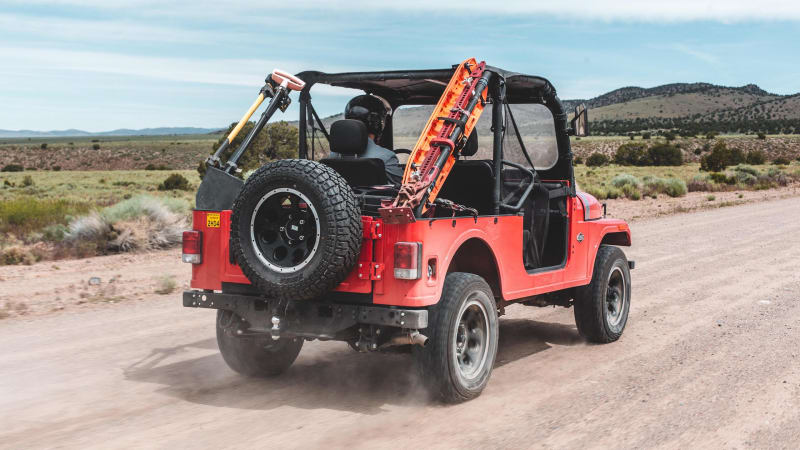 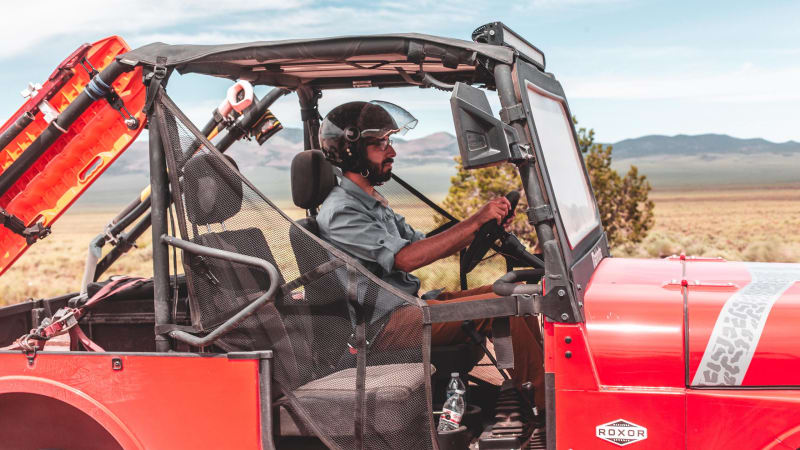 No big loss, because the current implementation is … awkward, at best. But thankfully, not much else has been diluted for UTV duty in the States – most important of which is the steel body, which starkly contrasts with its plasticky competition. There are big warning stickers all over warning of trouble, a roll bar for safety, and a seatbelt interlock that limits it to 2 mph if the driver is unbuckled.

Otherwise, it’s utilitarian to a beautiful fault. The flat dash has a single multi-function gauge, dominated by an analog speedometer. The interior of the tub is sprayed wall-to-wall with bedliner, each automotive-style shift is a long lob that ends in a positive engagement, the two-speed transfer case is controlled by a stubby knob with a balky action. All just as it should be, if you love cars and trucks.

If you love more mainstream UTVs, you might be disappointed. There’s not much plastic to be found, it doesn’t look like a testosterone-addled golf cart, and there’s no CVT. That said, it does now offer an automatic transmission, a six-speed unit with a traditional “PRNDL” pattern. It offers the promise of greater ease of use without the annoyances of a buzzy CVT. Unfortunately, at least in this early production unit – incidentally also fitted with a new rear two-place bench and revised roll cage – the shift mapping was, to put it nicely, a work in progress. 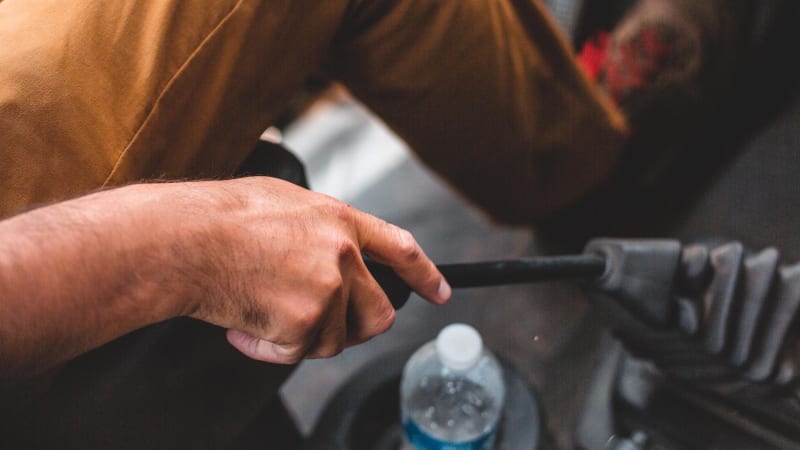 But I think there’s something a bit disingenuous to comparing it directly to the other UTVs out there. It’s more like Mahindra wanted to sell its existing product, and since it couldn’t be made road-legal it was wedged into the next closest category. Unlike the Honda Pioneer, a Polaris Ranger, or even Mahindra’s own* Retriever series, the Roxor wasn’t designed from the outset to sell in this class. That gives it some unique benefits and some unique disadvantages.

*The Retriever is sold by the division of Mahindra that also makes tractors, while the Roxor is a product of Mahindra’s automotive division. That explains the seeming internecine competition.

For one, it has a huge diesel engine for this class – a 2.5-liter turbodiesel inline-four, which sits longitudinally up front and channels power through either the aforementioned automotive-style automatic or a five-speed manual. The Roxor makes 62 horsepower, which isn’t much to write home about, but an impressive 144 pound-feet of torque. Its steel frame gives it a monumental (for a UTV) 3,490 lbs of towing capacity, and ruggedly traditional solid axles and leaf springs are anachronistic but surprisingly effective. 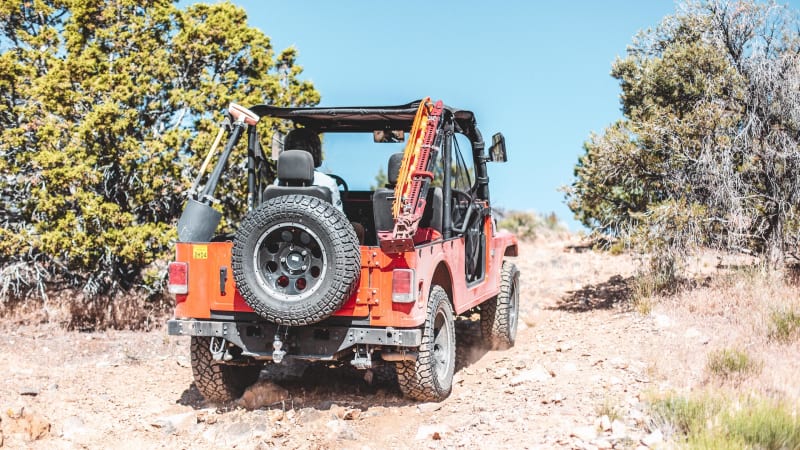 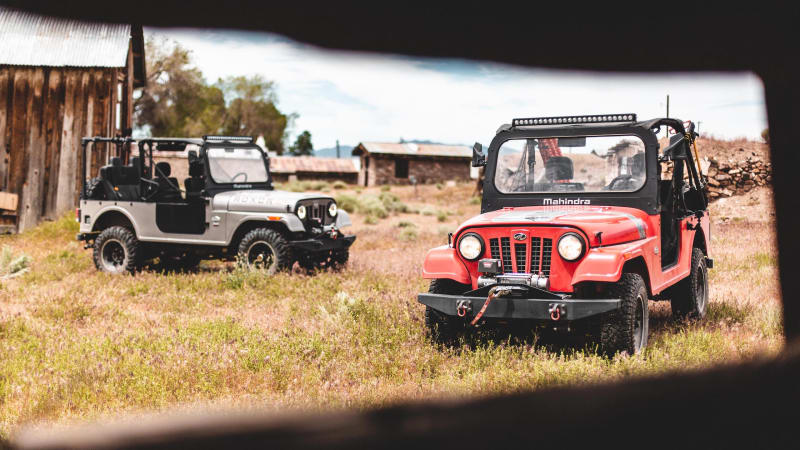 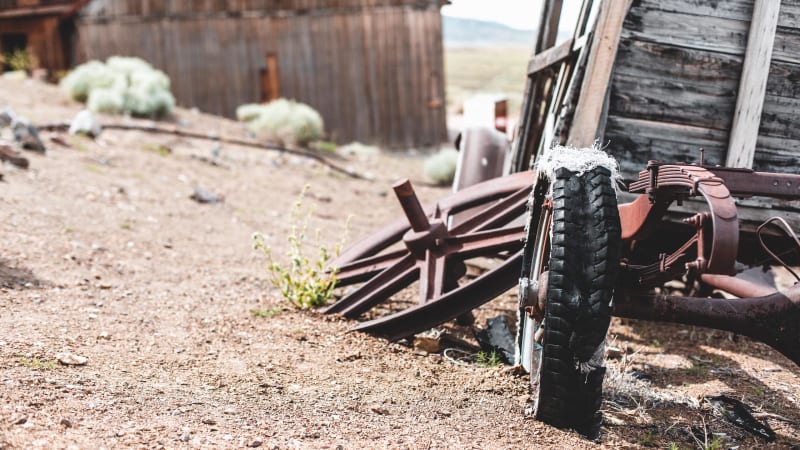 The time-tested configuration has some downsides. The Roxor’s turning radius is, in a word, atrocious. That’s mostly due to clearance issues at the front end, which can be fixed by the aftermarket with a lift and some wheel spacers. But the Roxor’s length and wheelbase – the latter is 16 inches longer than a Honda Pioneer 1000-5 – don’t do it any favors. Three-point turn? Multiply that by two and you can do it in a stock Roxor.

We also got bogged down a bit in the dunes. That’s partially our fault – a very tight timeline meant our sand adventure turned into a quick stop for some drone shots. We didn’t have time to air down and maximize traction. But some limitations of the Roxor shone through the imperfect setup. The automatic’s shift mapping was a work in progress, refusing to downshift until the Roxor ground to a near halt or stopped entirely. We believe Mahindra’s working on a software fix.

The sand also put the engine’s modest power in sharp display. The 2.5-liter unit has generous displacement and relatively modern tech, featuring common-rail direct injection. But it’s tuned to loaf along, not romp through sticky mud or ultra-dry sand. Part of that is the nature of the engine, designed (and tuned) for efficiency and reliability, not all-out power. The other part is that as a UTV, the Roxor features a speed limiter. It’s capable of more than it’s producing bone stock. Here, again, there’s a role for the aftermarket, but that’s all on you. 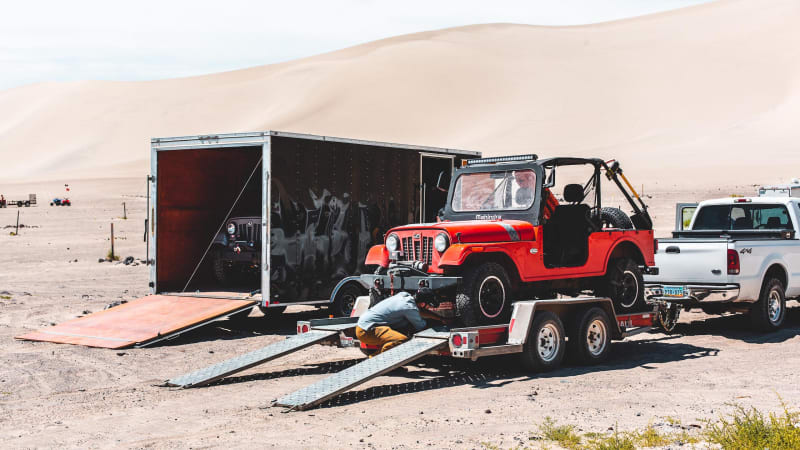 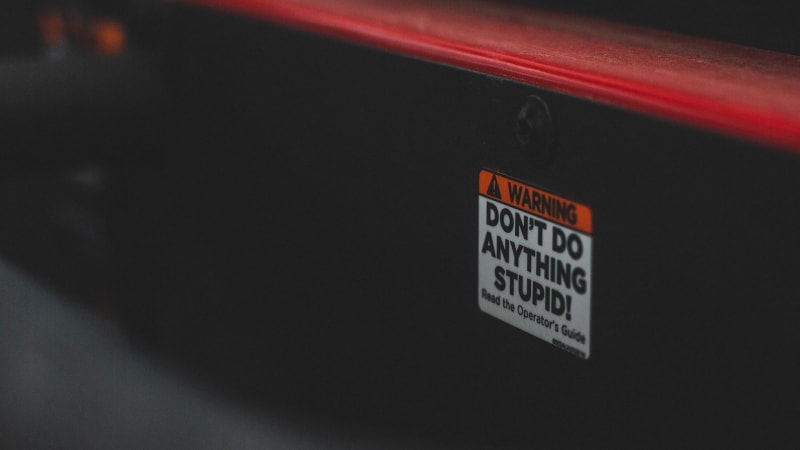 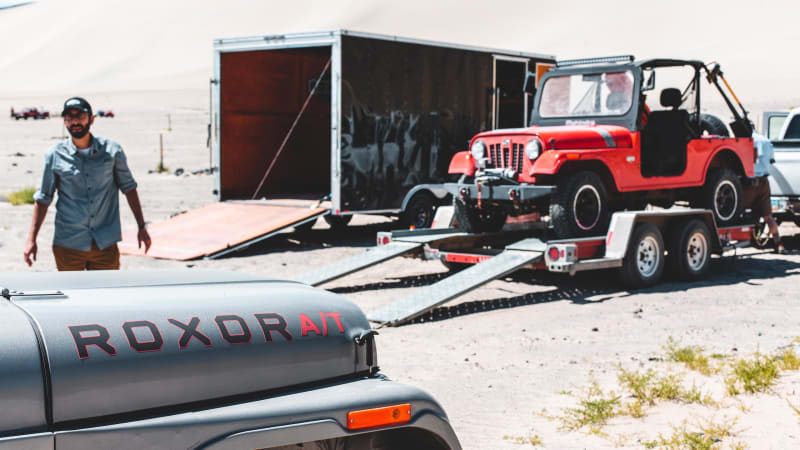 Limitations aside, where the Roxor truly surprises is its all-terrain comfort. Yes, solid axles and leaf springs are ancient tech, and the Roxor doesn’t even pretend to deliver the sort of long-travel thrills that high-performance UTVs like the Honda Talon or Polaris RZR deliver. The Roxor does have 9 inches of ground clearance, and the long wheelbase helps mitigate harder hits. But overall, it’ll amble down an unpaved access road at full roar without inducing a lick of nervousness. The steering is direct (if a bit slow), the brakes adequate, and the seats aren’t anything fancy but don’t induce soreness after a long day in the saddle.

And you can spend a very long day in the Roxor. Its other claim to fame is an incredible range, thanks to a 12-gallon tank and a claimed fuel economy in the low 30 mpg range. You do the math there.

The Roxor’s 2.46:1 low range (for a reasonable 36.7:1 crawl ratio), combined with its stump-pulling torque, means it’ll go slow and steady over rocky trails, too. The automatic worked better on the low-speed stuff, particularly if you were proactive with moving the auto shift lever between L and D as needed, but the manual wasn’t that much more work. The clutch was progressive and straightforward, with medium effort, and you’re not using it much in low range until you fall below a sleeping snail’s pace. 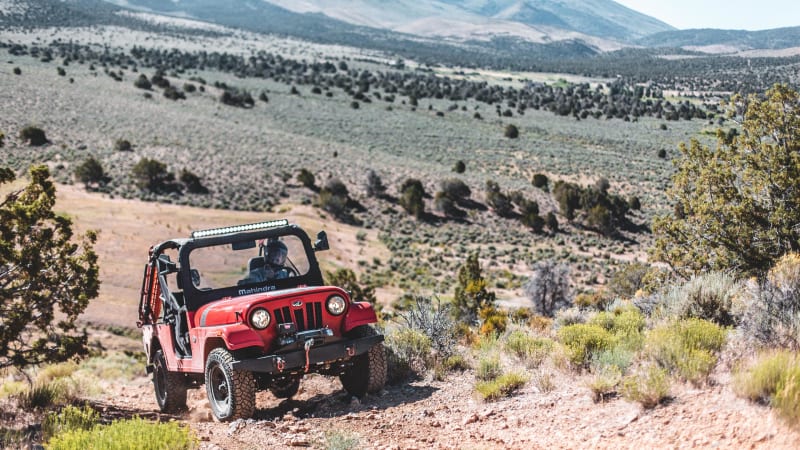 While the Roxor is certainly unusual for a UTV, its starting price of $15,999 (before $1,200 destination; the rear seat option is an additional $999) is only slightly higher than a Mahindra Retriever 750 two-seater and on par with a Honda Pioneer 1000. And while those are capable machines, no one would argue that they inspire much of an emotional reaction. The Roxor’s familiar shape, extra capabilities, and automotive vibe give it an advantage in the contest for hearts and minds of buyers. However, its heft and dimensions ­– it’s a full 1,258 lbs heavier and nearly 40 inches longer than a Pioneer 1000 – mean it’s a little less of serious tool for some types of tight-quarters jobs that more traditional UTVs excel at.

With its relaxed dynamics, exceptional range and towing capacity, healthy 350-lb rear cargo capacity, and Jeeplike demeanor, the Roxor’s best-suited for extended adventures, ambling through the wide-open spaces. Its classic styling sets the mood, too – not strictly nostalgia, to be clear, but just the urge to take things a bit less seriously and stay out a bit longer. To have a bit more fun. See what’s past that ridge over there. Hell, maybe we miss our flights back and camp out here for a week. Anyone got a tent?