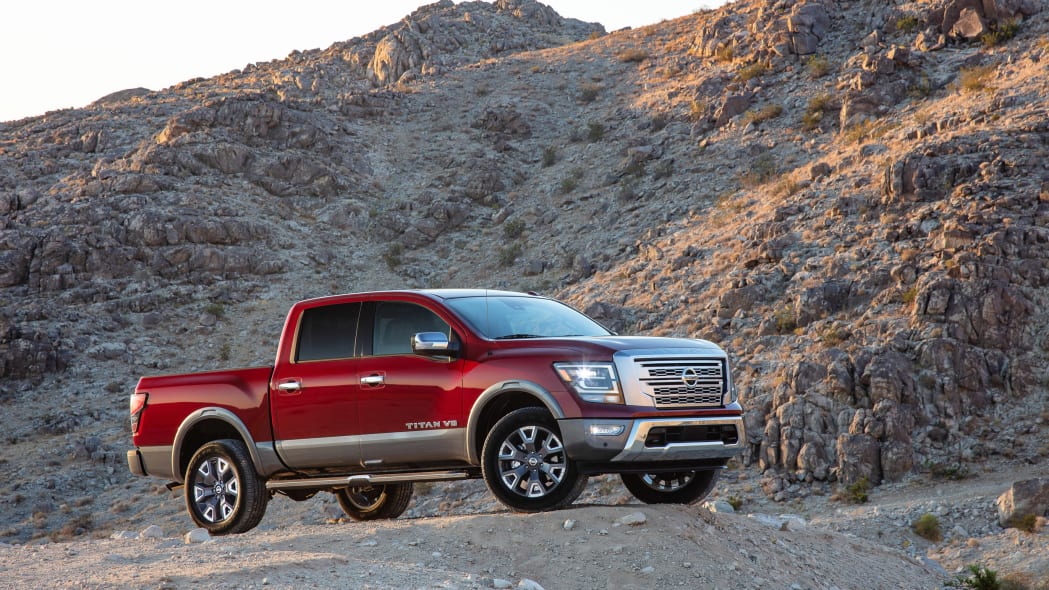 For the 2020 model year, the Nissan Titan has evolved while maintaining its core characteristics. The full-size pickup debuts a new "Powerful Warrior" exterior design and offers an upgraded V8 engine that now makes 400 horsepower. For the first time, the offroad-focused Pro-4X model features a "hot" red theme. Don't get too excited, though. This is only a mid-cycle refresh, and most of the truck is largely the same.

Regarding power, Nissan makes it easy on customers who have a tough time making decisions. While competitors such as Ford and Chevrolet offer varietal lineups that include smaller displacement engines with forced induction, the 2020 Titan is available with only one engine, a 5.6-liter V8. The hearty power source now makes 400 horsepower and 413 lb-ft of torque, up from 390 horsepower and 413 lb-ft of torque available on the 2019 model. That power goes to two or four wheels, depending on the variant.

As part of the reworked package, Nissan dropped the seven-speed transmission and introduced a new nine-speed, which should help provide smoother shifts. Nissan also says the new powertrain is nearly a full second quicker from 50 mph to 70 mph. There is no mention of how the new setup will affect fuel mileage.

Like 2019, the 2020 Titan lineup includes five trim levels: S, SV, Pro-4X, SL, and Platinum Reserve. The truck can be ordered as a King Cab or a Crew Cab, and a slightly redesigned exterior offers more differentiation between models. The grille, which has a new T-shaped outline that matches the Titan logo, can be ordered in three different looks. Fresh LED headlights and "double boomerang" daytime running lights, which are standard on SL, Platinum Reserve, and Pro-4X models, offer brighter (by 120% in low beam, to be specific), clearer, and wider lighting than the outgoing model.

The new face is part of what Nissan calls a "Powerful Warrior" theme that calls back to the Titan Warrior Concept. The tweaks also include a redesigned front bumper, new rear LED taillights, LED bed lighting, and tailgate "finishers" that include T-shape stamping (the Pro-4X has a black tailgate feature, while the Platinum Reserve's is Satin Chrome). The updated truck also debuts new wheels designs and new Red Alert, Baja Storm, and Cardinal Red Metallic paint colors.

The interior design tweaks are even less noticeable than the exterior changes, as a new Dual Panel Panoramic Moonroof is one of the biggest additions. Nearly all the shapes, buttons, dials, and knobs are identical, although Nissan did slightly change the dashboard's center air vent designs to accommodate bigger infotainment screens (bye-bye CD player). What was previously a 7-inch screen is now 8 inches standard, with the available option for a 9-inch WXGA touchscreen display. Paired with a 7-inch digital driver instrument display, they help make the Titan one of the most tech-savvy trucks on the road.

The Titan is Apple CarPlay and Android Auto compatible and has an available WiFi hotspot that allows up to six devices and 45 Mbps connection speed. A 12-speaker, nine-channel, 485-watt Fender audio system is still available, as is NissanConnect with over-the-air software updates.

As expected, offroad driving is a major focus for this truck and all trucks. The Titan has features such hill start assist, brake limited-slip differential, an electronic locking rear differential, and available hill descent control. It also has a new off-road gauge that uses accelerometer data and g-force rather than a gyroscope. It measures tire angle, pitch angles, and roll angles. The off-pavement pinnacle in the Titan range is the Pro-4X, which can be ordered with a "hot" trim package for the first time with badges, interior trim and stitching with red accents.

The 2020 Titan debuted under the fiery Dallas sun at the State Fair of Texas this week. Expect more news on pricing, specs, and additional models in the near future.