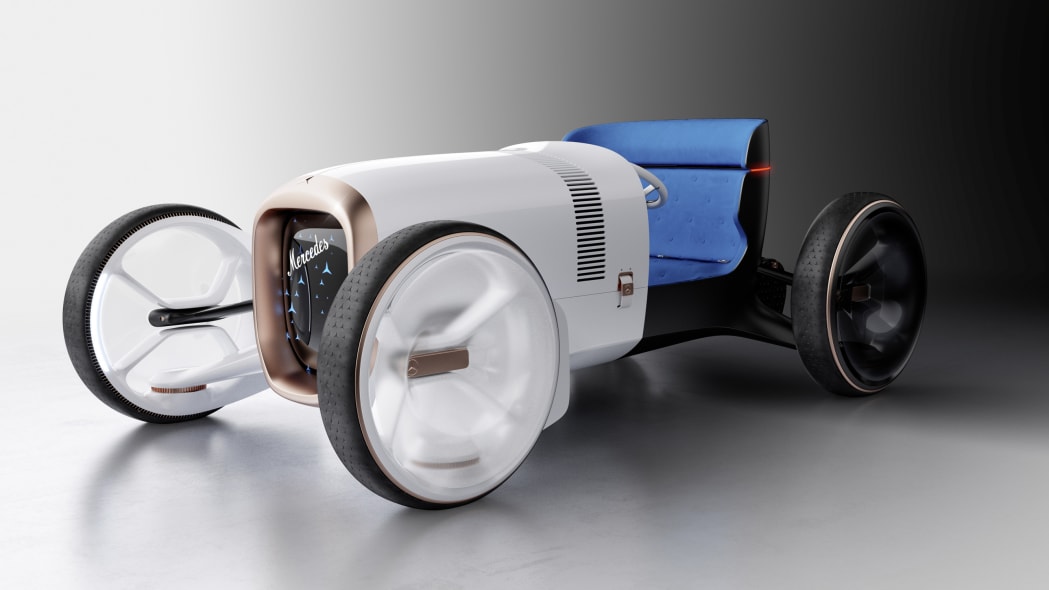 Mercedes-Benz claims the honor of inventing the first car in 1885, but that depends on how you define the word "car." Giving Mercedes credit for having created the first modern car is a far less ambiguous laurel wreath to bestow. That Mercedes 35 PS of 1901, a two-seat racer developed by Daimler-Motoren-Gesellschaft (DMG) at the instigation and constant haranguing of car distributor Emil Jellinek, became the the first car to wear the Mercedes name. That's because French company Panhard Lavassor owned the Daimler name in France, so Jellinek christened his Daimler-Mercedes, after his daughter's nickname, Mercedes. When the modern Mercedes-Benz recently moved its Lake Como design center to Nice, the automaker decided to celebrate the launch with the Vision Mercedes Simplex concept.

A bit more history on the inspiration first. Cars before the 35 PS were carriages with engines, almost all still built with wooden frames and having high centers of gravity from seats placed several feet in the air. When DMG engineer Wilhelm Bauer died at the wheel of one of those carriages, a Daimler Phoenix, in the Nice-La Turbie races of 1900, Jellinek called Daimler to request it build him 36 examples of a new car with a few innovations. He wanted something lighter, with a longer wheelbase, an engine placed lower in the chassis and a much lower center of gravity, and and electric Bosch ignition. DMG built the 35 PS on a steel chassis, and employed a new honecomb radiator design and placement worked out by Wilhelm Maybach. When Jellinek entered his new cars into the Nice-La Turbie races of 1901, the cars won almost all of them. Paul Meyan, president of the French Automobile Club, said, "We have entered the Mercedes era." The Simplex two- and four-seater models followed and were based on the 35 PS, given the Simplex name because they were easier to operate; the 35 PS had levers, pedals and controls to manage issues like two brake systems and ignition and spark timing. 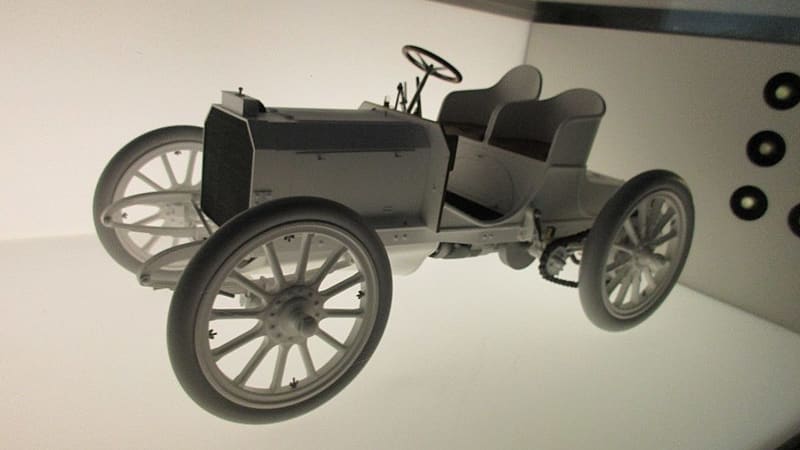 That's how we get to the Vision Mercedes Simplex, a concept that looks forward to the future of Mercedes design by looking back 118 years to the first example of modern ICE motoring. The Vision Mercedes Simplex "symbolizes the transition to a new era of design and technology," and although it isn't meant to be driven, it is an electric vehicle with four e-motors motors inside the large, fixed hubs of those outboard wheels — only the tires rotate. A rose gold frame mimicking the bronze radiator shrouds of yore fronts the monocoque body. Since the two-seater doesn't need a radiator, designers turned the center mass into a 3D display board for animations.

The two-tone white and black bodywork paint scheme channels the 35 PS and separates the exterior form from the interior since the concept goes without telltale dividers like windshield and doors. Subtle details around the concept include leather hood fasteners, a leather overnight bag hanging out back between the wheels, and filament taillights stretching across the back of the bench seat frame.

The azure blue bench seat with Chesterfield quilting calls out the cockpit, the color inspired by France's Côte d'Azur, where Nice is located. The wood and metal steering wheel rises up from the floor like a tiller. Mercedes calls the instrument panel theme "hyper analogue." The display limits the information shown to the driver to only what is needed at the time, and appears in and around rose-gold-rimmed gauge in the center. This is the 21st-century luxury take on Saab's Night Panel feature that blacked out the instrument cluster save for the speedometer.

Now that it's a going concern, the Mercedes design center will work up exterior, interior, color, user experience, and communication concepts from its base in Sophia Antipolis Science and Technology Park, called France's "Silicon Valley."