The sketches are only meant to gauge reaction for now 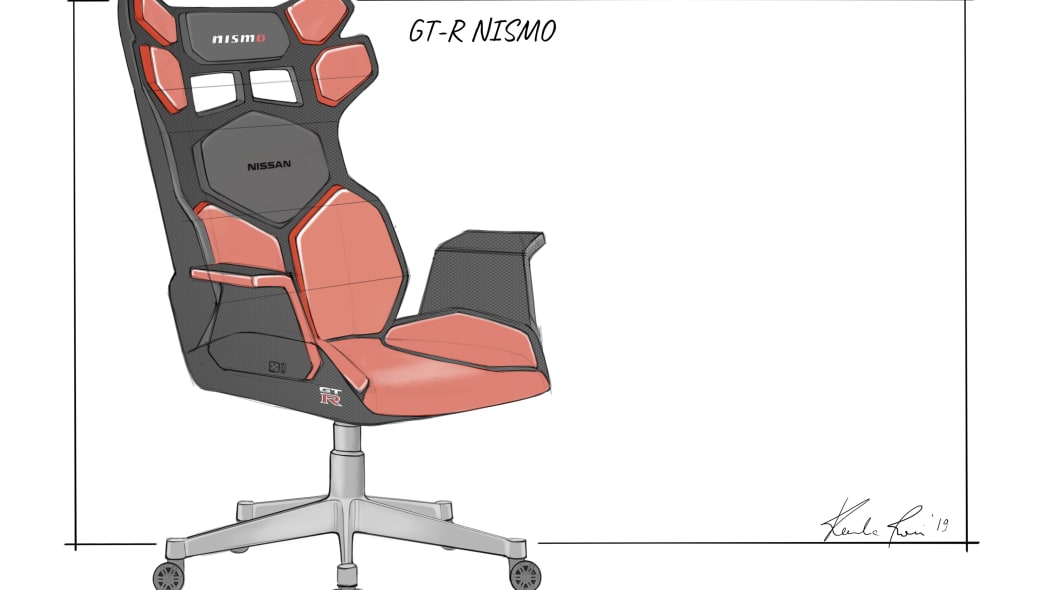 To celebrate National Video Games Day, Nissan designers sketched three themed thrones for eSports players. Each chair takes design cues and features from a Nissan product, either the Armada SUV, GT-R Nismo, or Leaf. The Armada-inspired chair delivers comfort — this is the one you'll find on the bridge of the Battlestar Galactica. Big, plush, and leather-stuffed, it's captain's quarters resting on a machine-finished aluminum stand. The Platinum Reserve black and brown leather contrasts with gunmetal surfacing, and hides climate-control machinery to warm and cool a gamer in the heat of battle. Extra lumbar support gives the back an easy time during long hours at the console.

The GT-R-inspired chair is, naturally, the leanest of the three, made for the Colonial Viper pilot. A brushed aluminum stand supports an angular carbon fiber that could have come from Evangelion. Polygons of red leather and synthetic suede pad the seat and portions of the back, and the headrest houses a built-in audio system. This one's for the gamer who feels the need for speed, and who doesn't mind feeling the effects of hours in the saddle.

The Leaf chair goes for comfort and technology. The only concept chair to get an integrated calf rest, light gray leather combines with accents in vibrant blue and gunmetal. A USB charge port powers ancillaries; Nissan didn't say how often the chair itself would need to be recharged.

The automaker doesn't have plans to build the chairs at the moment — this is an experiment to gauge fan reaction. Those in favor can vote for their favorite on Nissan's Twitter account; the GT-R chair is way ahead, which won't surprise anyone, and the Leaf is just edging out the Armada. Cast your vote and who knows, perhaps for next year's Video Games Day these won't be merely concepts.