Hand grenades are no match

Inkas Armored Vehicle Manufacturing has unveiled what it is billing as the first commercially available armored Bentley Bentayga, a week after we saw the armored X5 Protection VR6 straight from BMW. It can be equipped with up to level B6 protection, so it can withstand shots from a 7.62 mm round fired from an assault rifle. The first example has already been purchased for approximately $500,000.

Inkas, which is based in Toronto, lists armoring services for a number of different vehicles including the Toyota Camry, Mercedes-Benz G-Class, or even Ford Transit vans. And now, it offers a service for Bentley's luxurious and performance-minded Bentayga SUV.

Inkas offers two routes for its customers. An interested consumer can bring a car in and have it outfitted exactly the way he or she wants. Or, the customer can tell Inkas what he or she is looking for, and Inkas will source and build the entire project, including finding the right vehicle. For the Bentayga, specifically, armor options start at $130,000, and fully sourced projects can range into the hundreds of thousands of dollars, as previously noted.

Standard armor for each project includes a safety shell for passengers, multi-layer bullet-resistant glass, battery and ECU protection, reinforced door hinges, a reinforced suspension, and run-flat tires. Inkas says the B6 level of armor is meant to stop armor piercing rounds, but it could also protect from grenade blasts.

Inkas also offers the options to equip the Bentayga with a lightweight armor package, a PA system, heavy duty brakes, emergency lights, a fire supression system, and heavy duty wheels. We imagine most orders tick all the boxes. 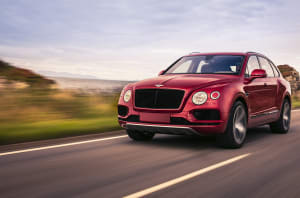