Hyundai and the Insurance Institute for Highway Safety (IIHS) have good news: The 2019 Hyundai Nexo did not explode in crash testing. That's a big deal, considering it's the first production hydrogen fuel cell vehicle to be tested by the IIHS. Even better, it earned top marks and was awarded the Top Safety Pick+.

While we certainly didn't expect it to explode, the public still can't seem to shake images of the Hindenburg bursting into flames whenever someone mentions the prospects of driving a car powered by hydrogen. Nevermind they're nearly all driving around with several gallons of gasoline. Acing a full regimen of IIHS crash tests could help change that perception.

Like fellow fuel cell vehicles the Toyota Mirai and Honda Clarity, the Hyundai Nexo is offered in extremely limited quantities exclusively in California. The IIHS normally wouldn't test such a low-volume vehicle, but Hyundai nominated the car for testing, and the IIHS saw it as a good opportunity to test a fuel cell vehicle for the first time.

Including the Nexo, Hyundai now has 12 Top Safety Pick or Top Safety Pick+ vehicles sold in the U.S. market. See more videos and read the full report on the IIHS' website. 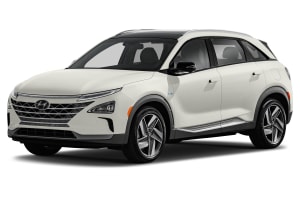