Real headlights give it an entirely different look

Tony Markovich
The Gumball 3000 is to cars what the Met Gala is to fashion. Whereas Gala guests are flexing their money with outrageous outfits and costly designer customs, Gumball participants show off with expensive and rare vehicles covered in eye-popping temporary skins. One of the biggest stars at the 2019 Gumball 3000 will be the only road-legal Aston Martin Vulcan in the world.

This year, the Gumball 3000's path takes drivers from Mykonos, Greece, to Athens, Greece, to Thessaloniki, Greece, to Tirana, Albania, to Porto Montenegro, Montenegro, to Split, Croatia, to Venice, Italy, to Monaco, to Barcelona, Spain, to Ibiza Town, Spain. Approximately 114 teams will be participating in the ostentatious party rally, and few will have a car more special than the Vulcan.

YouTube personality Mr. JWW will be behind the wheel of the Team 106 car, which is wearing a slick camo look that is inspired by the Avro Vulcan bomber used by the Royal Air Force (and featured in the James Bond movie Thunderball as another point of reference). JWW will also be joined by G. Stepanovs and S. Tompkins. 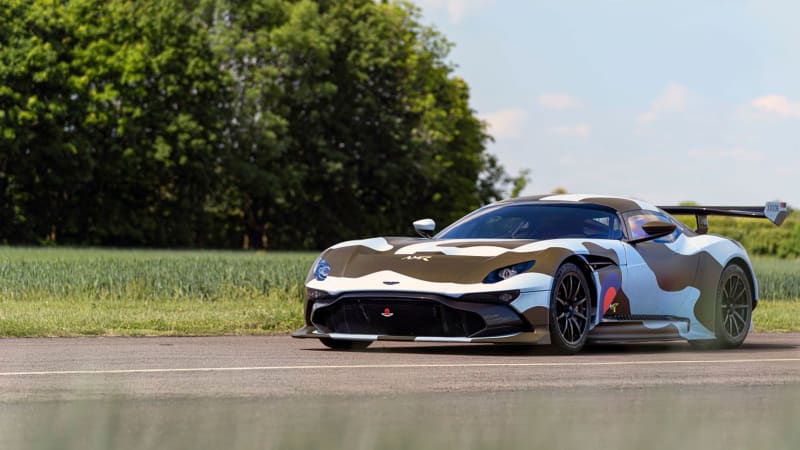 Of the 24 Vulcans made, the one you see here is the only road-legal version of the bunch. In the video above, JWW shows exactly what makes it capable of driving on public roads. The mods include Michelin Pilot Sport Cup 2 tires, an increased ride height, a different front splitter, a revised radiator, removed steering lock stops, revised steering rack, and an altered rear wing. The biggest adjustment is the addition of proper headlights, which give the Vulcan an entirely new front-end style. Aston Martin changed a few minor things inside, as well.

Check out all of the features in the full video above, and watch the JWW and Gumball 3000 social channels this weekend and next week for ongoing rally coverage.