Make noise about it for Mazda to hear, but don't call it a 'Mazdaspeed' Mazda boss Akira Marumoto said last year there'd be no Mazdaspeed version of the new Mazda3 because the hot hatch segment wasn't a priority for the carmaker. Then Mazda engineer Dave Coleman told Road & Track that without "an engine on the shelf that would fit properly," an MPS variant made no sense. The first reader comment on our Coleman post read, "Engine — you have it; cue up the 2.5T." Mazda might have been listening. Program manager Kota Beppu told Autocar he'd like a "hyper" Mazda3, the outlet figuring the 2.5-liter four-cylinder turbo would make the most sense for power.

Autocar wrote "the project had not been officially signed off, [but] insiders suggest that is a formality." When Car and Driver queried Mazda and its sources about the report, the magazine realized "the company is seriously considering a high-performance hot hatch." What's more, "Drew Cary, senior manager for brand communications, said, 'We encourage people to ask for it, though. Our planners and executives are watching and listening to fans.'"

The turbocharged 2.5-liter SkyActiv-G four-cylinder — which doesn't sell in Europe — makes 250 hp on premium gasoline and 310 pound-feet of torque in the Mazda6, CX-5 and CX-9. A next-generation SkyActiv-G is predicted on the way next year, bringing more boost and power. Even as is, we're talking a chunky lump of power to send to the front wheels, and Beppu mentioned torque steer. The new Mazda3's all-wheel drive would alleviate that bugbear.

Unlike the raw, fast-twitch reflexes of the last Mazdaspeed3 from 2013, Beppu says a new model "needs to be responsible and friendly ... more friendly than a Golf GTI." And, "It should be fast." The polished looks and interior address the necessary perceptions. CD's done the math on the current 2.5-liter and predicts a five-second sprint to 60 miles per hour, which is Volkswagen Golf R and Honda Civic Type R territory, so GTI comparisons could be a case of aiming low. Imagine a 300-hp engine with a touch more torque and a six-speed manual ...

If Mazda follows through with such a product, it could take two years to get the green light. However, we're told that Mazda's Los Angeles research and development center has already built a proof-of-concept to encourage and anticipate that green light. 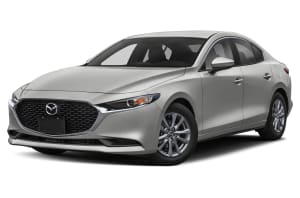