Cars from the 1980s weren't exactly known for performance. The muscle car days had ended a decade prior, and computer controls and precision engineering standards were still in their infancy. But that doesn't mean the decade was a complete loss for automotive enthusiasts. For proof, take a look at this 1985 Dodge Omni GLH that's currently for sale on eBay.

Carroll Shelby's affiliation with Ford was in hiatus (and under litigation in court), but the legendary tuner wasn't content to sit around and do nothing. Shelby turned to Dodge right around the time that the American company was dipping its toes into turbocharging. The partnership led to several interesting vehicles, but perhaps none of them were as unexpected as the Shelby-modified Omni hatchback.

The '85 GLH you see above is powered by a turbocharged 2.2-liter four-cylinder engine that sends 146 horsepower to the front wheels through a five-speed manual transmission. These days, that might not sound like a lot of power. But when you consider that the base LG4-code 305-cubic-inch V8 in the Chevy Camaro Z28 spun out 155 hp that same year, you start to understand why the Shelby Omni was a big deal. 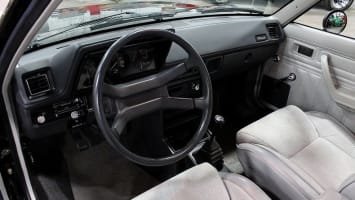 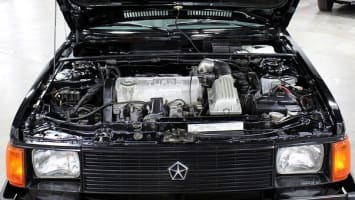 Suspension changes to the Omni GLH included stiffer springs, firmer shocks, and a lowered ride height that dropped the bodywork closer to its 15-inch aluminum wheels. GLH badging — which, in true Shelby fashion stood for "Goes Like Hell" — and blacked-out bodywork rounded out the updates.

Dodge sold 6,513 Omni GLH models in 1985, and just 3,509 were equipped with the turbocharged engine. You'll have to look long and hard to find one that's nicer than this on eBay. The seller claims it's mostly in original condition, and its low odometer reading of 15,901 miles seems to back that up. It's located in Wixom, Michigan, with an asking price of $18,900.