Vilner Datsun 280Z has been restomodded to blue and copper perfection

Every single piece of the car was taken apart Before Vilner plucked this 1976 Datsun 280Z for its new pet project, the classic car sat in a good home. Literally. It was stored in the previous owner's living room, and Vilner had to remove part of a window assembly to get it out. The effort was worth the results, as the Bulgarian garage stripped it down to the bones and built it back up with better equipment, an all-new leather interior, and an eye-catching blue and copper exterior.

Originally shipped from the United States to Germany with a Gold Metallic paint job, Vilner took ownership of the Datsun a few years ago. It may not be a 240Z, which has exploded in popularity and value in recent years, but with the help of The R-M Code, this Fairlady Z is now its own kind of specialty collector item. Every piece, bolt, tube, and trim of the car was taken apart. Vilner either refurbished, refreshed, or replaced each part to OEM spec or better. The car is a restomod, so it's not completely factory spec, but Atanas Vilner says he tried to keep close to original, with some imaginative flair added. His goal was "a silhouette as clean as possible."

The customizers developed a color called "Vilner Copper Rose" specifically for this car and applied it to the Superlite-style wheels, the grille, the rear light surround, and on small interior details such as the steering wheel and the gearshift surround. The rest of the exterior drips in Cobalt Matte Metallic.

A simple adjustment that cleans up the entire look of the vehicle is the removal of the clunky front and rear bumpers. Vilner also gave the car full LED lighting, LED Z badges for side indicators, machined side mirrors, and lowered the car 0.79 of an inch using Eibach springs. The custom polished stainless steel exhaust also includes side silencers in front of the rear wheels. And that's just the outside. 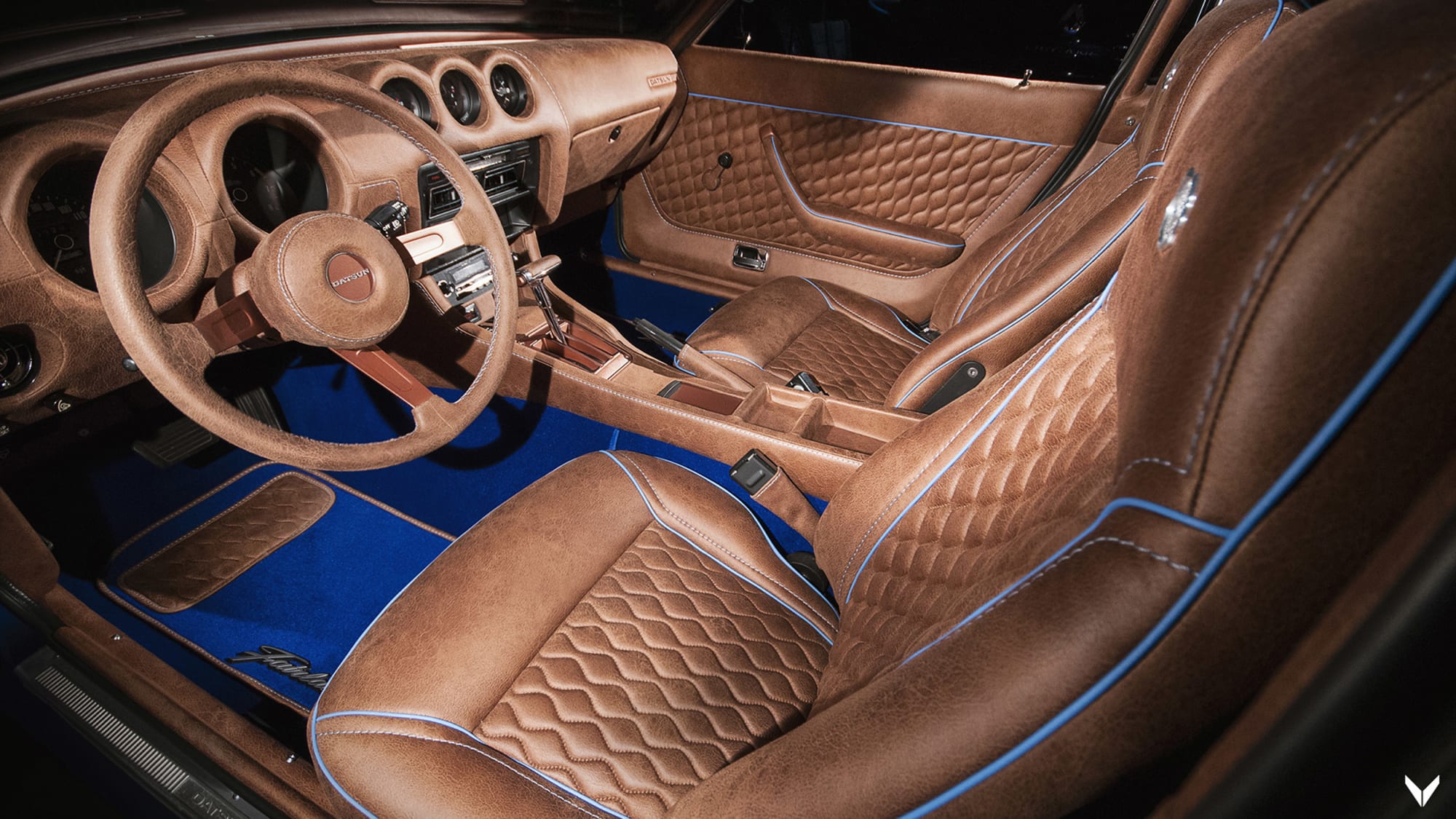 Inside is where this 280Z will take people into unexpected and unknown territory for a Datsun. The cabin has been completely redone with textured vintage leather, including on the entire dash, the doors, the steering wheel, and the center tunnel. The seats also have matching leather but feature blue contrast piping. The blue not only matches the exterior but also the floor, which has been done up with blue felt. The headliner also features a panel of wavy blue quilting, a design that was also applied to the door panels and seats.

The engine remains the same 170-horsepower inline-six that is mated with a three-speed automatic. After years of work, Vilner is wasting no time keeping the car. It is already listed for sale for approximately $85,000. Check out the details in the extensive gallery above or see the car in motion in the video below.