BEIJING — Ford Motor Co. has revamped its Asian operations and made its China business a stand-alone unit, recruiting the head of local automaker Chery Automobile to be its new CEO.

The company said Wednesday that industry veteran Chen Anning will replace Jason Luo, who quit earlier this year, just months after taking over at Ford in China.

The company has been reorganizing after losing momentum as the Chinese market slows. It said the restructuring was aimed at accelerating its return to profitable growth.

"Success in China is critical as we reposition our global business for long-term success," said Ford President and CEO Jim Hackett. "With today's actions, we are strengthening our commitment to the China market and reorganizing our international markets to strengthen their performance."

By having a separate China business, the company intends to move more quickly and strengthen local leadership within the company.

U.S.-educated Chen spent the first 17 years of his 25-year career at Ford.

The company is in the midst of renewing its product lineup in China, announcing its new Territory crossover just last week, and it and has announced plans to increase local production for both Ford and Lincoln models. It has a joint venture with Zotye on small electric vehicles and has set alliances with online giants Baidu and Alibaba. 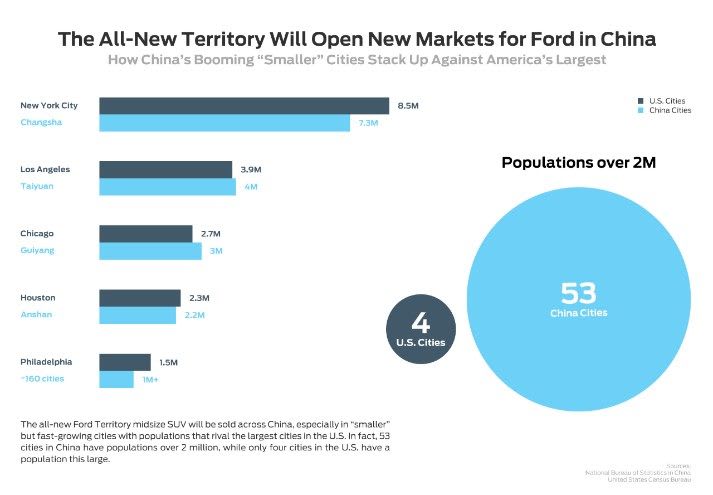 China's auto sales shrank 12 percent in September from a year earlier, the third straight month of declines as demand weakens as the economy cools.

Total sales growth in the first nine months of this year was just 0.6 percent compared with the same period of 2017.

Weak demand is a setback for global automakers like Ford that are looking to China to drive revenue and are spending heavily to develop models for local tastes.