No more split headlights for the RC After the updated Lexus RC coupe was spied testing last month, Lexus has released official images of the RC coupe's upcoming refresh. The facelifted car will debut at the Paris Motor Show in early October, but the automaker is already offering a good look at the RC's improvements.

The 2014-introduced RC is getting a subtle set of updates, and Lexus says these changes will sharpen it both as a driver's car and as a grand tourer. As well as improving aerodynamics, Lexus has honed the RC's suspension and powertrain: There are new shocks and stiffer bushings along with a new set of 19-inch wheels; the car's footprint has been altered and its center of gravity lowered. The rear-wheel-drive RC300's 2.0-liter turbo engine has also had its throttle response fine-tuned. As for aero, there are changes in the side window moldings and a new rear bumper duct to aid airflow and to make the RC more stable on the road. Lexus now calls the RC both razor-sharp and extremely supple; eventual test drives will confirm how much the handling has improved. There's no mention of changed power figures.

The RC's looks remain largely unchanged, with noticeable alterations mainly to the headlights and bumper corners along with the spindle grille's mesh; the headlights are now one-piece compared to the old split design that featured a lower "Nike Swoosh" separate from the main headlights. There are new colors, including Naples Yellow and Sparkling Meteor, and the interior colors and trim have also been refreshed: Black leather seats are now available with eye-catching Mustard Yellow side bolsters. A new analogue clock has been borrowed from the LC, as well as other interior styling improvements influenced by the bigger coupe sibling. All in all, it seems the RC is getting subtly infused with the LC's appearance. 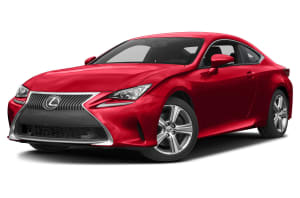