Tesloop uses the cars for a shuttle service in Southern California

Reese Counts
Since 2015, Tesloop has been offering a shuttle service along select routes in Southern California and Nevada. The company's first car, a Tesla Model S 90D, was dubbed eHawk. Since it was put into service, eHawk has driven more than 400,000 miles, making it the Model S with the highest recorded mileage in the world. According to Tesloop, the car drives about 17,000 miles a month. Since we all love numbers, the company has kindly supplied a ton of data, including this Google spreadsheet with the cost and mileage of all maintenance and repairs.

There have been three major services since the car was put into service. The first — the replacement of the front drive unit — occurred at just 36,404 miles. Other early services include calibrating the sunroof, replacing the driver door handle assembly and several tire replacements and wheel alignments. 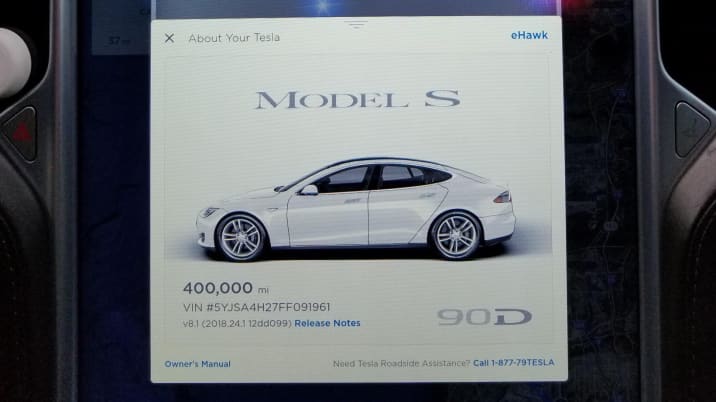 The eHawk has also had two battery replacements, one in August 2016 at 194,237 miles and the second in January 2018 at 324,044 miles. According to Tesloop, battery degradation over the first 194,000 miles was about 6 percent, while degradation for the second battery was roughly 22 percent. This is to be expected, as the car is using Tesla's supercharger network multiple times a day, charging to 95-100 percent instead of the recommended 90-95 percent.

That's not the entire story with the batteries. The first battery replacement could have been postponed had a firmware updated arrived earlier. Apparently the eHawk was having an issue where the range estimator would decrease by 10 miles even without a loss of charge. Tesla said it was an issue with the way the software calculated the battery's charge. Tesla made some recommendations — not supercharging regularly, not charging to 100 percent regularly and giving a bit of rest time between low charge and supercharging.

The second battery was replaced when the car was brought in for an issue unrelated to the battery. Both batteries and the front drive unit were all replaced free of charge.

All of Tesloop's cars are under an eight-year warranty. The company estimates it can drive the eHawk another 600,000 miles before the warranty ends.