Can the new hybrid right the wrongs of the second-gen Insight?

John Beltz Snyder
MINNEAPOLIS, Minn. — The first Honda Insight generated a lot of love, if you listen to its fawning owners. We believe them, and drool a little when a pristine example cruises down the highway. There's something about the optimism about the future it embodied at a turning point in automotive history — and those wheel skirts — that just tickles certain dopamine receptors.

That's why the second-generation Insight was such a letdown. It chased the Prius' customers, trading funkiness for a little extra room, but completely losing its edge along with any semblance of personality or drivability. While Honda was making entertaining cars, including the plucky little CR-Z (which combined a hybrid powertrain with sporty overtones and the option of a fantastic manual transmission — your author loved it, if no one else did), the Insight seemed to share the least amount of brand DNA. We didn't miss the second Insight when it left, but we sure hated what it'd done to the nameplate.

But now, things are different. The Clarity proves Honda is both dedicated to doing green cars the right way, and capable of excellent interiors. The Accord and Civic are fun to drive, and the new styling language translates well across the lineup; Honda found a look that works, and we're pleased to see it proliferate. With the revamped Insight coming out right now, in the midst of a full-blown Honda revival, we had high hopes for this all-new version, which goes on sale on June 29. We were optimistic about the Insight when we arrived in Minneapolis to drive it. We knew it wasn't going to be as far out as the original Insight, but we hoped — expected, even — that it would be the sort of nameplate revival that would do right by the first generation. Heck, maybe it'd even help us wallpaper over the emotional stains of the second Insight. 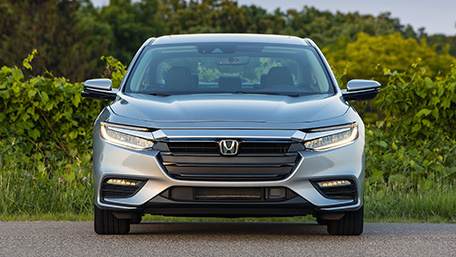 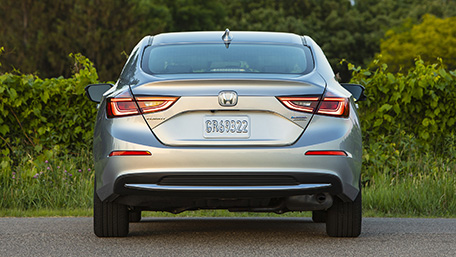 You probably noticed that the Civic Hybrid is no longer. While this Insight essentially replaces it in the lineup – even borrowing the Civic platform – Honda made sure to differentiate it from the sporty youthfulness of the Civic. The face is certainly familiar, but the rest of the car looks bigger, more conservative and more mature. Honda could have taken a funkier approach, but we appreciate the restraint. The Insight looks more approachable, standing out without adopting wild and wacky styling. (We're looking at you, Toyota Prius.)

The interior of the Insight Touring is one of the better Honda cabins we've seen of late, although the Clarity is on another level. The seating was quite comfortable, more on the cushy side than sporty (or course), but still supportive. The bits of grained, black plastic blend in well with the stitched leather of the seats, dash and door trim. The infotainment system is the same slick, configurable interface we came to enjoy when we drove the Honda Odyssey a year ago. It responds quickly to inputs, is crisp and clear, and is organized well. We found it easy to switch through menus and find all the right information and entertainment we wanted.

The digital display behind the steering wheel looks clean, and puts important information right in front of the driver. We enjoyed being able to choose what to display — navigation, trip data, energy flow — on the left half of the instrument panel. The instrument cluster, steering wheel controls and center stack and console might look busy in photographs, but it feels natural when you're sitting in the driver's seat. We're even finally getting used to Honda's gear selector button layout in place of a traditional lever. Meanwhile, the front passenger enjoys a clean, uncluttered view in front of them. 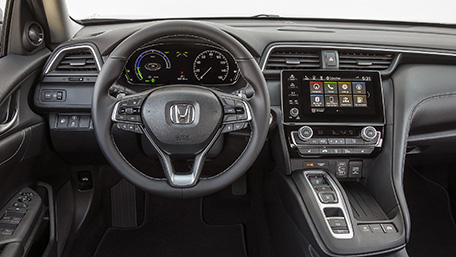 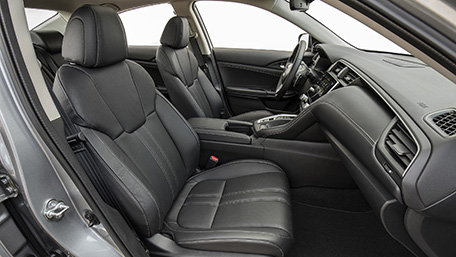 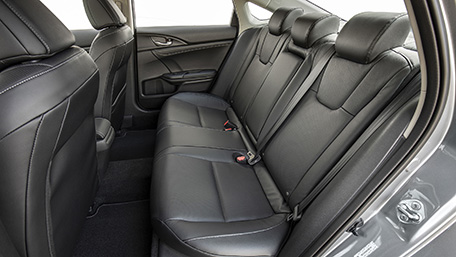 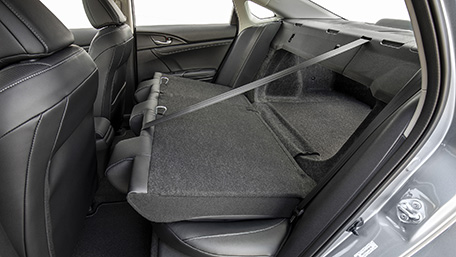 Honda is able to maximize cargo space by placing the battery underneath the second row of seating. LX and EX trim levels offer 15.1 cubic feet, while the Insight Touring provides 14.7 cubes. The rear seats fold flat for more space. What really impresses in person is the massive trunk opening spanning almost the entire width and height of the car's rear, which translates to easy loading and unloading.

The Insight powertrain consists of a gasoline engine, lithium-ion battery, and two electric motors. The 1.5-liter Atkinson engine provides 107 horsepower and 99 pound-feet of torque. One of the electric motors drives the wheels, providing 129 horsepower and 197 lb-ft of torque, while the other directs current either to the drive motor or battery pack, but not directly to the wheels. Total system horsepower is 151.5, while peak torque is the 197 lb-ft offered down low by the e-motor

Most of the time, the Insight operates like a series hybrid with the battery or gas engine powering the electric motor that, in turn, drives the wheels. In almost every driving scenario, the gasoline engine acts simply as a generator. At higher speeds, though, there comes a point when it's more efficient for the engine to bypass the electric motor/generator system to power the wheels directly. There's no transmission through which to direct power, so a clutch linkup lets the gas engine drive the wheels within a certain range of vehicle speeds, with the electric motor providing support, unlike other hybrids (Prius, for example) in which either/both of the electric motor and gas engine power the wheels directly through a transmission. If it sounds complicated, don't worry about it. We didn't notice a different feel, regardless of speed. 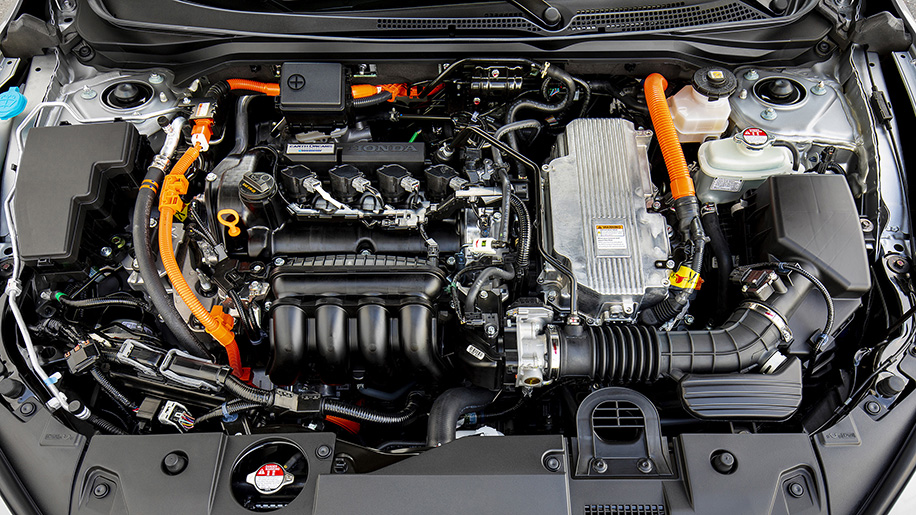 The result is that the Insight walks the walk when it comes to efficiency. The top-of-line Touring trim level is rated at 51 city/45 highway/48 combined. The lower trims, LX and EX are even better, at 55/49/52 mpg. It's not quite as economical as the Toyota Prius Eco or Hyundai Ioniq Hybrid, but you get a better interior and significantly more power for that small sacrifice in efficiency.

The Insight has adequate oomph, but the gas engine drones at high revs under moderate acceleration. This is what we expect from a hybrid, but somehow we noticed it more here. Whether that's because Honda hasn't done as much to sonically isolate the gas engine, or a reflection of our expectations from a car that otherwise seemed refined, is fodder for future comparison. That droning, and road noise from the tires, are slight annoyances in an otherwise quiet car.

The strength of the Insight's regenerative braking effect can be adjusted via the paddles on the back of the steering wheel. We were frustrated that it wouldn't lock in the regen level, though, defaulting back to zero once you get back on the throttle. Honda did the same thing with the Clarity, and we puzzled over that choice then, too. When we asked about it, the folks at Honda explained that they wanted the car to feel familiar to someone who wasn't used to the feeling of strong, continuous regen. It's the electrified equivalent of when you manually downshift on a downhill grade in a conventionally powered vehicle, but the car resumes normal shifting duties once you begin accelerating again. They reminded us, too, that the car will hold regen levels while in Sport mode. Still, we'd like to be able to use it in the more efficient modes, and think today's car buyers would be smart enough to figure it out. 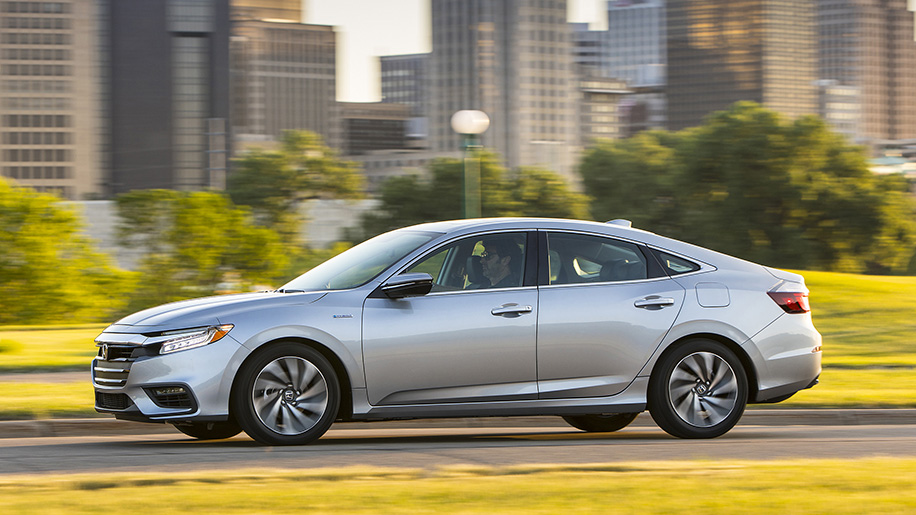 In addition to the default Normal driving mode, there are three other drive modes, selectable by button. Econ mode maximizes fuel efficiency, dulling throttle response. Sport mode, does the opposite, responding more sharply to accelerator input. There's also an EV mode, which relies on the battery to allow all-electric driving for a short period of time.

The feel from all the driver controls is impressive. Steering is very light, and very anesthetized, which seems to be a go-to trick to make inexpensive cars feel like something from the lazy luxury set. It's responsive, though, and it's easy to whip the wheel around in tight urban maneuvers. The accelerator feels natural in all modes, and has a palpable click point about three-quarters of the way to the floor that encourages you not to be too heavy-footed. The brake feel is perfectly progressive, building up resistance gradually as you dig in — no weird regen behavior there.

The Insight, from the base model up, includes the Honda Sensing system: forward collision warning and braking, lane departure warning, and road departure mitigation. All trims also have adaptive cruise control, lane-keep assist, auto high beams, driver attention monitor and a traffic sign recognition system. EX and Touring include LaneWatch, which can display a camera feed of the passenger-side blind spot on the central touchscreen. That's helpful in lane changes and right turns across bike lanes, but also when parallel parking. 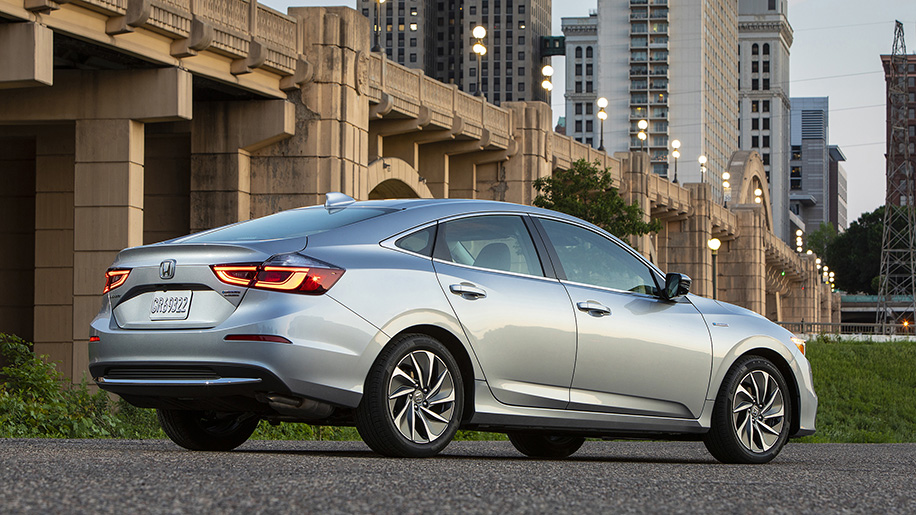 It's also a respectable deal at its price point, starting at $23,725 for the entry LX model, including destination fees. The EX goes for $24,995, and adds features like remote start, LaneWatch, 8-inch touchscreem Apple CarPlay and Android Auto, LED fog lights and walk-away automatic locking. The line-topping Touring trim starts at $28,985, and checks all the boxes, including a power moonroof. For that, you give up an increment of fuel economy compared to the competition, but gain good looks, an interior fit for a grown-up, and a respectable amount of power.

The 2019 Insight is a vast improvement of the last car to bear the nameplate. While it didn't quite capture our imagination like the first Insight, it didn't disappoint us like the second generation. Instead, we get a really efficient hybrid at a nice price that doesn't completely sacrifice power, all packaged in a handsome, useable and honest-to-goodness comfortable package. After an awkward adolescence and a subsequent sabbatical, the Insight has finally grown up. Honda has learned from is successes, as well as its failures, and redeemed the Insight.