Behind the wheel of BMW’s ragtop Hail Mary effort

MIRAMAS, France - The sun is warm, the breezes are cool, and the road is winding. All is well in the south of France, particularly when driving the 2019 BMW Z4 prototype – a new roadster coming to market in spite of the public's seemingly insatiable appetite for lumbering crossovers and coupe-ified hardtops.

It's safe to say the car I'm testing wouldn't exist without BMW's technical partnership with Toyota, which trades hybrid drivetrain technology for a sporty platform that will be shared with the Japanese manufacturer's upcoming Supra. That means some things have changed. For starters the old model's retractable hardtop is gone, replaced with a simple folding soft top that helps trim weight and lower the center of gravity, and takes 10 seconds to deploy at speeds up to 31 miles per hour. Another added benefit: the 93.5-gallon trunk volume remains unchanged, regardless of top position. Some of the Z4's weight savings from aluminum construction are ameliorated by chassis reinforcements in the form of cross members that increase torsional stiffness 20 percent. Though the Z4's wheelbase shrinks about an inch, front and rear track are wider, width increases by 2.8 inches and bumper-to-bumper length extends by 3.2 inches. Despite the dimensional gains, overall mass remains essentially the same, at 3,384 pounds.

Power comes from the same single turbo, twin-scroll 3.0-liter B58 straight-6 engine you'll find in Bimmers like the M240i, with Z4-specific calibration. But unlike the European version that gets stuck with a particulate filter for their tighter emissions rules, Stateside-bound Z4s will enjoy a juicy 50-horsepower gain that brings total output to 382 hp, while torque is a thumpy 369 lb-ft. 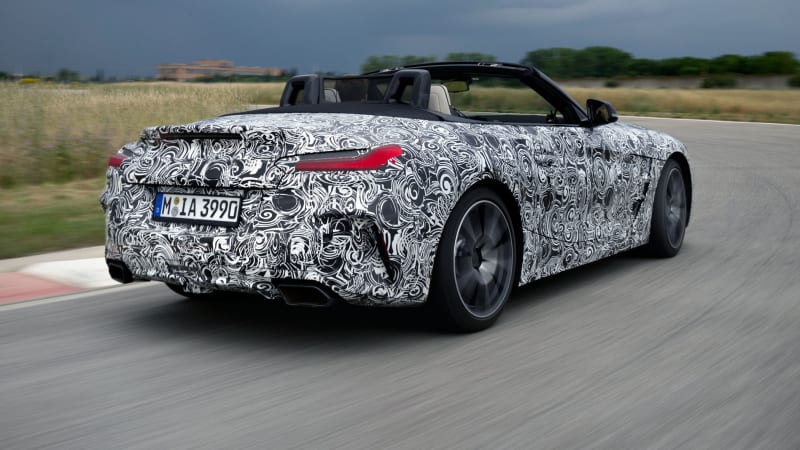 My time at BMW's private Miramas test circuit kicked off with familiarization laps in an M2 and M240i, worthy steeds for benchmarking the diminutive Z4 roadster. Unlike the coupes, which are saddled with the weight and dimensions of small rear seats, the Z4's cockpit is driver-centric, with a new TFT dashboard and uncomplicated switchgear that includes BMW's familiar transmission tunnel-mounted Comfort/Sport/Sport+ rocker switch. The control manages variables like throttle response, the ZF 8-speed's shift behavior, valving on the adjustable shock system, and the electronic differential's power delivery and torque vectoring characteristics.

In its baseline setup, the Z4 feels composed, offering a middle-of-the-road balance between chassis tightness and compliance. Dial it up to Sport, or better yet, Sport+, and the persona changes significantly: body roll is noticeably reduced, and the steering feels dialed in nicely with the chassis, delivering a level of responsiveness that makes the car beg to be tossed through corners. Sure, the stiffer shocks make an obvious difference.

As does the next generation of electric-assist steering, which conveys greater feel in Sport and Sport+ without an artificially heavy steering feel. "Individual" allows each parameter to be calibrated independently. Uneven tooth spacing on the steering rack produces a ramp-up in ratio – it's subtler than the too-aggressive ramp in the M240i. The Z4's 19-inch 255mm front and 275mm rear Michelin Super Sports help out by offering a linear relationship between input and response. 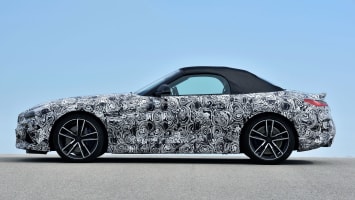 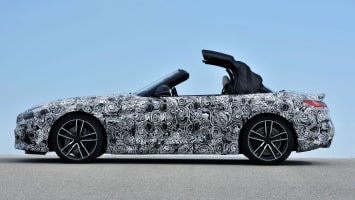 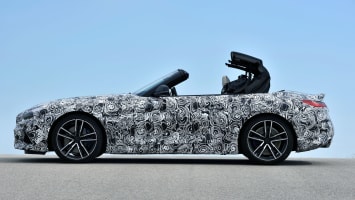 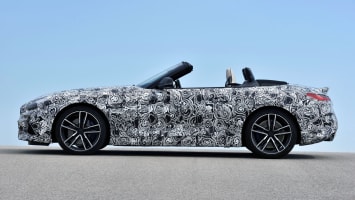 The Z4's electronic differential's variability plays a surprising role in the drive mode settings. I took some laps with a BMW engineer in the passenger seat, and controlling the e-diff with a laptop he demonstrated that the Z4's levels of braking stability, turn-in sharpness, and torque vectoring upon exit can be dramatically affected with a few keystrokes.

The more crucial test of the Z4's capabilities came where this roadster will no doubt spend the most of its time: on the road. Top-down driving with a small wind deflector in place behind the seats offered a relatively quiet, turbulence-free cabin. The small, twisty roads near the track offer a nice challenge for the Z4, as does the local driving population's questionable lane discipline, an issue which tests the reflexes of driver and vehicle alike. While the most aggressive drive setting is stiff enough to inspire confidence, it's never jarring, which is perhaps in keeping with the Z4's status as a non-M performance car.

While I would have preferred it to be a little stiffer, the underpinnings match the car's sporting personality. The chassis feels solid and the suspension is communicative, in the way drivers have come to expect from BMWs of yore. Also satisfying is grunt: even in its neutered European form, the S58 six-cylinder produces loads of power, enough to launch to 62 mph in 4.4 seconds. When you're not making that virtual tachometer needle spin, the Z4 is a more sedate highway cruiser than its predecessor thanks to more variable suspension controllability and better chassis tuning. New niceties like a 5-Series-sourced heads up display add to the feeling of refinement. 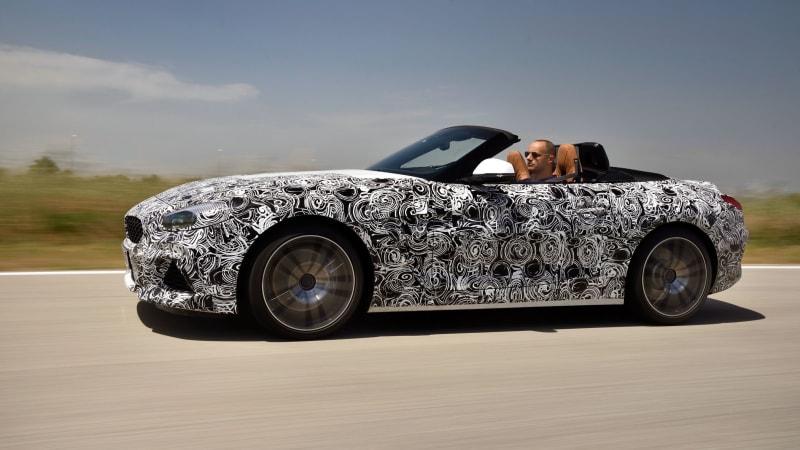 As for its looks, I laid eyes on un-camouflaged Z4s in matte black and red and felt the overall design seemed more successful in the understated dark scheme than the red finish. While the clamshell hood integrates nicely with the body, some of the overall proportions seem a bit mismatched, a trait which was emphasized when the sheetmetal was finished in red. Interestingly, BMW has departed tradition in a few ways: The headlamps take a vertical, not trademark horizontal orientation, and the kidney grilles incorporate mesh pattern in the space between the ribs.

With the roadster market shrinking – the Mercedes-Benz SLC is a lame duck, and Porsche's 718 Boxster lost core enthusiasts after dropping two cylinders – the BMW Z4 will likely grow its relative fanbase (even if Z4 sales are a rounding error for the company overall). Regardless of its commercial impact (or lack thereof), the Z4 is a more important vehicle for BMW than it might seem on paper, if only because it embraces the purity of a top-down performance machine that's focused on driving pleasure. These are challenging times for the shrinking roadster genre, and the Z4 presents a not-so-subtle mechanical urging to enjoy this moment in history while you can. 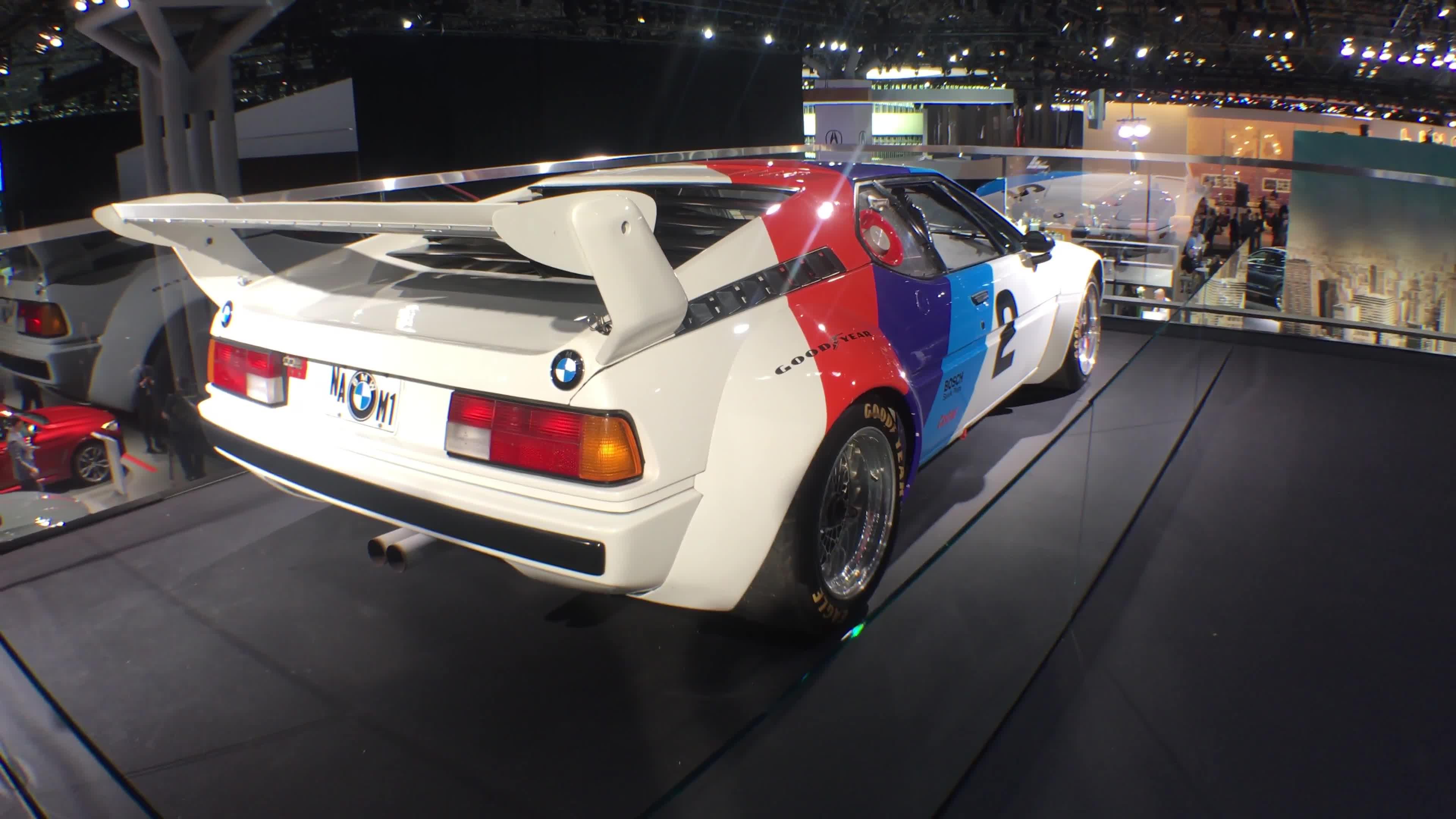