John Beltz Snyder
ANN ARBOR, Mich. — We like driving Mazdas, even if it's not the Miata, because they've always got an underpinning spirit of enthusiasm that makes even the slowest Mazda3 or the heaviest CX-9 at least somewhat entertaining. So when Mazda announced the refresh of the Mazda6 for the 2018 model year, we perked up.

A new engine and some other refinements are exciting, sure, but maybe more important is the redesigned interior. Mazda's interiors haven't always impressed, but over the years they've improved — and this generation of the Mazda6 up until now has been an example of that improvement. Fortunately, because they're fun to drive, we've been able to overlook some interior foibles.

Much attention was paid to noise, vibration and harshness (NVH). The company says it made 70 changes, from tires to suspension geometry to sound deadening materials, in order to make the car more comfortable going down the road, while maintaining its fun driving dynamics, and none of them include active noise cancellation. 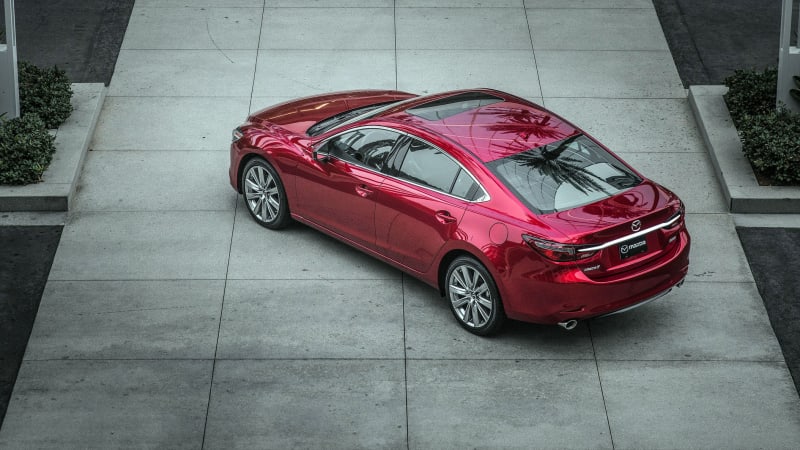 Of course, the turbocharged version of the 2.5-liter Skyactiv-G engine should help with the fun. We got behind the wheel of the 2018 Mazda6 2.5T, in top-tier Signature trim, to drive it on some of our favorite Michigan roads. We were especially interested in figuring out whether the interior lived up to the hype, and whether the other refinements would dull the car's driving dynamics.

Mazda seems like it's laying the groundwork to pushing its brand upmarket. With exterior design nailed down — the Mazda6 is a handsome sedan, and receives minor tweaks for 2018 to make it more so. In fact, this car is laden with the automotive equivalent of sex appeal (which some would just call sex appeal). It's absolutely magnetic. If you're not feeling it, check it out from a different angle; it'll change your mind.

As we mentioned, the company has turned its attention to the experience inside the car, and in addition to new materials inside, it has a new top-tier Signature trim level, which Mazda refers to as "aspirational" — but at $35,640, it's not exactly out of reach. 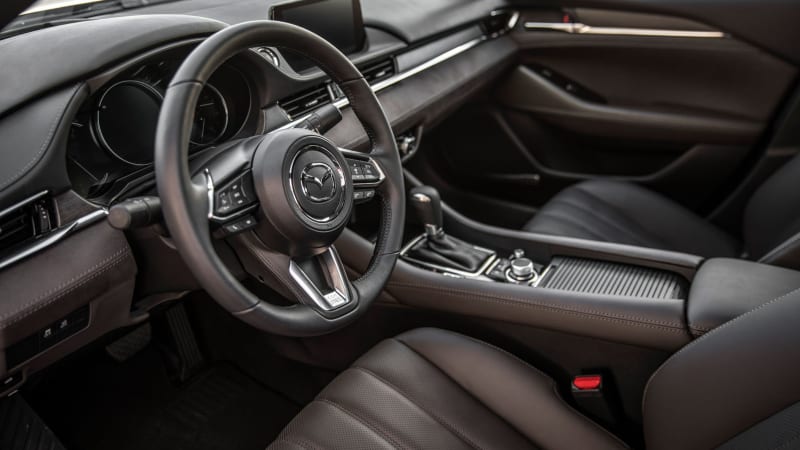 It's rare that we get into any sub-$40k car and start caressing the interior with both eyes and fingertips. It happens rarely – the last one was the Honda Clarity PHEV, which was a real surprise. The 2018 Mazda6 marks the second occasion. Both times we were taken completely off guard by it. The Mazda, though, has the exterior charm to match.

The new seats are fantastic, too. They're wider and more supportive, spreading the load across more of the leg. They're shaped to provide a good posture — specifically in positioning of the pelvis — to give the driver a good sense of how the car behaves to inputs.

"To figure out how a car should move," Mazda development engineer Dave Coleman told us, "you have to figure out how people move." On the road, we found we have a good sense of balance, and never felt like we were fighting lateral G forces to stay steady in our seat.

The Mazda6 also has ventilated seating for the first time — standard in Grand Touring Reserve and Signature trim levels. Upscale!

Our only gripe about the Mazda6's interior has nothing to do with the refresh for 2018. Headroom is limited, front and back. If you're tall, you might feel a little claustrophobic about the proximity of the roof to your head. Your 6-foot-tall author was comfortable in the front with the seat as low as it would go. The back seat headroom was worse, despite ample legroom. 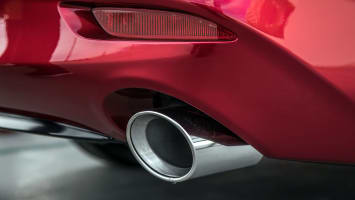 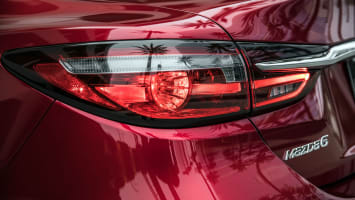 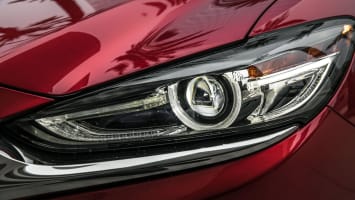 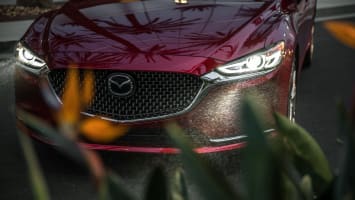 For 2018, the Mazda6 is now available with the striking Soul Red Crystal exterior color, though it costs an extra $595. It's one of those paint jobs that when you look into it, you begin to feel like Frodo looking into the bog (only without the dead guys). You become mesmerized until you fall into it. It's not quite as cerebrally spellbinding as the Structural Blue paint work on the Lexus LC, but it's pretty enough that we'd keep a fresh pack of microfiber cloths in the trunk for touch-ups.

There's an intelligence in the way this turbocharged Mazda6 provides power. It felt cool, calm and collected when cruising around, but the turbo 2.5 gave a nice, tempered roar when we mashed our foot to the floor. It's not quite as drastic of a personality shift as we found in the Audi A4,

This turbo motor provides a meaty 310 pound-feet of torque at a very cruisy-feeling 2,000 rpm. With 93 octane, horsepower peaks at 250 at 5,000 rpm; with regular unleaded, it is derated to 227 hp. Unless you're flogging the hell out of the turbo Mazda6 every day, and surpassing that wide, 2,000-5,000-rpm sweet spot, you might not notice the difference. That'll give you a little flexibility at the pump, without having to make any major sacrifice. 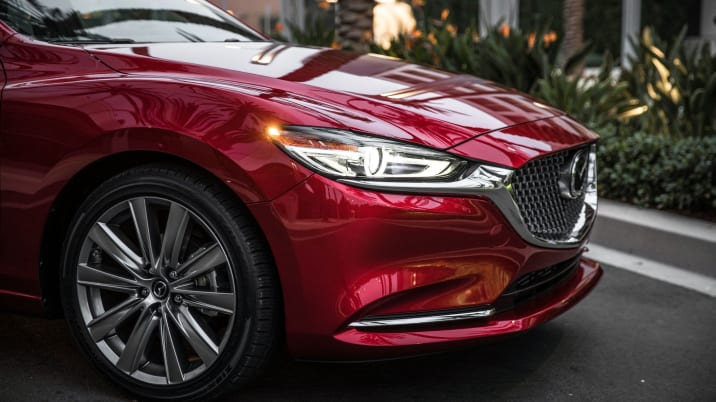 After dozens of miles of paying close attention, we only just started to notice the tiny half-heartbeat of turbo. Autoblog Associate Editor Reese Counts attempted to spot the lag when he took the Mazda6 for a night, knowing his attention to powertrain intricacies would either confirm our disprove your author's findings. Reese's experience confirmed our initial findings. Get Sade to a Mazda dealership; this 2.5T is officially ruled a Smooth Operator. And we only really noticed the sound of the engine when we started to cane it a little bit. That sound was pleasantly sonorous, but not loud enough to impede on conversation.

It's still fun, though. If your daily commute is feeling particularly soul-sucking in that sedan you're currently driving, the turbocharged 2018 Mazda6 might just be the antidote you need. It sacrifices little in balance with a 60:40 front-rear weight ration compared to the naturally aspirated versions 59/41 distribution. In addition to being comfortable and fun to flog in a straight line, the new 6 is also still adept at cornering. It's pointy, and traces well without a feeling of nose-heaviness. As lateral G force builds, you can feel it start to turn, then hunker down, bite in and follow your line through the corner. The moving stance on this thing is spectacular, and we suspect no small part of it is due the new rebound springs that begin to pull the outboard side of the car back down as the inboard suspension loads up.

Driving along the disgracefully cratered paths of asphalt we call roads here in Michigan, we found the new Mazda6 to live up to its promise of a quiet, refined ride. The suspension was taut enough to feel a connection with the road surface, but compliant enough to soak up the many irregularities with the briefest quiet thump. Wind noise was kept well in check, too. Kudos to Mazda for these refinements, especially because the engineers managed to keep the Mazda6 engaging to drive. 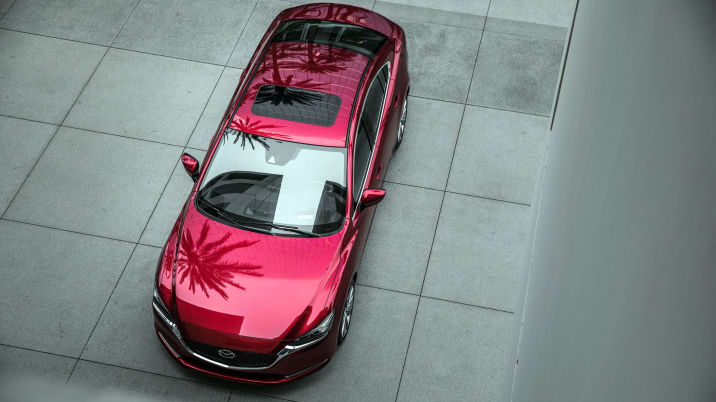 Overall grip wasn't spectacular, however. Coleman admitted Mazda made a tradeoff with the tires, going for a set that was quieter, and making up for the dynamic losses through clever re-engineering. Basically, it allowed a little "slop" in the tires, while removing it from the steering feel. Mazda took the cleats off, and put on running shoes. The result is a smooth, quiet ride that's a bit more isolated than before in a straight line.

Thankfully, when the tires do begin to give up grip, you can feel it coming on, and the car is already pointed where you want to go thanks to a well-balanced chassis. If you're in the tiny minority of potential owners who will notice, care, or be willing to do anything to reverse the tradeoff between grip and comfort, a well-chosen set of tires will be all you need to give this car a little more bite, and you'll still benefit from the dozens of other NVH improvements Mazda made.

Simply put, the turbo Mazda6 is an evolution — a polished distillation, even — of an already wonderful Japanese sedan. While it's not quite as buttoned down an Audi A4, but it's a pretty good facsimile of one with a dose of Japanese artistry. If you're willing to trade some of the high-end technology and that German attention to detail and precision for a little bit of soul (and a few thousand dollars remaining in your bank account), you'll really love what Mazda has done with its flagship sedan.

This car does an amazing job of bringing its strengths to the forefront, and hiding its weaknesses from all but the shrewdest and pugnacious observers. If you're looking at an entry level luxury sedan — a realm of vehicle that often finds its way back to the dealer's used lot within a year — a well-optioned Mazda6 might serve your needs better, and for less money. For fun, the updated Accord is close competition, but for comfort, the revamped Mazda would be hard to beat in terms of the refinement/value equation.