Hyundai looks to rattle the Civic Si and VW GTI 7.5
The 2019 Hyundai Veloster is a revitalized version of a type of car many mainstream automakers are slowly giving up on entirely: the affordable sports car. Rivals like the Honda Civic Si and Volkswagen GTI spring to mind, but, generally speaking, car companies crank out more and more SUVs and crossovers while this once thriving segment dwindles in numbers. That's too bad, because it takes only a few minutes behind the wheel to realize the crossover and SUV crowd are missing out on a lot of driving fun.

Styling is subjective, though we'd say Hyundai's design team did an excellent job transferring the Veloster's unique three-door design into a revitalized new shape. The 2019 Veloster is 0.8-inches longer and 0.4-inches wider than before, though the most noticeable changes include the large cascading front grille, along with a cleaner and more aggressive look at the rear. The new version looks like a cross between a sport coupe and, say, a high-end sneaker. It stands out, and that's a good thing in a world ruled by crossovers.

Once again, the two doors on the passenger side add a degree of practicality compared to a traditional coupe, eliminating the need to climb over a folded front seat to gain access to the rear seats. The hidden door handle helps the third door blend neatly into the bodywork. Hyundai says rear headroom has increased by 0.6 inches, though it gets snug back there for anyone close to 6 feet in height. Skip the optional sunroof, since it takes up a few precious millimeters that could be better used for the craniums of rear occupants. Cargo space measures in at 19.9 cubic feet with the folding 60/40-split rear seatback in place. 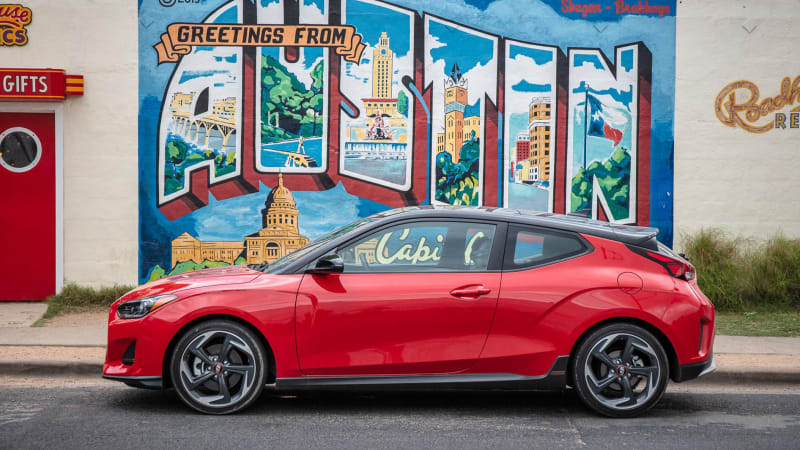 Like the exterior, the cabin gets a thorough redo for the 2019 model year. The overall control layout is logical and getting accustomed to the touchscreen infotainment is quick and painless. Apple CarPlay and Android Auto compatibility are standard, a major plus point for tech-savvy car buyers in this segment. Some cabin plastics are hard and look cheap, especially the panels on the upper half of the doors, exactly where you'd rest an arm with the windows down during a sunny summer drive.

But it's the dynamic bits that make the biggest contribution. Rather than removing sport-tuned (i.e. more expensive parts) from the car to keep the price low, the Veloster receives mechanical upgrades that help sharpen the handling and provide a more connected feel to the road.

These modifications include a new multi-link rear suspension fitted to the entire model range. This replaces a more mundane torsion-beam setup used in the first-generation model. Key suspension elements are also crafted out of aluminum to trim weight and sharpen driving dynamics. Aluminum knuckles in the front suspension alone shed 5.3 pounds at each corner, according to Hyundai's calculations. A similarly targeted use of aluminum in the rear suspension – which is shared with the Elantra GT – helps trim an additional 4.2 pounds from each corner. With suspension components, every ounce makes a difference in terms of handling dynamics. 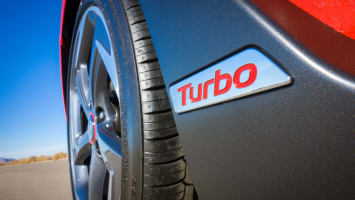 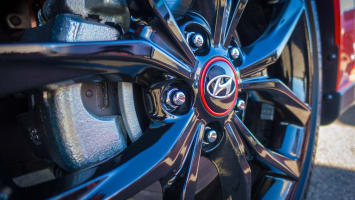 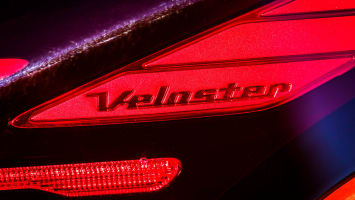 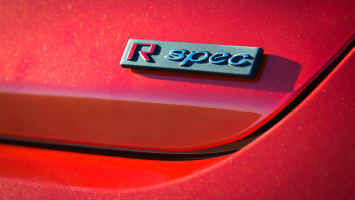 While the previous Veloster very much felt like an economy car in funky clothing, the new model actually feels like the sport compact car those clothes imply. It's still economical, though, with an entry price of $19,385 (including the $885 destination charge). The base Veloster is powered by a 2.0-liter four-cylinder that delivers 148 horsepower and 132 pound-feet of torque at 4,500 rpm. A six-speed manual gearbox is standard, while choosing the optional six-speed automatic nudges the price by $1,000. Estimated fuel economy starts at 25 mpg city and 33 mpg highway with this engine and the manual.

Unfortunately, we didn't get a chance to test that base model during the press launch in Austin, Texas. Instead, we sampled two variations of the Veloster Turbo: a fully-loaded Turbo Ultimate DCT with the optional seven-speed dual-clutch transmission, and a Turbo R-Spec fitted with a six-speed manual. Both come with a turbocharged 1.6-liter four-cylinder engine that delivers 201 horsepower and 195 pound-feet of torque from 1,500 to 4,500 rpm.

With all that torque available down low, and an impressively flat torque curve, the Veloster Turbo models packs more punch than the horsepower figure suggests. Acceleration when powering around tight corners, or merging into Austin's surprisingly fickle rush-hour traffic, is strong and purposeful. 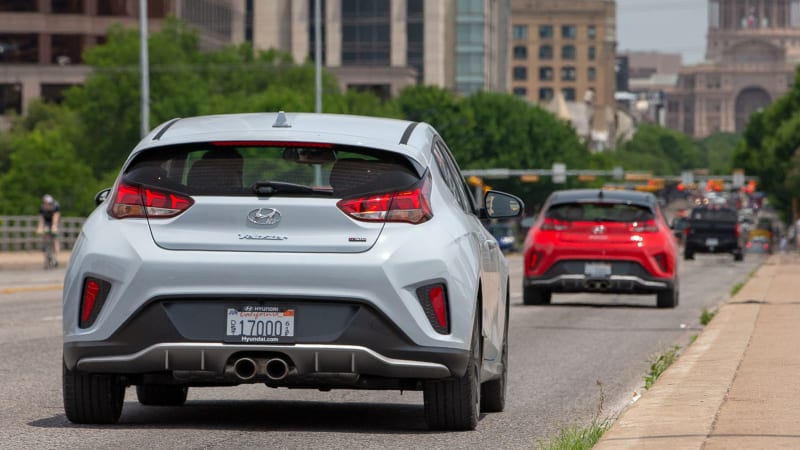 The Turbo DCT we drove starts at $29,150, which is steep compared to the base model, but it's worth remembering the Ultimate comes loaded with larger 8-inch touchscreen (versus the standard 7-inch unit), a sunroof, 18-inch alloy wheels, head-up display, full leather seating, a contrast black roof, and safety items like blind-spot and forward-collision warning.

The Veloster Turbo has three available drive modes: Normal, Sport, and Smart. We spent most of our driving time in Sport mode, which sharpens throttle response and adds further heft to the steering. Regardless of setting, the steering is nicely weighted, and even in Normal mode the Veloster Turbo feels sporty enough to remind you that it's a fun little hatchback suitable for enthusiasts. 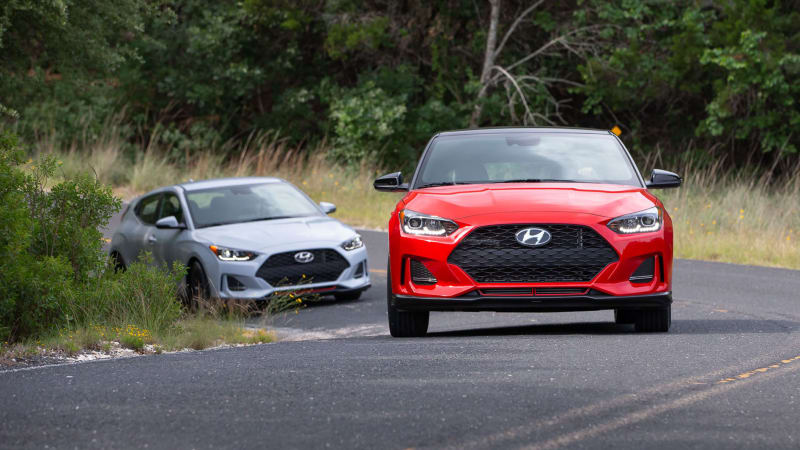 The Turbo R-Spec, meanwhile, is Hyundai's direct assault on the Civic Si, which similarly is offered only with a six-speed manual gearbox that offers solid engagement and a forgiving clutch with suitable heft. While it lacked the leather trim and fancier features of the Ultimate DCT, the Turbo R-Spec's price of $23,785 (as tested) makes it the better choice for performance enthusiasts who don't want to break the bank. Not that it's bare bones, since the R-Spec comes with a sport-tuned suspension, Infinity premium audio, LED headlights and taillights, and tenaciously grippy 225/40 R18 Michelin Pilot Sport summer tires.

Hyundai put some real thought into this car, and deserves credit for not dumbing down the mechanicals of the 2019 Veloster. The revised suspension pays dividends, and the turbo motor punches above the weight its raw numbers would suggest. Not to diminish our enthusiasm for the Veloster Turbo at all, but we're now even more excited to see what the Veloster N can do later this year when it arrives with 74 additional horsepower.