That bikini top is ready for a summer debut

The upcoming Porsche 718 Boxster Spyder has been spied testing on the Nürburgring. The last time we posted spy shots of the Spyder was in January, a cold time of the year to flaunt its new bikini top above the shapely engine cover. This time around, the Spyder's lapping the famous German race track, looking very production ready.

The test vehicle here, free from any unsightly disguise, features U.S.-market touches like the side marker lights and a rear-bumper license plate indentation that is narrower than European vehicles have. It is expected to debut this summer, a couple of short months away. The ceramic brakes' yellow calipers can be seen through the dark wheel spokes, as opposed to the red numbers on the previously sighted car.

Rumors are circulating that the new Spyder would be the last generation to use a naturally aspirated six-cylinder, and some rumors even include the 911 GT3's four-liter six in it, detuned to 430 horsepower. But all we can really say is that the exhausts on the new Spyder are bigger, and it's not yet clear what that represents. At least it will have a six-speed manual gearbox, with a possible PDK transmission option. 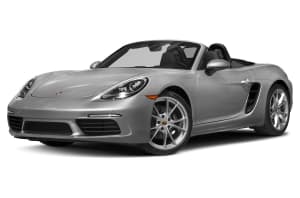