We tell you what makes the new Sierra unique.

Reese Counts
When the 2019 Chevy Silverado debuted at the Detroit Auto Show in January, GM's Mark Reuss promised that the new 2019 GMC Sierra would have some significantly different styling and features than its corporate sibling. Previously, the Sierra has been little more than a Silverado with new front and rear fascias and some extra chrome inside and out. Well, Reuss was right. In addition to new sheetmetal, the Sierra exclusively gets the slick MultiPro tailgate and CarbonPro carbon-fiber bed box

The tailgate really is trick. At the debut, GMC had multiple demonstrations, with engineers walking us through all six different configurations. Like all Sierra tailgates, the MultiPro version uses an aluminum skin to reduce weight. It's easy to tell which tailgate is which, as the MultiPro has a distinct cutout in the middle where it can fold down or extend. It can be used to extend the bed, drop to allow easier access, provide a sort of workbench, or be used as a step to help get into the bed. Yes, there's even a handle. Ford who? 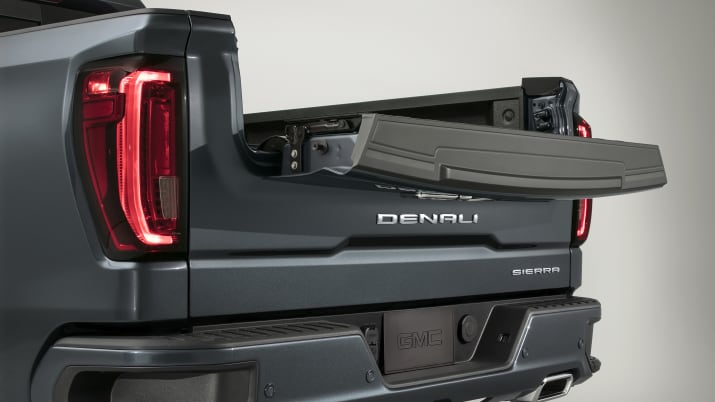 The step itself can support up to 375 pounds, 75 pounds more than Ford's similar tailgate step. This tailgate really is unique to the Sierra and is standard on SLT and Denali models. That said, the power-operated tailgate from the Silverado won't be coming to the GMC. Chevy gets its own exclusive, too. 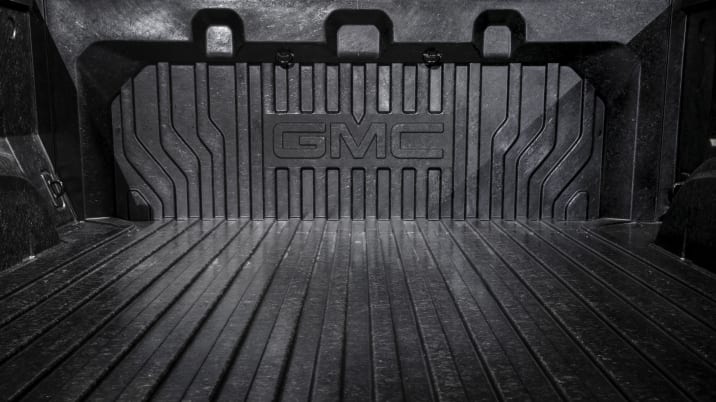 The Sierra's other big exclusive is the carbon-fiber reinforced plastic bed box. CFRP replaces steel inside the bed though not on the fenders. The bed uses four pieces; one for the bottom, one in the back and two along the sides. This isn't a CFRP. There is no steel hiding underneath these panels. Just take a peek underneath.

The bed is a composite that uses 1-inch carbon-fiber threads, not a weave. Sheets of CFRP are molded and quenched — a process where the plastic coagulates and solidifies, locking in the carbon fiber — in just 60 seconds. That allows GMC's supplier to crank out these much more quickly. The finish looks like black fiberglass, though an engineer said that this wasn't the final production version. The final model will have different textures in order to improve grip and keep things from sliding around. 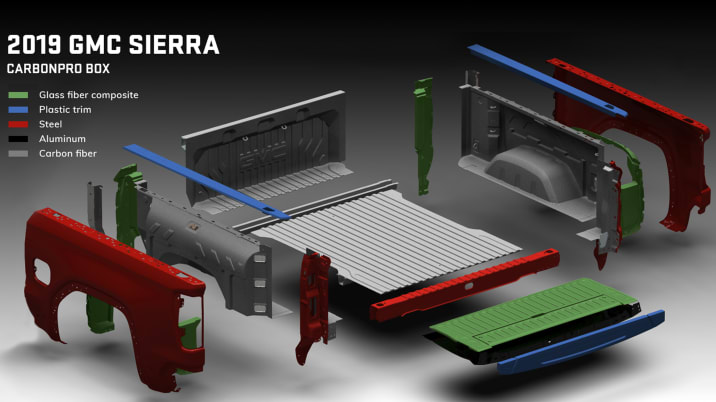 GMC is touting the material's dent and corrosion resistance, though it remains to be seen how well it holds up to cracking. A video at the reveal showed people going after it with hammers and cinder blocks, but in-person demonstrations weren't available. The CarbonPro bed also weighs 62 pounds less than the equivalent steel bed.

Like the tailgate, the CarbonPro bed is just for Sierra. In fact, it's only available as an option on short-box Denali models. Pricing hasn't been announced, but don't expect it to be cheap. That said, scale should eventually help lower costs in the long run.