Our 2018 Jaguar F-Pace has an infuriating shifter

The rotary dial offers no benefit to a traditional shifter.

Reese Counts
Let me preface this by saying that I quite enjoy our long-term 2018 Jaguar F-Pace. Its quick, handsome and pretty good on a road trip. It handles well for a crossover, too. My biggest gripe with the F-Pace is the interior, and my biggest gripe with the interior is the damned rotary shifter. I've never fought a vehicle so much just to get it to shift into reverse and neutral.

I have a tendency to rant, but usually offline, in the company of friends and under the influence of a few drinks. I've spent a lot of time behind the wheel of the F-Pace, and an incident this week in an automatic car wash this week prompted this post. Simply put, it took probably 10 seconds for me to get it to shift into neutral and another 10 seconds to get it back into drive. This is annoying in any situation, but when you're holding up a line of cars trying to wash off a thick layer of salt and ice, it's infuriating.

The rotary shifter simply wouldn't rotate into either drive or reverse. This might be user error and it might be exclusive to our particular F-Pace, but I don't recall have the same issue in our XE (I admittedly drove it less) and I definitely have never had such problems with other shifters. Not even the BMW-style fixed rocker type or weird handle ones in the Toyota Prius. I even consulted the owner's manual to make sure I'm doing it properly. The only thing I can think of is that I'm not putting enough pressure on the brake pedal while turning the dial. 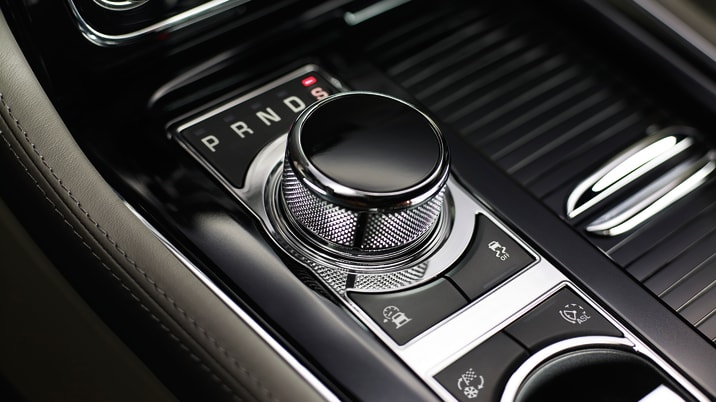 Yet, even those editors who haven't experienced this problem admit that the design has lost its way. Jaguar introduced the rotary shifter in the original XF back in 2009. At the time, its housing was compact and offset, serving the functional purpose of freeing up space for center console storage (as you can see in the photo above). The same concept was later applied to the Jaguar XJ and copied in the Ram 1500. Now, compare that design to the shifter in the F-Pace (as well as the XE and current XF). It's right in the center with a bezel that takes up as much room as the shift boot on a manual transmission. There's no added storage benefit and the surrounding piano black trim collects dust and fingerprints like a forensics squad. In other words, instead of a space efficiency solution, it's a space-robbing novelty that drives me nuts at the car wash.