The number is right there, nestled smack in the middle against the windshield in red: 575. In case you missed it, there are another four red 575s stitched into the seat backs. You might excuse Jaguar for the numerical ostentation, but with manufacturers taking the horsepower arms race nuclear, the 6-year-old XJR sure could use a hook. What better way to stand out than an engine output humblebrag?

The $122,400 Jaguar XJR575 gains 25 horsepower for 2018 thanks to software recalibration, which helps scoot the 17-foot-long four-door to 60 mph in a claimed 4.2 seconds. I'm gunning the XJR575 along the mountainous passes near the Alvão Natural Park in northern Portugal to find out whether the upgrade is enough to keep this underdog relevant in the fevered pitch of the high-dollar sedan market.

Glance at the Jag in profile, and you might doubt its athleticism. Though nearly identical in length to a long-wheelbase BMW 7-Series and Mercedes-Benz S-Class (and 1.8 inches shorter than the Audi A8L), the XJR575's sloping rear window and rounder styling lend it a somewhat lazier, more lavish appearance. It's also long in the tooth, this design having been first introduced in 2009, but it wears its age surprisingly well. Frankly, you just don't see XJ-series Jags as often as their strong-selling competitors, and that keeps them looking fresher, somehow. In contrast, the Germans have kept their exterior lines purposeful and contemporary looking, with more frequent redesigns furthering their cause. 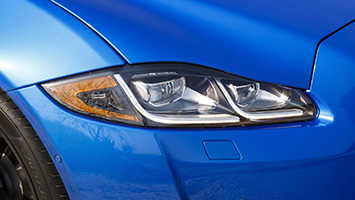 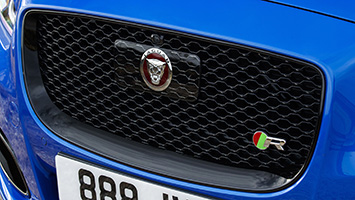 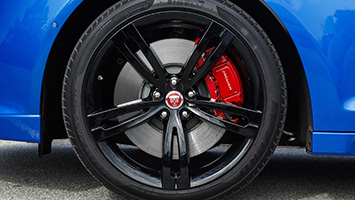 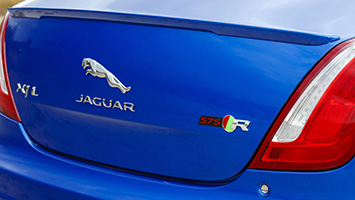 Climb inside, and the XJR's premium trim lends a bit more modernity to the familiar cabin. For starters, the diamond-quilted and perforated leather seats offer solid support, but they might be a bit firm for long hauls. Unlike other XJs, the XJR and R-Sport trims don't offer a massaging feature, an unfortunate sacrifice that is available on most, if not all, of the competitive set. The rear quarters do, however, offer enough legroom for serious stretching out. Tall swaths of carbon fiber trim the door panels while another thin rim of carbon extends around the dashboard, a design shorthand for sportiness despite the fact that the XJR is only available stateside in long-wheelbase form. An Alcantara headliner aids the high-end argument.

A few aging elements show cracks in the façade, among them the ungainly seams at the dashboard's center and switchgear that's grown more than a bit long in the tooth. At least Jaguar's controversial cylindrical shifter is pleasantly knurled, lending a feel of specialness over the dials found in the non-R models. New for 2018 is a larger, 10-inch multimedia touch screen that uses Jaguar's latest Touch Pro software. The system works adequately well, though it lags the newest interfaces from BMW and Mercedes-Benz, and is far behind the upcoming A8L's advanced, dual-screen setup. The digital instrument cluster is also a weak spot because of its less-than-razor-sharp resolution and middling brightness. Countering the arguments against the XJR's cabin is 4G Wi-Fi, an excellent 1,300-watt Meridian sound system and unique touches such as the giant eyeball vents rimmed in soft blue lighting, adding to the distinctive Britishness of this big-boned sporting saloon. 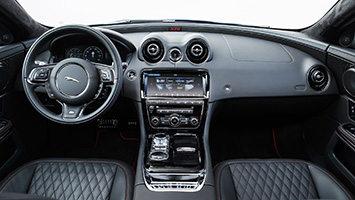 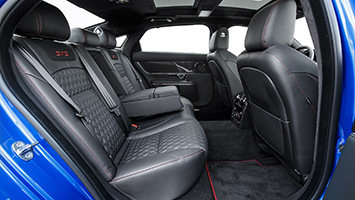 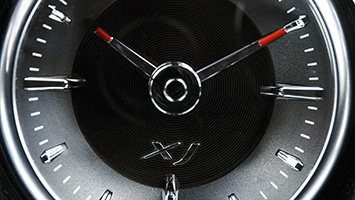 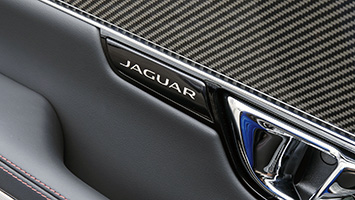 The Jag's supercharged 5.0-liter V-8 pulls hard from low rpms, delivering a plateau of 517 lb-ft between 3,500 rpm and 4,500 rpm. Acceleration isn't as brutal as the monstrously quick 603-hp, 664-lb-ft Mercedes-AMG S 63, but it's still strong and satisfying, aided by a smooth-shifting ZF 8-speed automatic. Also pleasing is the finely modulated exhaust note, which betrays just enough of the engine's mechanical soul without being intrusive or droning. The XJR's rear-drive-only setup requires some restraint off the line, as dropping the hammer can trigger the traction control system. However, intervention is relatively unobtrusive when it does occur. While the cabin is on the quieter side—a good thing—traces of wind noise do creep in at higher speeds.

The Jaguar occupies a relatively large footprint but turns respectably well, thanks in part to its relatively wispy curb weight of 4,156 pounds, which undercuts the big Bimmer and Benz by several hundred pounds. Aiding handling is a brake vectoring system that squeezes the inside calipers to help rotate the vehicle. As with the XF Sportbrake that I also tested on nearby roads, hustling the XJR through corners at a spirited pace can trigger whiffs of brake pad odor, which could spell more frequent pad replacement for folks who hustle the XJR regularly. Regardless of the means, the big sedan achieves its ends with impressive responsiveness, though the electric power assist steering can feel muted on-center. Ride quality is controlled but generally smooth thanks an adaptive suspension system that monitors vehicle dynamics 500 times a second. By evaluating g-forces and pedal inputs, the system manages to strikes a solid balance between crispness and comfort. But don't bother switching the drive mode selector to Sport, which is indicated by a checkered flag symbol: The ensuing throttle response feels unnecessarily jerky, making the challenge of smoothly modulating right-pedal inputs not worth the trouble. Brake feel is good, and the big red calipers deliver reassuringly strong stops. 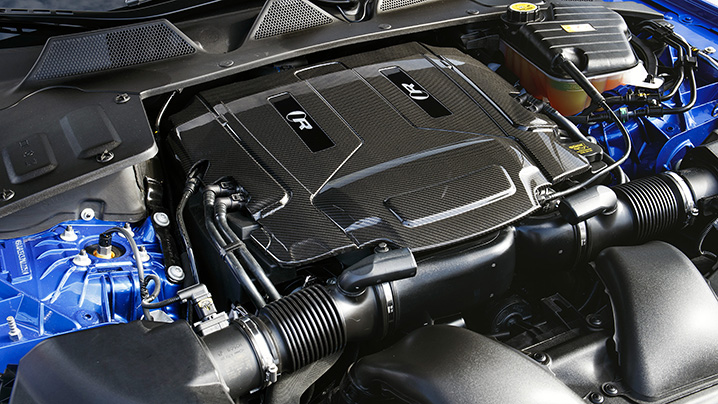 With Jaguar's expanding SUV and crossover lineup drawing much of the brand's attention these days, one can't help but wonder whether the aging XJ's future is in peril. Especially when it comes to limited production, high-end, go-fast sedans, it's becoming harder than ever to compete with the big boys such as the $138,800 BMW Alpina B7 and the $147,500 Mercedes-AMG S 63, not to mention the next-gen Audi A8L that will hit showrooms next fall. And since buyers of these plush, powerful sedans are unlikely to scoff at $20K or so in savings, the XJR575 faces a particular uphill battle.

However, Jaguar's flagship does offer distinctiveness within this competitive segment, one that's hard to find elsewhere. While every Tom, Dick and Harry on Wall Street is sporting a Benzo or Bimmer (not to mention more premium offerings from Aston Martin, Bentley and Rolls-Royce), the Jaguar still makes a niche statement with singular styling that's about as unique as its two exclusive colors, Satin Corris Grey and Velocity Blue. There may be excellent alternatives among big-ticket performance sedans, but few will stand out in the crowd like the XJR575.