2018 Lamborghini Huracán Performante Second Drive | The Lambo of the moment

Lighter, more powerful version of the Huracán is the best-performing Lambo of all time. Down the front straight, past the pits, over the start/finish line, sixth gear at 140 mph. Suddenly, the shrieking wail of the 2018 Lamborghini Huracán Performante's mid-mounted V-10 and hits me right between the eyes. It's an easy shot, since I'm wearing an open-face helmet.

Speed is not a problem for the Performante. This new lighter and more powerful version of the Huracán is the best-performing Lambo of all time. It just set the new production-car record around the Nürburgring Nordschleife of 6 minutes, 52.1 seconds. That's 35 seconds quicker than the standard Huracán. And Lambo says it can accelerate from 0 to 62 mph in 2.9 seconds, which is as quick as the Aventador S. Its 202-mph top speed still lags the top end of the V-12-powered Aventador by 15 mph, but does it really matter?

Completely flat, smooth as glass and just 1.8 miles around, Thermal's South Palm Circuit isn't exactly the Nordschleife, but the bathrooms are much fancier. Built in 2014, the luxurious Thermal Motorsports Club outside of Palm Springs, Calif., is an ideal facility for us to taste the 2018 Huracán Performante. If owners of the $274,390 supercar want a safe and controlled environment to wring out their new toy, chances are it will be at private amusement parks such as this. 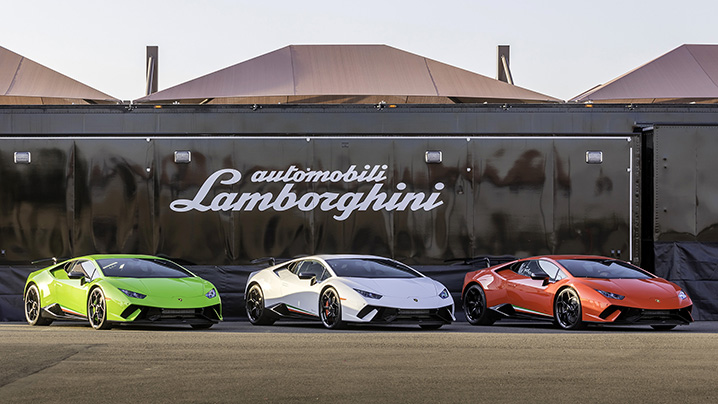 In the age of twin-turbos, the Huracán's naturally aspirated V10 is a (glorious) anachronism. In the Performante, it has been cranked up to 640 hp at 8,000 rpm and 442 lb-ft of torque at 6,500 rpm, a 30-hp and 40-lb-ft increase over the standard all-wheel-drive model, and it's all above 6,000 rpm.
Displacement remains 5.2 liters, but Lambo's engineers added lighter titanium intake valves, more aggressive camshafts, a less-restrictive air intake and a lighter freer-flowing exhaust system. The engine's compression ratio remains a stratospheric 12.7:1, and it runs into a very aggressive rev limiter at 8,500 rpm.

The Performante is 88 pounds lighter than the standard Huracán Coupe thanks to liberal use of the company's patented Forged Composite, which it calls the lightest, strongest and most innovative material ever used by Lamborghini. Chopped fibers embedded in a matrix of resins, it's sort of like carbon fiber 2.0, although its finish looks like high-tech camo with golden flecks. It's all over the Performante, including its massive rear spoiler, rear bumper and diffuser, front spoiler and its engine cover, which weights 21 percent less than the piece it replaced. Inside you see more Forged Composite on the dash, doors and console.

Lambo also stiffened up the Performante's suspension by 10 percent, the sway bars are 15 percent more aggressive and the A-arm bushings are 50 percent stiffer. But the coolest piece of the Performante, and what's really going to wow the crowd at local Cars and Coffee, is the new active aerodynamics system.
Officially called Aerodynamica Lamborghini Attive (ALA), the patented system opens and closes a flap in the front spoiler depending on conditions. When closed, the spoiler creates downforce for high-speed cornering and full brake conditions. When the small electric motor opens the flaps, which takes 0.2 second, it redirects the airflow through an internal channel and the underside of the car. This reduces drag, increasing acceleration and top speed. 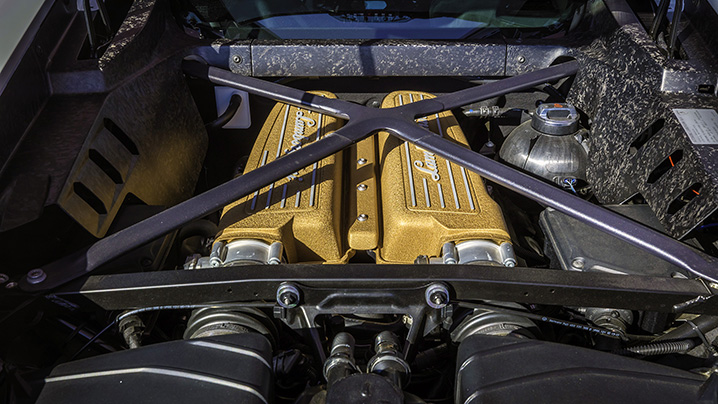 In high-throttle conditions, ALA opens the flaps, which routes the air through the rear wing's inner channels and through ridges underneath the wing, reducing drag. But here's the cool part: The air channel is split left and right and the flaps work independently, allowing aero vectoring for high-speed cornering. The ALA system can increase downforce and traction on the inside wheel, counteracting the natural cornering forces.

After 10 laps, it's hard not to be madly in love with this ridiculously antisocial supercar. Lambo says it weighs 3,047 pounds dry, and out on the track it feels small and light. Not exactly Miata miniature, but it's tossable and it likes to turn on the brakes. It also understeers a bit on power out just to keep you alive, but it will drift if you chuck it in and get back on the power quickly. Do it, it's also easy to catch with a small amount of counter steer.

Our codriver agrees. Sinya Sean Michemi races a Huracán in Lamborghini's Blancpain Super Trofeo North America. "Compared to the original Huracán, it feels quite a bit less understeery," he yells over the Performante's screaming V-10, which is mounted just inches behind our heads. 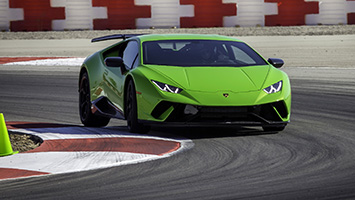 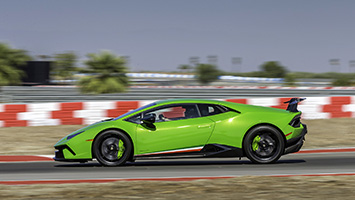 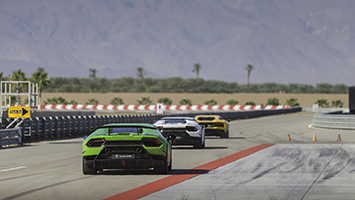 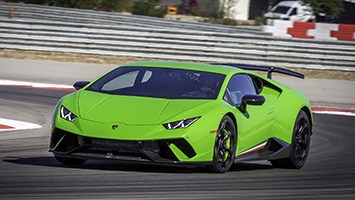 Most of the corners on this circuit are handled in second gear, although there are two good, long straights where we touch sixth gear and get to enjoy the upper-rpm pull and full song of the big V-10. The straights also reveal the silky and rapid gear changes from the Lambo's dual-clutch 7-speed, which Lambo geared perfectly to keep that goddess of an engine above 6,000 rpm.

There's also a three-apex right-hander with a fast third-gear entry at the end of the backstraight. It's the most challenging section of the track, and the Performante's stability is impressive as we enter hard on the brakes and drop it down to second to finish the corner hard on the power. It's massive 20-inch Pirelli P Zero Corsa's are incredibly forgiving, and the compliance of the suspension over the track's tall curbing is a nice surprise.

It's almost stupid how easy it is to drive this car fast. The Huracán's gargantuan cross-drilled carbon-ceramic brakes are foolproof, with telepathic pedal feel and awesome heat resistance even after constant lapping on a 100-degree day. There was a time not too many years ago that Lamborghini brakes would have caught fire and failed under such conditions. 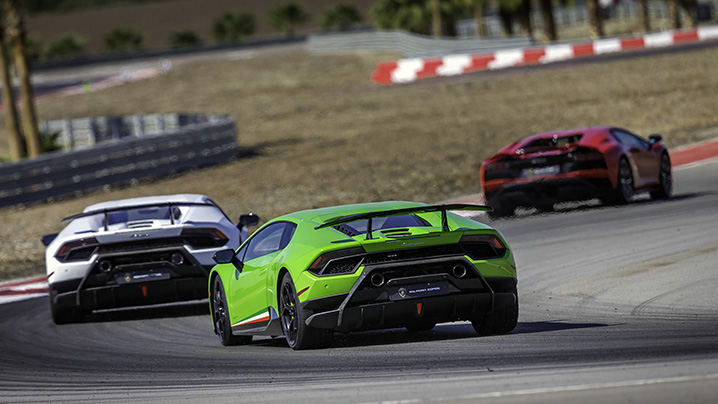 Lamborghini's ANIMA system offers three modes: Strada, Sport and Corsa. In Strada, Lambo says traction and stability are prioritized, and it's easy to find the point at which its electronic watchdogs step in on the track. In Sport, the all-wheel-drive system offers a more rear-wheel-drive bias, and the stability control system loosens up enough for some light rotation. Also, the transmission will upshift for you, even in manual mode. In Corsa, the transmission is completely manual, and the stability control allows for plenty of oversteer.

Lamborghini says demand for the Performante is high. However, buyers should know that there's a Spyder version coming and it's sure to steal thunder from this hardtop, especially in the States.

But the Performante's real issue is Lamborghini's new SUV, which will begin to overshadow the supercar the instant it is unveiled on Dec. 4. The much-anticipated Urus is the Italian automaker's most important new product since the Countach in 1974, and according to Alessandro Farmeschi, the COO of Lamborghini North America, it'll double the company's production when it goes on sale next year.

When that bomb drops, the Huracán Performante will no longer be the Lambo of the moment. Its 15 minutes will be up. Hell, that game clock is already ticking. But until then, let's enjoy the Performante for what it is: Lamborghini's best sports car ever. It's a masterpiece—a masterpiece with unfortunate timing.