MOJAVE, Calif. — The sunbaked sign at the Hyundai/ Kia Proving Grounds clearly indicates the speed limit on the banked oval: 120 miles per hour. But after a few perfunctory triple-digit parade laps, the Kia representative in the passenger seat isn't having any of it. With a wink and nudge, he discreetly permits us a few extra, unrestricted goes around the big course. Never one to turn down track time, we push the 2018 Kia Stinger down the 6.4-mile oval until I see an indicated 164 mph on the straight — the fastest we've ever driven anything built in Korea, let alone many of the contenders in the Stinger's crosshairs. Game on, Kia.

The early days of Kia's attempt to conquer the American car market were dominated with an appliance-like sense of economy, one reflecting a scrappy catch-up mentality opposed to the disruptive, luxury challenging tactics du jour. Subsequent attempts to globalize the brand have taken on a definitively more inspired, international flair, and the new Stinger is the strongest harbinger of that direction to date. The movement originated when Hyundai/Kia plucked design boss Peter Schreyer from Audi, eventually moving him up in an unprecedented promotion to one of manufacturer's three group presidents. Not only did Schreyer inject a sleek, contemporary look to the lineup, his promotion proved the brand was dead serious about creating striking designs.

The Stinger's styling does not disappoint. Apart from the familiar Tiger Nose grille and the letdown of non-functional (ie, ornamental) "hood vents," the five-seater's proportions and surface treatments feel sharp and fresh, purposeful and clean. Measured from bow to stern, the Stinger is roughly mid-class among its competitive set, while offering the practicality of a sportback design that enables decent rear legroom and 23.3 cubic feet of cargo capacity. But its considerable 114.4-inch wheelbase is among the lengthiest in its class, edged out only by the Audi A7, Porsche Panamera, and BMW 6 Series Grand Coupe. That said, the upper end of Kia's self-ascribed competition might be a bit of a stretch (sorry, pun intended) considering the unlikelihood of Porsche die-hards cross-shopping the $85,000 Panamera against this new kid on the block. 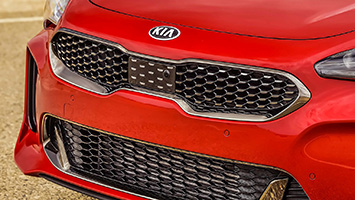 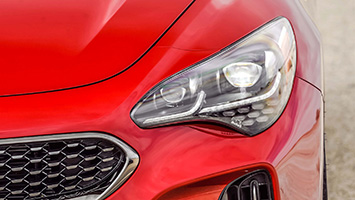 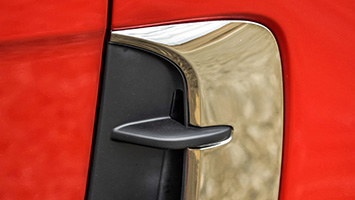 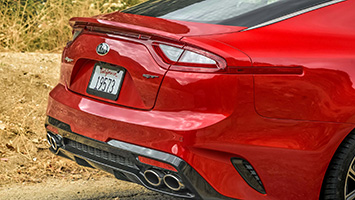 The other side of Kia's modern story involves the snagging of performance whisperer Albert Biermann from BMW's M performance division. Biermann was tasked with, in his words, "Making the cars drive as good as they look," which led to the Stinger's driver-focused intentions. Sharing a similar chassis and suspension architecture to the Genesis G70 and G80 (and slotting in-between, size-wise), Stinger's handling was tightened toward sharper performance. Some 6,000 miles were spent fine-tuning the chassis and suspension at the Nürburgring, as well as nearly a million miles racked up around the world. But the chassis tuning also involved location-specific processes like shutting down portions of bumpy L.A. freeways in order to analyze surface textures and replicate them at the 2-million-square-foot vehicle dynamics track in Mojave, a costly but necessary step towards ensuring adaptability to real-world conditions.

Those parameters make Stinger's challenge doubly daunting. On one hand, the big sedan must impart a look designer Gregory Guillaume describes as an evocation of the elegant grand tourers like the Maserati Ghibli that whisked bon vivants from the South of France to Paris — on the other, the plus-size sedan must deliver a sports car experience, meeting or exceeding the performance capabilities of established standards like the Audi A5 and BMW 440i Grand coupe, Infiniti Q50, and Lexus GS F Sport. Kia says the target zone is also larger sportbacks like the aforementioned Audi A7 and Porsche Panamera — no small feat for the ambitious Korean carmaker.

We spent the day taking Stinger to the mat on L.A.'s concrete jungle, running it through the notoriously twisted asphalt of Angeles Crest Highway to the Mojave proving grounds for some closed-course work (including the high-speed oval with the weirdly low speed limit). Two powertrains are available — the Stinger 2.0T ($31,900) powered by a 2.0-liter twin-scroll four-cylinder producing 255 horsepower and 260 pound feet of torque, and the Stinger GT 3.3T ($39,000), driven by a twin-turbo 3.3-liter V6 producing 365 hp and 376 lb-ft. Both are mated to an eight-speed automatic gearbox. We sampled a generously equipped GT 3.3T which, in all-wheel-drive form, tops out at around $51,000. While that ceiling is still cheaper than many of Kia's self-stated foes, it's notably higher than the four-banger's piddling low-$30s starting price. 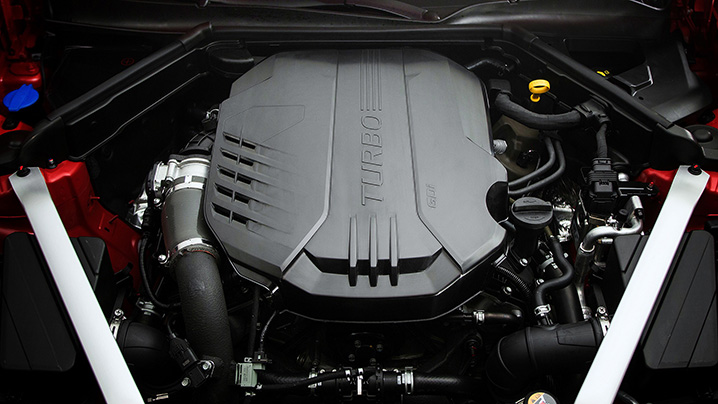 Swing the Stinger's weighty door open, and its interior presents a mostly honest, high-quality feel. Leather is standard across all models, though the top GT2 3.3T trim gets a more supple Nappa treatment. All 3.3T variants benefit from real aluminum surfaces inside, which helps impart a feeling of substance and authenticity, though bits like the faux leather dash topping betray the cabin's otherwise luxurious bent. The most prominent Kia elements remain the infotainment/navigation system's graphical interface, which displays on a fixed, tablet-style seven- or eight-inch touchscreen and a small digital screen nestled between the analog dashboard gauges.

On the city streets around our starting point in North Hollywood, California, the Stinger drives smaller than its exterior proportions might suggest. The cabin is well insulated from the outside world, feeling quiet and hushed save the smooth-sounding V6 exhaust note when the engine is pushed. The claimed 0 to 60 time of 4.7 seconds is quicker than base models of the Audi A7 and Porsche Panamera, and enough to make the Stinger feel spritely and eager when instigated. Though biased toward slickness over speed, the eight-speed auto tends to find the right gear. Taking over with the steering wheel-mounted paddle shifters isn't immediate enough to justify their use; best to let the computers to do their jobs. Similarly, the optional driver assistance package's lane departure warning and forward collision warning can also be a bit too aggressive for regular use.

Ride quality over the bumpy bits is firm but well-damped for a driver-focused sedan, and when our drive route took us to Angeles Crest Highway, brisk driving revealed solid body control and intuitive steering. While we welcome steering effort adjustability in theory, we found the Stinger to resemble Kia's calibrations in the past in which Comfort is overboosted, and Sport is artificially stiff; leave it in Normal, and it's just right. The chassis feels tight and planted, offering responsive turn-in and good mid-corner grip. 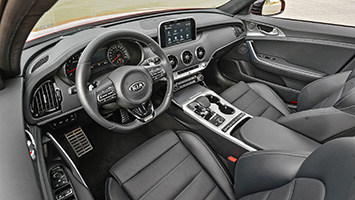 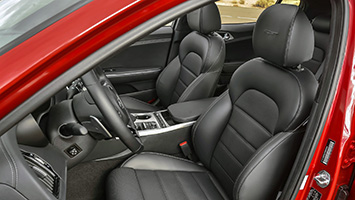 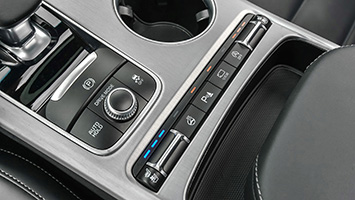 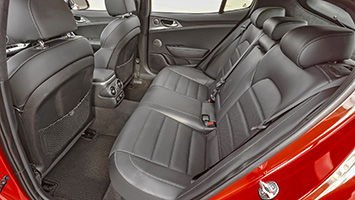 It wasn't until we stepped up our corner entry speeds and braking effort that the Stinger's feeling of mass became unmasked. Threshold brake to set up for an aggressive corner, and weight transfer makes the front end of the car feel too burdened. When asked about the unsorted feeling of weight transfer at higher speeds, Kia Senior Manager of Vehicle Evaluation Chahe Apelian said that our testers were built four to six months prior to the final production spec cars, and that "There will be noticeable improvements" in final form. Fair enough. At least the GT's four-piston Brembo brakes feel strong and confidence-inspiring, scrubbing off speed with linear predictability.

On a road handling course, the Stinger delivers neutral handling and no nasty surprises in the twisty bits — a good thing, considering we drove the closed courses with more abandon than on the road. Again at higher speeds, the Stinger felt a bit heavier than its lower-speed handling might suggest. Judging by the turn-in and weight transfer, I suspect there might also be some sorting to be done to the dynamic torque vectoring system, which brakes the inside wheel to help the car turn. But the Stinger's fundamentals seem strong, as evidenced on the high-speed oval where it felt stable and planted right up near its electronically limited 167-mph top speed. The drive home offered a smooth, quiet sanctuary from highway traffic, where most Stingers will likely see much of their time. 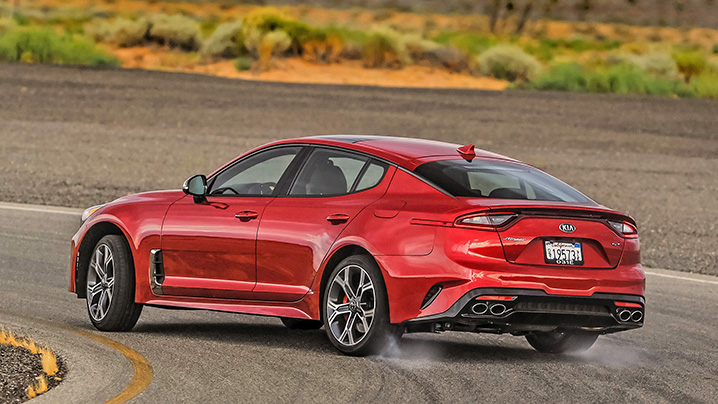 The fact that we're having a conversation about a 167-mph Kia speaks volumes to the brand's aggressive vision for the future, one that will only expand its embrace of speed, luxury and design. We trust that our tester's handling quirks were unique to its early build, as the underlying platform feels reassuringly solid, quiet, and capable — key attributes that ensure its competence among the world's best sport sedans.

And don't rule out even gutsier future iterations. When pressed, we were told, "It's fair to say that based on the career and history of Albert Biermann, he's probably got things up his sleeve. But we don't have anything concrete to announce at this time."

Few, if any, buyers will cross-shop the Stinger against the likes of the Audi A7, Mercedes-Benz CLS or the Porsche Panamera. Still, the Kia's attractive package and promising performance reinforce the idea that if you can divorce yourself from brand snobbery, this fresh-faced newcomer just might be the sleeper bargain performance sedan of the year.