Henry Ford's 33' classic boat Evangeline is for sale in Monterey UPDATE: "The bid goes on," as they say at Mecum.

Evangeline, a one-of-a-kind runabout built by Hacker Boat Co. for Henry Ford in 1923-24, is up for auction this Saturday at Mecum's Monterey Car Week auction.

John Hacker was one of Ford's lifelong friends, and they dreamed up the project as a collaboration between their companies. In the early 1920s, Ford commissioned several boats from Hacker, but Evangeline is the only known survivor.

Evangeline is powered by a 1,650-cubic-inch marine-converted World War I Liberty aircraft V-12 engine, making 450 horsepower and 1,250 pound-feet of torque — the same type of engine as its original, and a model produced by Ford during World War I. Evangeline is filled with design touches like its wraparound windshield and luxurious upholstered bucket seats.

Said Hacker: "This boat has more flare forward than any we have built up to this time in as much that Mr. Ford insisted on this and has an exceptional tumble-home aft. It is really the most beautiful boat we have ever turned out in a boat of this size and type."


Evangeline was sold in the 1950s and bounced among owners from coast to coast for years. Restoration began in 1987, and Evangeline debuted at the 2015 Lake Tahoe Concours d'Elegance, sweeping top honors. 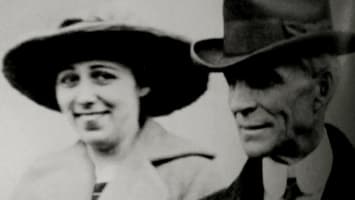 More intriguing than the boat is its namesake: Evangeline Coté Dahlinger, Ford's personal secretary, longtime close friend and, circumstances indicate, likely his mistress. She was the wife of Raymond Dahlinger, Ford's top race driver and the manager of Ford Farms. Ford gave her 150 acres in Dearborn, Mich., with a 38-room mansion on the Rouge River a mile from his house, plus a vacation home on Lake Huron, plus a Curtiss Seagull flying boat. (Evangeline was said to be the first licensed woman pilot in Michigan.) And Ford is widely believed to have been the father of Evangeline's son.