It's unusually hot in Western Washington; the early August sun beams through skies rendered hazy by fires a few hundred miles to the north. If you're not moving, it gets a bit oppressive, since there's just enough humidity to feel it and not enough wind to relieve it. Instead of huddling inside, window shades drawn, fan blowing hot air around impotently – this is how most Washingtonians, 75 percent of whom don't have A/C, handle the heat – we're taking our fan on the road.

The best way to beat the heat, it turns out, is to climb into the forests. For this adventure in body temperature regulation, we've got a Mazda MX-5 RF, the Miata's semi-targa-topped variant, and a few hours of time. And the Cascade Mountain's foothills, thickly coated with Douglas firs and, higher up, subalpine firs soaking up as much sun as they can in the short growing season. I've lived near the foothills nearly all my life, but there's a lot of the Cascades I haven't explored. One area is Chinook Pass, a mountain road that crests at 5,430 feet. Looming almost 9,000 feet above it is Mount Rainier, so close you can almost touch it. Just about 100 feet below the summit is Tipsoo Lake, startlingly clear and sporting enough wildflowers to make The Sound of Music look like a movie about Rommel's North Africa campaign. 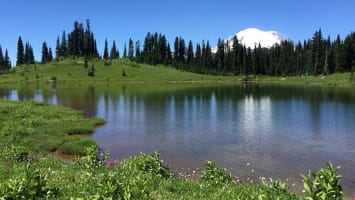 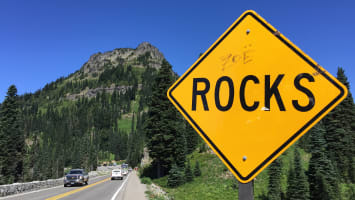 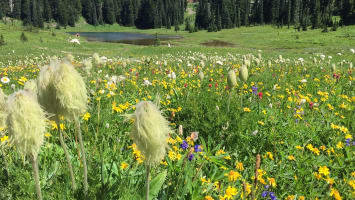 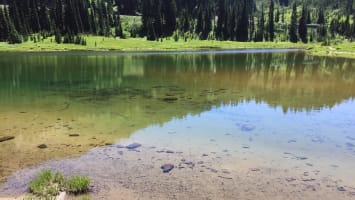 But that's jumping ahead a bit. Between me and the summit is about 90 minutes of driving, through the suburbs and into the Enumclaw Plateau, and then along the chalky White River and up into the mountains. Plenty of time to focus on nothing but the surroundings, and the quality of the cooling action provided by the little Mazda.

A quick word about the car, and my own biases – I love Miatas, but I have a complicated relationship with the latest MX-5, having owned a much more visceral (and much slower) first-gen car for about six years. On paper, it's this perfect modern interpretation of the original. It's light, it's a momentum machine, the steering's just a tad overboosted, and it has a playful amount of body roll while maintaining a healthy amount of mechanical grip. It looks aggressive enough, too, a major complaint of many folks about the last-gen car's Joker smile. The interior is largely brilliant, amazingly simple and interesting for such a lithe car. And yet, I have never found the new car to be as charismatic as my old Miata, with all its flaws. This puts me in the minority; most MX-5 fanatics find the ND to be a great compromise. Even some colleagues best known as anti-Miata partisans would put one in the driveway.

The RF builds on a great framework with some extra style. Gone is the one-handed manual softtop, and in its place is a complicated but effective targa-like panel. The flying buttresses go up, the targa panel folds away, the buttresses return sans rear window. If you don't check over your shoulders, the experience from the driver's seat is, to me, identical to a non-RF car. There's no unusual wind buffeting, plenty of airflow, decent views sideways and up. This was appreciated when the jagged Cowlitz Chimneys sawed across the space between me and Rainier as I climbed the pass. 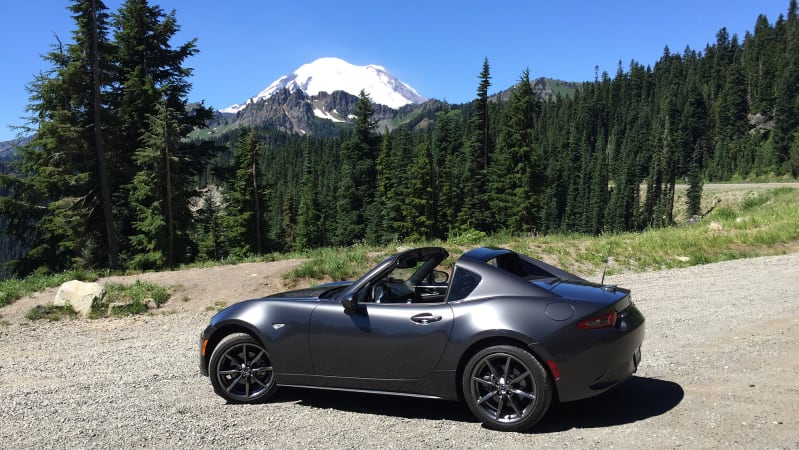 The areas west of the National Park that surrounds the huge base of Mt. Rainier are heavily logged, so there are fewer tree walls overhanging the two-lane highway to break up the heat with some shade. Once into the park, protected from logging since at least 1893 thanks to the Pacific Forest Reserve that became a National Forest eventually, the trees are old and thick. Moss and ferns carpet the soft beds of decayed pine needles, the air is cool and heavy. Diving into one of these shady spots from the hot surrounding forest is like jumping into a cool lake. The RF's rear apparatus doesn't block or lessen the chilling effect; it's functionally just like a full convertible. It stays cool and the trees stay thick and mossy, until close to the top of the pass.

Chinook Pass has a reputation as a scenic byway, not an ultra-technical B-road. Speed limits are low, and even though it's a midweek morning there are plenty of RVs and rental cars ambling up the pass, sloth-like and distracted. Above the tree line, where the pines get short and stunted from long wind-whipped winters, the drop-off becomes extreme. This isn't the place to get the MX-5 bent out of shape to figure out how to reel it back in. 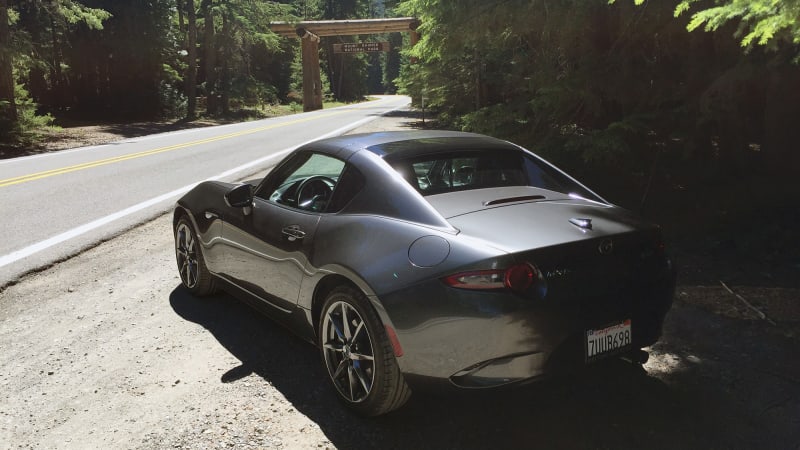 It also proves a point about the latest car's increased capabilities. The shifter's smooth as ever, and heel-toeing down as an RV looms ahead is satisfying. But I never have to work the RF as hard as I would a first- or second-generation car, and that takes some of the involvement out of the climb. I spend more time taking in the surroundings and less time strategizing about how to conserve momentum. That's progress, right? At times, roasting behind an extra lethargic family, I think this drive might be better in a rental Nissan Rogue. At least with no pretense of sportiness, the glacial pace wouldn't be so grating.

Like other NDs, the seats also give me trouble (they're the same as in the non-RFs, like the ones pictured below). Something about where my shoulder blades hit on the side bolsters makes them increasingly sore. Shifting, slouching, adjusting the backrest angle – nothing helps. Every body is different, but mine isn't that unusual. I'm 5'10" and fairly thin, and I feel too broad to be comfortable. By the time I'm heading down, I'm distractingly uncomfortable. I'd like to brush this off, but all I can say is that if you love the idea of this car, put in some real seat time before you sign on the dotted line. It's likely going to be difficult, or expensive, or both, to find an aftermarket alternative – and you'll almost certainly lose the side airbags.

But these issues aren't unique to the RF. Try as I could, I couldn't discern any issues specific to the RF, actually. It is heavier, the center of gravity is higher, but it's not immediately noticeable. If anything, the RF seems a bit more compliant, something we noticed on the first drive of the RF. Basically, these are imperceptible changes, unless perhaps you're setting lap times. But you wouldn't get a 113 lbs heavier RF for a track car, now, would you? 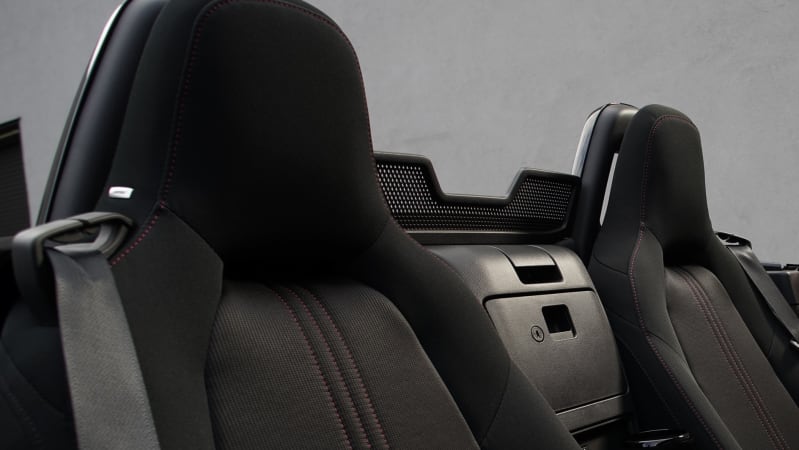 No, you'd probably get it for something like this. An escape from the hot lowlands, a way to see more of the ragged mountain range you're driving through, an easy vector for some top-of-the-nose sunburn. And when the snow falls, as it does thick and heavy on Chinook Pass from November through May, the RF's rigid top makes it far more livable than the regular MX-5's cloth number. Even so, roof-up we heard a lot of wind whistling through the rubber weatherstripping between the window and the top, which seemed to have worked itself a bit loose during normal operation. That might drive you crazy during a long, wet, grey, dark Pacific Northwest winter.

At the summit, Tipsoo Lake glitters like liquid crystal reflecting fire from Indian paintbrush growing along its shores. I've spent the way up, from the river valley into this alpine vista, analyzing the RF for flaws and strengths, trying not to be distracted when Rainier's glaciers hove into view. It's hot down lower, and there won't be a breeze like the one whipping the summit.

Sure, the RF has foibles, the seats prime among them. But in all other areas, for a relaxing but engaging cruise through some of the most gorgeous alpine terrain I've seen, it's hard to beat the airflow, the compliant suspension, the eager engine, and most of all that brilliant shifter. The folding roof's not as much of a compromise as I'd expected, and certainly it'll be a popular choice for place like Washington that face endless drizzly winters.

But winter's a long way off. Time to dip into some more cool forest shadow-pools before facing the heat.