James Riswick
Have your cake and eat it, too – that's supposed to be a fallacy. And yet, the 2018 Audi A5 Sportback defies conventional global wisdom by being more practical and better looking than the A4 sedan upon which it's based. Some may even prefer the way its longer wheelbase and roofline showcase the curves shared by the two-door A5. There's certainly no arguing about not being shoehorned into a coupe's back seat.

Compared to its siblings, both of which share a common platform, engines and interior design, the Sportback has virtually the same length, wheelbase and width as the A4, but has a lowered height that's an inch closer to the A5 coupe (54.6 inches versus 56.2 for A4 and 54.0 for A5). Now, you might expect a commensurate loss in headroom, but in fact the Sportback has more front headroom than the A4 (39.4 inches versus 38.9) and only 0.4 less in back. Indeed, someone 6-foot-3 can sit comfortably upright without hair being fussed, and there's still enough legroom.

And then there's the trunk lurking beneath its don't-call-it-a-hatchback. With 21.8 cubic feet of space with the back seats raised, the A5 Sportback falls only 2.4 cubes shy of the Audi A4 Allroad ... you know, a don't-call-it-a-wagon. Sure, the Sportback pales in terms of maximum volume (35 cubic feet versus 58.5), but it still offers far more versatility than the 13-cu.ft. A4 or 11.6-cu.ft. A5 coupe. 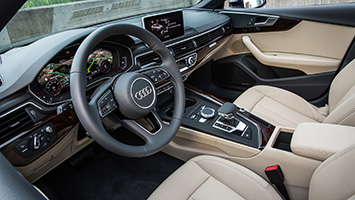 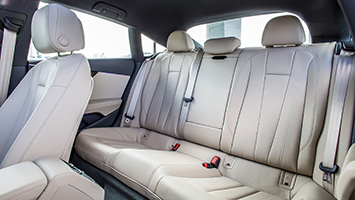 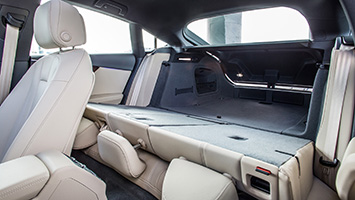 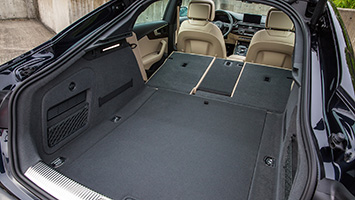 Right, so it's more practical. Then there's the beauty bit. The visual ties to the A5 are obvious, with the exaggerated character line following the car's voluptuous haunches and the Zeppelin-like hood strakes. According to designer Frank Lamberty, however, the difference and indeed the beauty is really in the roofline. He Photoshopped together a for-our-eyes-only image of what the Sportback would look like if they had simply added the A7's roofline and signature window graphic to the A4.

"It's not sexy," he said, noting that the resulting profile is too upright and plain. It would just be a more practical A4. Or as the Tamils might say, you'd have a mustache but not be able to drink the soup.
Instead, his team created an A5 where everything appears to be pulled back. Both because it literally is in terms of dimensions, but also through lines and details like the little trim piece and badge that bridge the front doors and fenders. The goal was to create a more rear-drive look, drawing attention towards the rear and away from the front overhang.

The result is certainly successful, as it's hard to fathom someone honestly preferring the more staid A4 — especially since that car looks almost indistinguishable from the car it replaces. It's easy to see many current A4 owners and lessees trading into a Sportback just to have something newer and more different than their car's actual successor. It may even prevent them from journeying on down to another dealership. 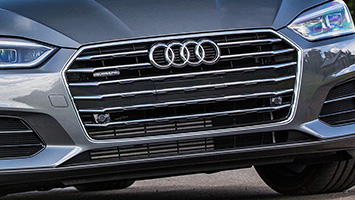 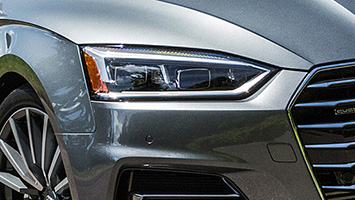 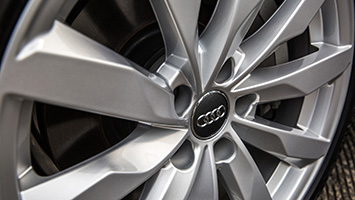 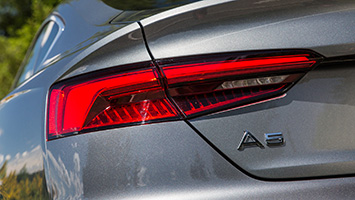 Well, at least in North America. You see, this isn't actually the first A5 Sportback. After the A7's success, Audi introduced an A5 version to Europe and elsewhere that followed the same playbook now used by the new 2018. Not only was it successful over there, but the introduction of various A7 copycats ranging from the BMW 4 Series Gran Coupe to the Chevy Malibu made bringing the second generation to North America an easy choice.

Now, to these eyes at least, the first generation was the better-looking car. Although its less-pronounced character lines and non-Zeppelined hood make it a bit harder to tell apart from an A4, it's less fussy and ultimately prettier. The same could be said for the new A5 coupe and Cabriolet. The A5 also can't match the A7's lower, longer and wider proportions that continue to make it a stunner after all these years.
Beyond aesthetics, however, the A5 Sportback is just as new and improved as the rest of its various platform mates. It too comes standard with Audi's latest 2.0-liter turbocharged four-cylinder pumped up to produce 252 horsepower and 273 pound-feet of torque. The difference in thrust compared to the A4/A5's outgoing 220-hp motor is palpable, while the EPA fuel economy estimates of 24 mpg city, 34 mpg highway and 27 mpg combined effectively represent a 3 mpg improvement. Cakes, eating them, etc.

Unfortunately, those improvements do come with the tradeoff of a seven-speed dual-clutch automated manual that lacks the old ZF eight-speed automatic's buttery smooth shifts and immediate responsiveness off the line. And, unlike the A4 and A5 Coupe (but like the 4 Series Grand Coupe), there is no manual available. 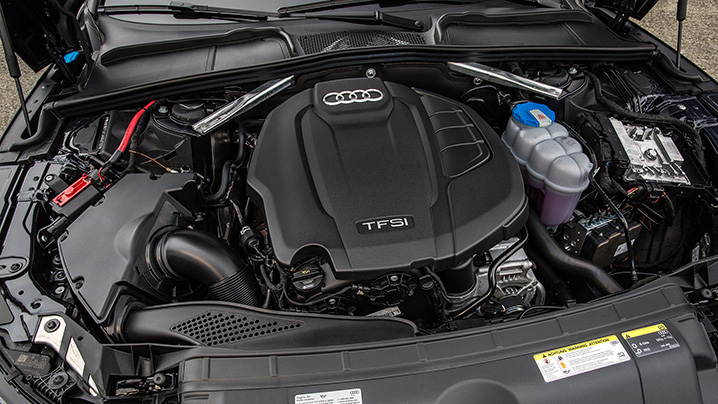 The eight-speed auto is at least still showing up for duty in the 2018 Audi S5 Sportback, which boasts a 3.0-liter turbocharged V6 good for 354 horsepower and 369 pound-feet of torque. Audi says it'll hit 60 mph in 4.5 seconds (versus the A5's 5.7), and it's easy to believe. It's the version we spent more time driving during the press launch in Seattle, and it's the version we'd also more than happily scrounge under couch cushions for the extra $12,000 needed to step up to its $55,375 asking price. Besides the transmission and its obviously superior acceleration, there's just something about six cylinders pumping away under hood that continues to beguile. A sweet snarl from the exhaust helps too, which actually changes based on your selected drive mode.

Of course, the S5 comes with a firmer ride even in its Comfort setting. It's never harsh per se, and sticking with the standard 18-inch wheels would help, but the various potholes around Seattle highlighted that this is still a performance-oriented car. And, true to form, so does the way it stays resolutely planted through high-speed sweepers despite a predictable Pacific Northwest drizzle. Sticky summer tires help, of course, but both the A5 and S5 feature Quattro all-wheel drive without the new Ultra system (which decouples the rear for better fuel economy) found on the A4 and Allroad. This Quattro version runs a standard 40:60 torque split that can be varied by as much as 70:30 or 15:85, along with a torque vectoring system at the rear that shunts power left and right depending on driving and traction conditions.

The result is a car with truly striking capabilities around corners, as is to a lesser degree the A5. Like the rest of its family, however, there's just not enough feedback or engagement present to really make you yearn for another go. You walk away impressed, not inspired. The steering is the main culprit, for even as Audi has made its effort more linear and consistent over the years, it's still too isolated. Changing driving modes doesn't make much of a difference, either. 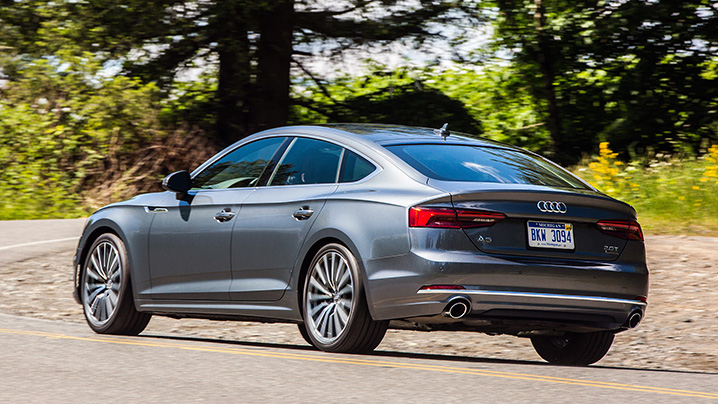 That ultimately puts the A5/S5 in more of a grand touring realm, which is really just fine, given how lovely the Sportback's cabin is to spend time. Sharing 100 percent of its design with all other A4s and A5s, the look is fresh, modern and functional. All the latest toys in Audi's tech playground are available as well, including the available Virtual Cockpit that gets a Sport mode gauge display in the S5 (as other S variants do) on top of the standard Classic and Infotainment layouts.

Other differences between the A5 and S5 include a flat-bottom wheel, special brushed aluminum or carbon fiber trim inlays, and sport seats covered in diamond-quilted Alcantara or full leather upholstery. They seemed to be mounted a little lower, granting a little extra legroom and a more hunkered down, racier driving position. The standard A5 seats are available as an option should you desire seat ventilation.

Finally, there's the matter of price. All of the coupe/sedan models on the market command a premium over their sedan siblings. Usually, it's a huge one as the A7 costs about $10,000 more than a comparable A6. The Mercedes CLS is about the same. Thankfully, the A5 Sportback's premium is similar to the 4 Series Gran Coupe's, coming in at about $3,000 more than a comparable A4 (the Sportback comes standard with an automatic, Quattro and the full-bore 2.0-liter turbo-four, which the A4 does not). Frankly, that doesn't seem like a bad price to pay for the both cake, and the pleasure of eating it.