We go off-road in the passenger seat of the new Mercedes pickup.

Cornering at 60 miles per hour in the passenger seat of the new Mercedes-Benz X-Class midsize pickup, it's poise and agility impress. Following its global unveil in South Africa on Tuesday night, we're given an early ride-along the next day on a private race track and serious off-road circuit. Clearly, Mercedes wants to prove its first-ever pickup is as adept at tackling terrain as it is smart-looking.

Mercedes claims it's the first pickup from a premium car manufacturer ( Lincoln and Cadillac might disagree). The basic ladder-frame chassis is based on the Nissan Navara, but Mercedes has made significant changes to improve the X-Class' ride and handling, including a wider track, better dampers, and disc brakes on all four wheels. On-road, in rear-wheel drive, the body remains remarkably flat and passengers unruffled through tight turns. It feels almost as good as a well-sorted SUV despite its 210-inch length and unladen rear.

The start of the off-road route, covered in loose stones and dry mud, calls for four-wheel drive, enabled on the move via a knob on the console. The middle-of-the-range X250's 2.3-liter diesel, mated to a six-speed manual, puts its 190 horsepower to the ground well with an audible roar, but the sound doesn't encroach too much into the well-insulated cabin. More surprising is how fast the truck feels – official figures include a 0-62 mile-per-hour time of 10.9 seconds and a 114-mph top speed – and how fast the driver feels comfortable driving over such uneven terrain. Even when a wheel catches a deep rut or rock, the X-Class's well-resolved setup masks the impact inside the cabin brilliantly. 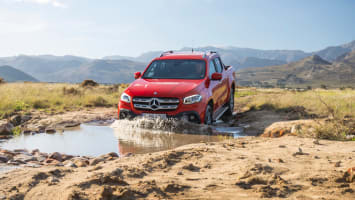 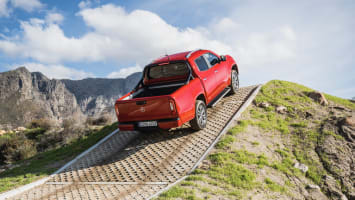 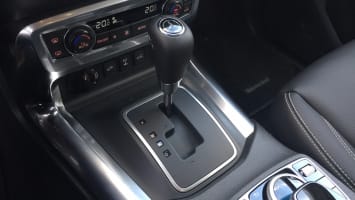 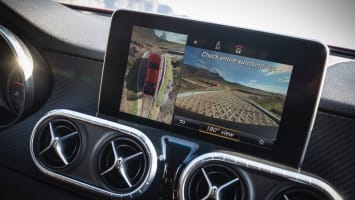 The X-Class can do proper off-road too. After stopping to select low-ratio four-wheel drive, the truck takes on super steep inclines, stopping and starting halfway up easily with Hill Start Assist. It's as relaxed down the other side courtesy of Mercedes' simply named Downhill Speed Regulation. A 100-percent differential lock for the rear axle is optional. These extreme-angle off-road maneuvers are made easier using the X-Class' 360-degree camera view. When the only view through the windshield is of the sky, an extra camera mounted under the radiator grille helps the driver see the ground via the 8.4-inch infotainment screen.

Wading through a deepish stream was no problem – official fording depth is almost two feet – nor were steep pitches. We experienced two 40-degree tilt maneuvers, and Mercedes says it can tackle up to 49.8 degrees.

Interior space is good, and six-footers can sit one behind the other happily. A higher 'stepped' ceiling in the rear ensures decent headroom. The sliding rear center window behind the rear passenger's head can be operated electronically from the driver's seat. The load bed beyond that is 62.5 by 61.4 inches, good for a Euro pallet or 17 50-liter beer barrels.

The bad news for US customers is that despite occasional rumors speculating otherwise, Mercedes says it has "no plans" to offer this midsize pickup in the States. The automaker cites the dominance of fullsize pickups and domestic players for this choice, viewing Latin America, Oceania, Europe, and South Africa as more attractive markets. Perhaps those markets are less price-sensitive to midsize pickups, too. The X-Class will cost from $43,000 (€37,294) in Germany from its November 2017 launch, but that's only for the stripped-out workhorse Pure trim. The likely bestsellers will be Progressive trim, aimed at customers using the vehicle as much for leisure as work, and Power trim, for private individuals unlikely to go far off-road, preferring to keep their leather seats and contrast stitching clean. Both of those models will likely cost into the mid-$50,000s. 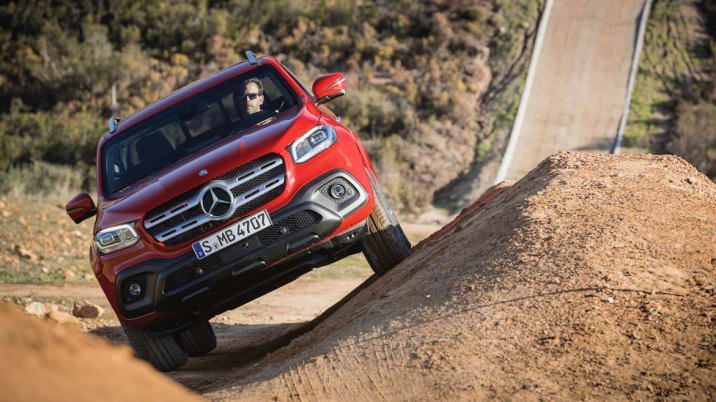 Despite those prices, some cabin finishes are disappointing. Pure trim has too many dark plastics from dash to doors, and no amount of jet-engine-inspired air vents or concave wood filet can mask the 'orange-peel' hard plastic finish of the lower dashboard directly below, even in top Power trim. The auto gear shifter and surround looks low-rent and out of place in a 2017 Mercedes interior, too.

The X-Class range starts with the X220d, powered by a 163-horsepower, 2.3-liter four-cylinder turbo-diesel with a six-speed manual gearbox and rear-wheel drive with engage-able four-wheel drive. Next up is the X250d, with a biturbocharged, 190-hp version of the same unit, available with a manual or seven-speed automatic transmission. A small 166-hp, gasoline powered X200 will be limited to a few specific markets including the Middle East, while a 258-hp X350d with a diesel V6 and permanent four-wheel drive won't arrive until mid-2018.

This is not a line-up with the US in mind, and unless Mercedes wants to find space in one of its (or Nissan's) North American plants, import truck taxes would further hamper sales prospects. Which is a shame, as the X-Class is a seriously capable on- and off-road truck only let down by a few interior finishes, surely solvable at a facelift stage. Meanwhile, US buyers seeking an upscale pickup will have to look to the top versions of mainstream brands.