A look at cars of legend and bad luck.

SPEEDWAY, IN – My knowledge of the Indianapolis 500 ranges somewhere on the scale between famed Indy racing historian Donald Davidson and a brick.

I've been enamored with the 500 since I was a kid, covered the race in the 1970s and '80s when I worked as a sportswriter in the Midwest, and I've gone back yearly since the mid-2000s. This will be my 22nd Indianapolis 500, and the sight of the place and the cars never gets old.

What really revs me up are the cars I grew up with in the 1960s and '70s, and that's what made this weekend so special at the speedway. Beyond Gasoline Alley, where all 33 of the spec Dallara chassis in this year's race look pretty much alike, was a display of about 80 old Indy cars that serve as a history lesson from an era when designers had a free hand and boldly used it.

Some of those cars are legends at Indy, and others are proof that great plans sometimes are undermined by bad luck. There are examples of conquest and also of futility, but there's a cool history behind them all.

Here are a few: 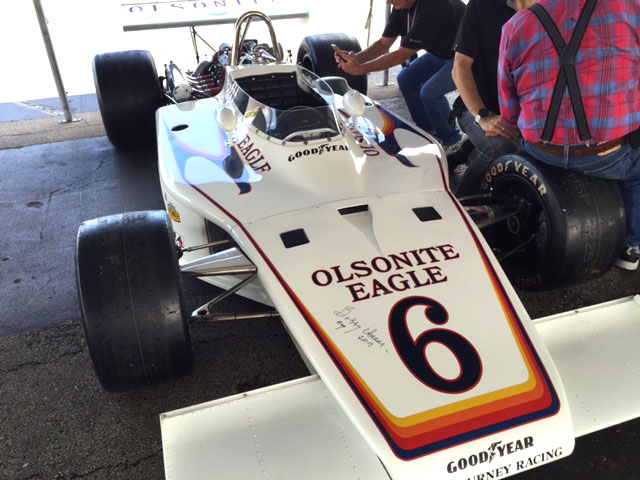 When I walked upon a white 1972 AAR Olsonite Eagle, there not only was a historic story in that car but a great storyteller as well. Three-time Indy winner Bobby Unser drove a sister Eagle to the pole position in 1972. (This one, chassis No. 7201, was a backup at Indy, its handlers said.) This was an era when cars sprouted huge wings and speeds soared. Unser's record qualifying speed of nearly 196 mph was nearly 18 mph faster than the track record set the previous year.

I was so enamored with seeing the car that I didn't immediately notice Unser sitting on the left front wheel. So I opened my ears, asked a couple of questions and heard some great stories. 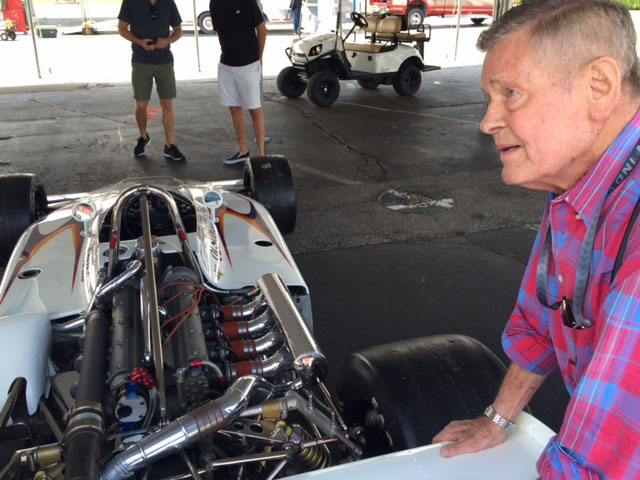 Unser told of "secrets" the team used to gain amazing stability at high speeds. One of the best was the "Gurney" flap, a thin spoiler attached across the trailing edge of the car's wings.

"Guys from the other teams would ask what that thing was, and we'd tell them it was to strengthen the wing," Unser said. "And they'd say, 'Oh, OK,' and walk away. They believed it!" 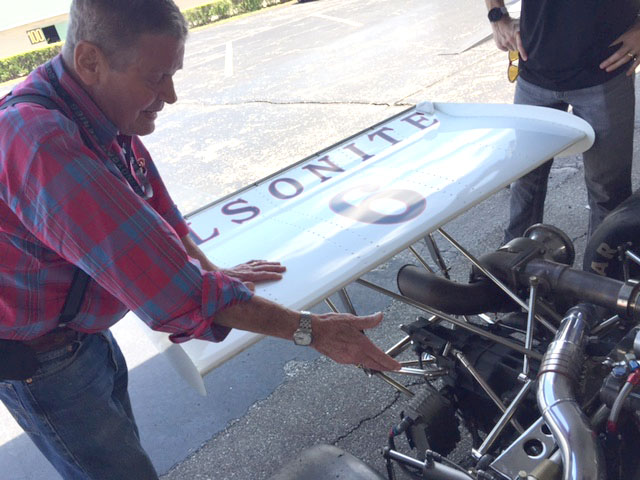 I told Unser that the Eagle was such a departure from the cars today with their massive body kits.

"These cars today look like something that went to the moon and didn't come back!" he said, laughing. 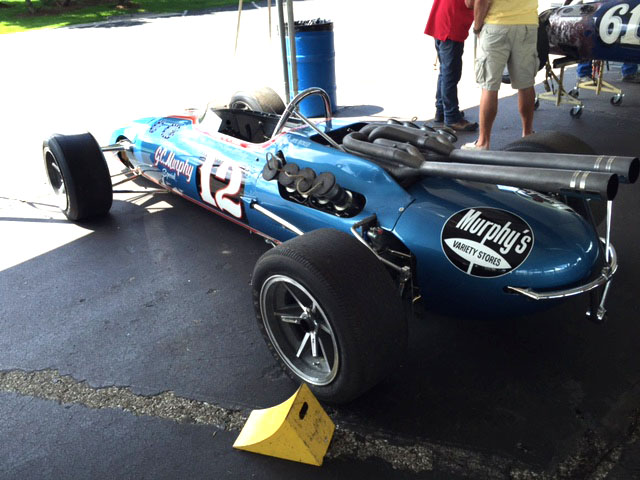 A few feet away, an Indianapolis race car enthusiast named Bob Donahue looked over his two cars from a prior era – the non-winged, rear-engine age of the 1960s. Donahue calls himself a "hunter and a gatherer" of cars and parts, who sends them off to the experts for restoration.

One is a meticulously restored 1967 Eagle with its distinctive nose that actually looks like an eagle's beak. Donahue said Roger McCluskey drove the car in 1967 when it was owned by Lindsey Hopkins, followed by Wally Dallenbach, Mel Kenyon, and Jim McElreath in later years. Donahue said the car sprouted sidepods and aerodynamic touches in 1970, and it raced as late as 1972.

A previous owner had the car painted "Coyote Orange," the color of many cars raced by A.J. Foyt.

"It was Coyote Orange, which is really Ford Poppy Red," said Donahue, who had the car restored to its original blue after he bought it. 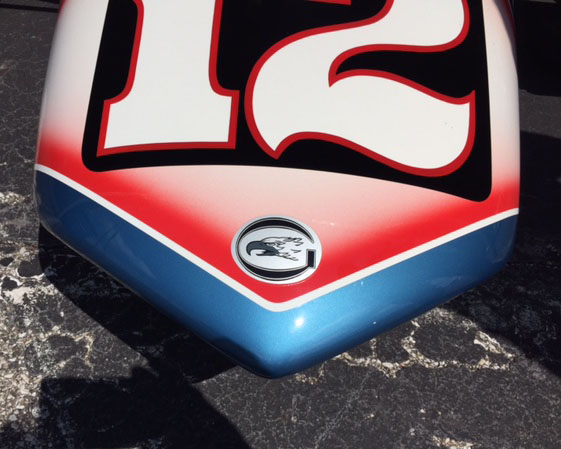 1969 COYOTE
Donahue's other car is an unrestored 1969 Coyote chassis which, the owner said, Foyt drove to the pole position in 1969. The only way it moves today is on rollers. The car had been crashed in its later years and, although Donahue has repaired the damage, it's a rough example of what time does to old cars. And yet it's beautiful.

And if you look into the barren cockpit, you see why drivers of that era truly were men of huge courage. The cockpit essentially was space with a seat, steering wheel and pedals between two fuel tanks that ran the length of the car – holding 80 gallons in total.

"This thing was a gas tank on wheels," Donahue said. "You're literally surrounded by fuel." 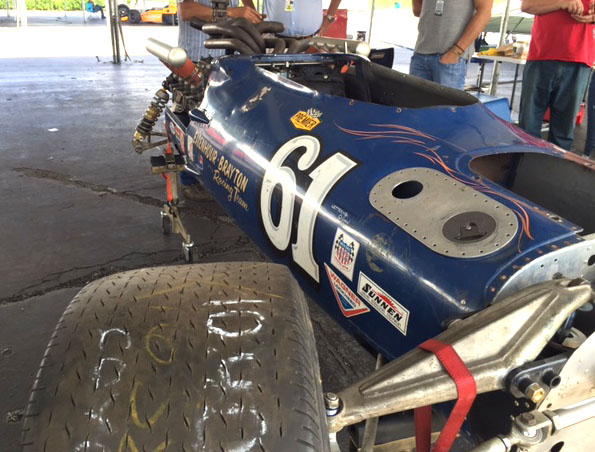 1969 FOUR-WHEEL-DRIVE PARNELLI
A few yards away, Cleveland enthusiast Doug Winslow helped load a sleek blue, white and orange car into its trailer. It was a 1969 Vels Parnelli Jones Indy car that was designed after the wedge-shaped Lotus STP turbine cars of the previous year.

This car was an imitation in looks - and an innovation in mechanics. It's a four-wheel-drive car with inboard brakes and a turbocharged four-cam Ford engine that's mounted backwards. All four tires are the same size, unlike rear-wheel-drive cars with rears larger than the fronts.

In the cockpit, the driver must pull the gear shift backwards for first and third gears, forward for second and fourth. 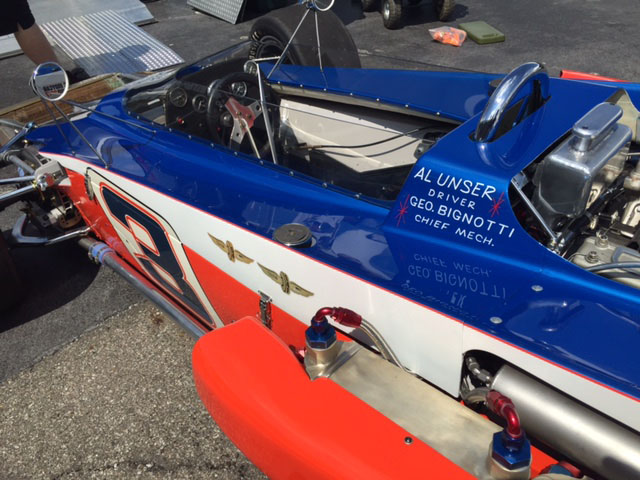 Its history is as unique as its design.

Al Unser Sr. drove the car to impressive speeds early in practice in 1969. But Unser broke his leg while riding a motorcycle in the infield at the speedway and couldn't race in the 500. Winslow said Parnelli Jones put other drivers into the car, but nobody could get it up to qualifying speed. It never raced at Indy.

Winslow bought it several years ago, "and it was filthy." He had it restored and has put it on the track three times at vintage events – last year at Indianapolis and Pocono, and this weekend at Indy – which may be more than it has raced.

"I did a little research and found at least one time when they ran this car (in a race)," Winslow said. 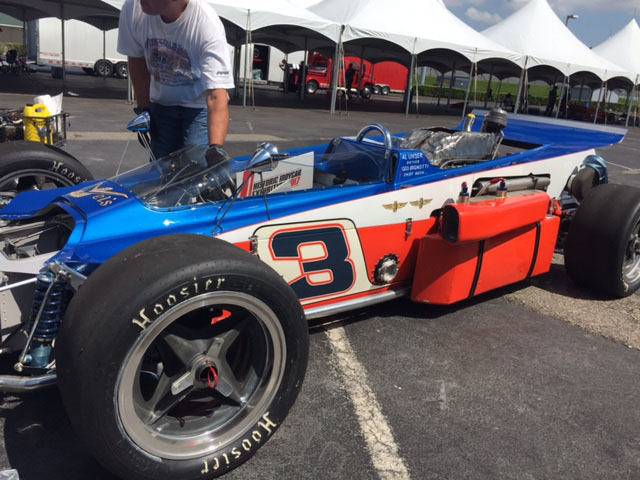 Winslow said Unser has seen the car in its restored state but offered little reaction.

"Maybe he doesn't have good memories of that car," Winslow said.

What matters, though, is that Winslow and others with these cars have preserved an important part of history. And they've blessed us with their willingness to put them back on the track.