Why not just make the S faster? For starters, this is much better. The man in charge of Porsche's rear-engine sports car says the 911 S may not be long for this world, and we have this car to thank. The GTS model, which is a collection of popular equipment on top of a 911 S, has proven, well, popular. If the GTS does even better this time around, the S may be deemed unnecessary. Maybe. We'll see.

The third rung up the growing 991.2 911 ladder, the GTS is again available as a Carrera coupe or convertible with rear- or all-wheel drive, as well as in the all-wheel-drive-only Targa body style. All versions get the wider rear bodywork normally reserved for all-wheel-drive 911s. That means they all have the same wider track and, perhaps more important, they look the business. Technically speaking, of course.

To paraphrase Rob Reiner in This Is Spinal Tap, why not just make the S faster? Well, that's basically what the GTS is: a more powerful S with a lot of the spendy options people normally put on an S baked in from the start. And it's cheaper (relatively speaking for a $120K car) in this package than if you ordered an S a la carte; it's the same way with Porsche's other GTS models. What's different this time around is that the GTS model is arriving early in the cycle, just after the 911's 2017 refresh, which brought turbos to the base cars. Previous GTS 911s have shown up toward the end of a generation (997) or half-generation (991.1). 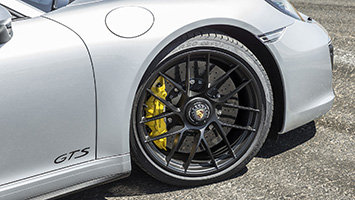 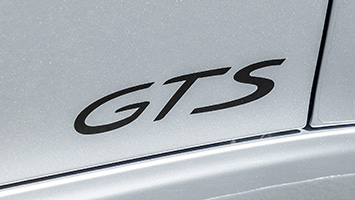 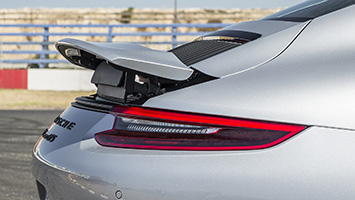 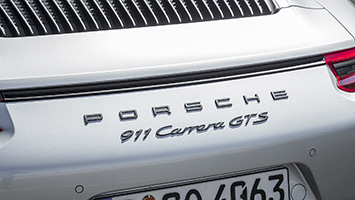 August Achleitner, head of the 911 line, says the change was made because about half of Carrera models ordered before the 991 refresh said GTS on the back. That's a lot. And if they're available for more of the product's life, the result should be more GTS sales, which means higher transaction prices. Which equals profit. So that's the why; now for the what. 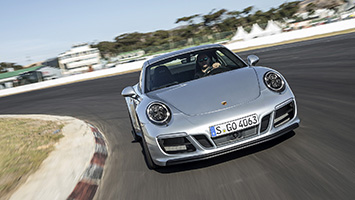 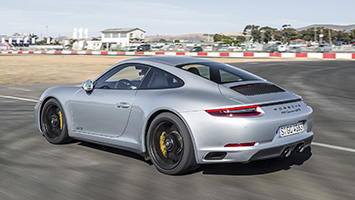 The Targa 4 GTS is the first modern 911 to come with a black Targa bar; you can switch it back to silver if, like us, you prefer the classic look. The standard Sport exhaust system has black tips. The headlight sprayer nozzles are matte black, and the headlights themselves get bezels that could be "none more black" in the words of Nigel Tufnel. Even the badges on the rear get the blackout treatment. The interior receives a similar blackening with standard and available Alcantara pieces. It's all just a bit sinister.

Not surprisingly, the latest GTS drives a lot like a 991.2 911 S. That means it's very quick, the engine sounds great (despite the turbochargers muffling things a bit), the response is incredibly linear (despite those turbochargers again), and the steering feedback is good but still not old-Porsche great. To enhance the experience, it includes a standard Sport exhaust with GTS-specific tuning for the exhaust flaps as well as "partially omitted sound insulation," which makes it seem as though the guys on the factory line put half of it in and changed their minds. Whatever the circumstances were, it's that extra bit of raw we like, and it manages to avoid sounding synthesized. 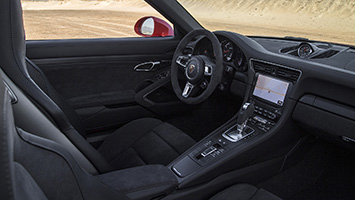 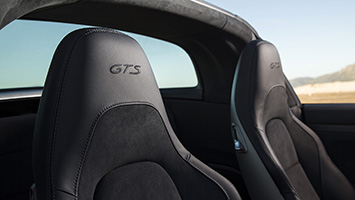 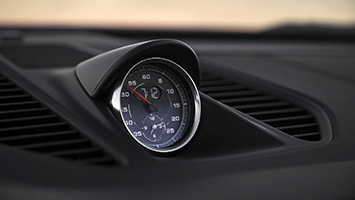 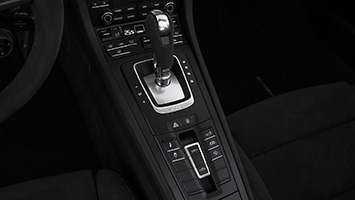 If you like, you can get the GTS with crazy ultra-high-performance tires, available from the dealer. They can be mounted to any current 911 20-inch wheels with 245/35 fronts and 305/30s in the rear. And yes, they're plenty grippy on a track. Porsche claims the optional rubber cuts a not-insignificant four seconds from the GTS's 7:26 Nürburgring lap time. More historical comparison: That makes it six seconds quicker than the Porsche Carrera GT. P-cars – and their tires – have come a long way in a little over a decade.

The various GTS models drive big on a tight road (because they are), less so on a track with a little more room and speed. The cars feel equally comfortable in either setting, which is sort of the 911 MO. It's all that extra little bit better than a 911 S, and as usual opting for the GTS makes sense if you were going to add Sport Chrono, Sport Seats Plus, the Sport Exhaust, and those center-lock 20-inch wheels anyway. And if you like the modified looks.

Given that Porsche has only added 911 models in recent years, and not removed any, we doubt the 911 S is actually going anywhere. But expect to see an even larger share of GTS models on the road. And the good news is that the S badge won't die off – it'll just be preceded by G and T.