Crash splits car right down the middle, but driver survives

Greg Rasa
An accident on Highway 101 in California literally split a car down the middle, leaving the driver still seated behind the wheel - injured, but, incredibly, alive.

"The scene was, it was pretty intense," Sgt. Jason Bahlman told the Santa Rosa Press Democrat. Bahlman has been a trooper for 16 years. "It was definitely one of the most severely damaged cars I've ever seen."

Former Air Force ambulance driver Tom Bond witnessed the crash and videotaped the aftermath. What he saw after the collision happened and the air cleared of smoke and debris was "the craziest thing I've ever seen, and I've seen many accidents." 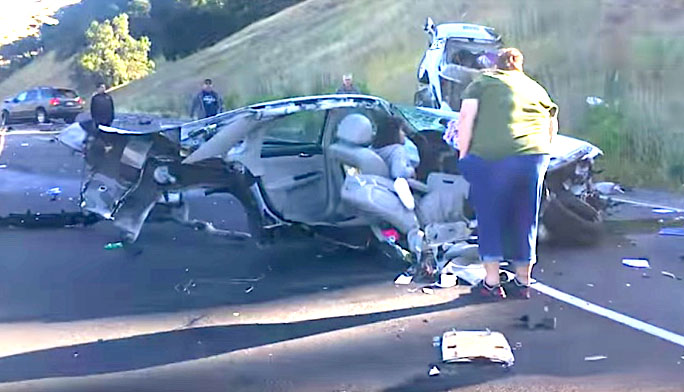 According to the CHP, Apol Lansang, 26, of Sonoma, was driving her Chevy Impala south on Highway 101 around 8 a.m. Saturday when a northbound Toyota Sequoia driven by Kevin Fenty, 27, of Huntington Beach, crossed the center line and struck the Impala head-on on the passenger side, sending that half of the car into an embankment and leaving the driver's half sitting on the roadway with Lansang in it.

She had only minor injuries. Fenty was ejected from the Sequioa, and yet he also had only moderate injuries, CHP said.

Bond's video shows passengers of other cars approaching the wreckage to help the injured.

"I was shaken," he told the Press Democrat. "I mean, my family is still shaken. I drive that stretch every single day. It is so dangerous."