Same engine and transmission, but lots else is new. The refreshed and facelifted 2018 Subaru Outback was revealed today, just ahead of its debut next week at the 2017 New York Auto Show. While not all new, the Outback gets a more aggressive appearance, improved ride and handling, and some new standard and optional equipment. Pricing hasn't been announced, but the 2018 Outback will go on sale sometime later this year.

While there haven't been many changes to the overall body, the Outback's front and rear fascias have been updated to fall in line with the rest of Subaru's lineup. The C-shaped headlights and wide grille recall the new 2018 Subaru Crosstrek. According to Subaru, the shape is supposed to remind you of the boxer engine design, with the lights moving outward from the grille. The LED headlights are available with a feature that points them in the direction of the steering wheel. Limited and Touring models come with automatic high beams courtesy of Subaru's EyeSight safety suite.

New cladding on the front is intended to better protect the body from dirt and rocks when soft-roading. There will be new wheel designs across the entire Outback range. 2.5i base and Premium models come with 17-inch wheels, while Limited and Touring models come with 18-inch wheels. All models except the range-topping Touring come with roof rails with retractable crossbars. The Touring comes with low-profile rails and detachable crossbars.

Subaru claims improvements to the Outback's chassis and suspension provide a smoother, quieter ride than the current model. The brakes and the electronic power steering have also been retuned for a more linear response. Improvements to the CVT, the door mirrors, side glass, and wheel wells should help quell some road noise. 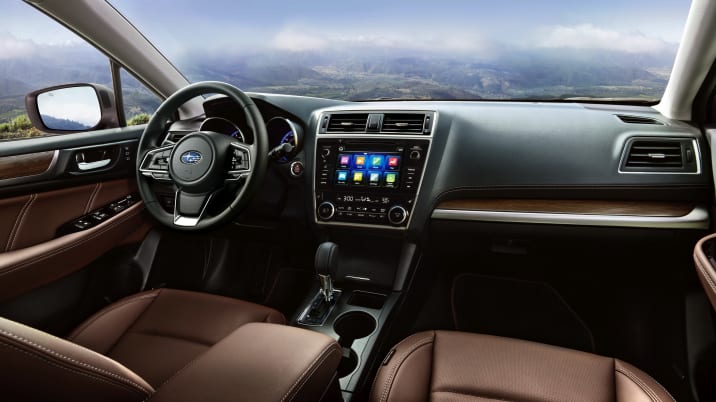 There have been upgrades to the interior, including a redesigned center console. Backseat passengers now have access to two USB ports. New materials and colors will be available for both the seating surfaces and trim pieces. Subaru also says an improved air conditioning system will cool the cabin more quickly than before.

The 2018 Outback gets the latest version of Subaru's Starlink infotainment system. That means Bluetooth phone and audio, Apple CarPlay, Android Auto, and a TomTom navigation system with three years of map updates in the top level models. The standard touchscreen is 6.5 inches, while an 8-inch system is an available option. Premium, Limited, and Touring models get over-the-air WiFi updates.

Subaru's EyeSight safety suite is available on most models, standard on the Touring trim. In addition to automatic high beams, the system comes with adaptive cruise control, automatic emergency braking, lane departure warnings, lane-keep assist, and blindspot monitoring with rear cross-traffic alert. All Outbacks now come with a rear-view camera. The improved tire-pressure monitors can now detect changes at individual tires, providing a better peace of mind for those who take their Outbacks off-road.

While the Outback gets numerous updates to the styling, tech, and NVH, the high-riding wagon soldiers on with the same two engines and transmissions as before. A 2.5-liter boxer four-cylinder makes 175 horsepower and 174 pound-feet of torque while a 3.6-liter boxer six makes 256 hp and 247 lb-ft of torque. Both engines are paired with CVTs and, as always, power is sent to all four wheels.

Pricing hasn't been announced, but don't expect it to change very much from the 2017 model. The revised 2018 Subaru Outback goes on sale later this year.