It's a new season in the timeline of the Chevrolet Equinox, and the all-new 2018 model is a spring forward for the popular American crossover. (This is the first week of Spring, remember?) In addition to refreshed looks that tie the Equinox aesthetically to its brandmates, plus a number of safety and technology updates, the Equinox is taking a big breath of fresh air with a trio of turbocharged engines under the hood. The first version to hit dealerships sports the smallest-displacement motor – a 1.5-liter turbo four – and we headed to the Carolinas to give it a good twice-over in the scenic Blue Ridge Mountains between Greenville and Asheville.

As well as a new set of powerplants, the updated Equinox gets an aerodynamic makeover and sheds an impressive 400 pounds of weight for the new generation. The 1.5-liter Equinox, which includes engine stop-start, nets fuel economy figures of 26 mpg city and 32 highway for the front-wheel-drive model, while adding all-wheel drive subtracts just two mpg across the board. For reference, the outgoing 2.4-liter 2017 Equinox was rated at 21 city/31 highway mpg for the FWD model, and 20 city/28 highway with AWD. 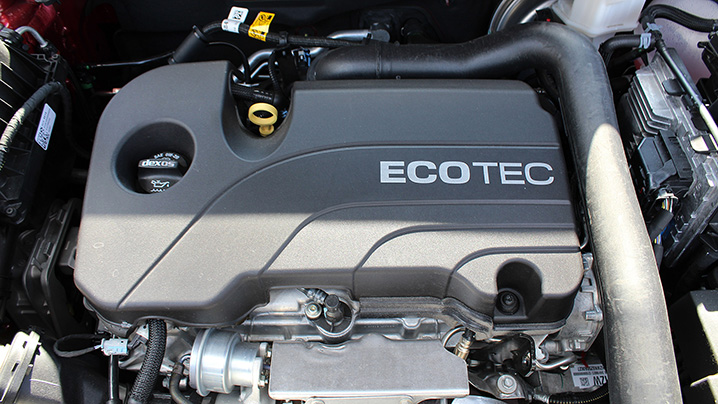 The interior is about what you'd expect from a Chevy crossover, with materials skewing more towards robust than refined, and with controls and instrumentation maintaining a fair share of analog simplicity. We drove a variety of models, including an LT trim with the uniformly bleak "Jet Black" interior. Your goth teen probably won't have much interest in your new CUV (unless they're learning to drive), but this dark-like-my-soul interior should at least make them feel at home, so long as you keep the available panoramic sunroof shut. We found that a splash of contrast on the dash and door trim makes an enormous difference in elevating the interior mood; the optional denim-style seat fabric in another LT was actually pretty crisp and attractive, with an embossed pattern to give it a little texture.

The seats in the LT are firm and supportive, though the side bolstering on the seatback might feel a little tight for a good number of drivers. Still, you won't be fighting to maintain a proper upright position directly behind the wheel when traversing tight corners. We preferred the extra bit of coziness the Premier trim's leather seats afforded. 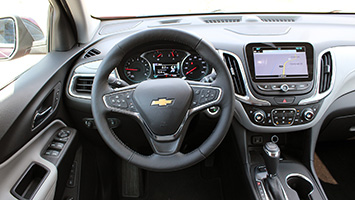 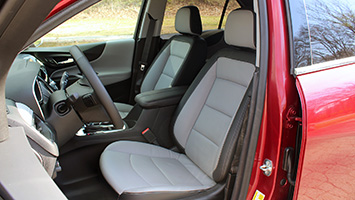 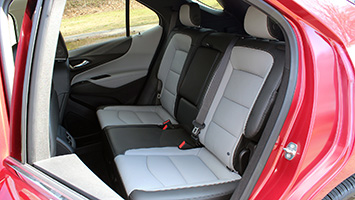 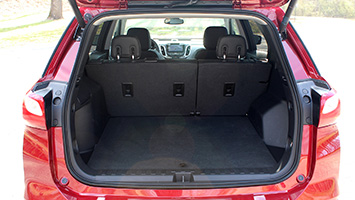 Despite its smaller exterior dimensions compared to the outgoing model – it shrinks 5.2 inches in the wheelbase, 4.7 inches overall – the Equinox is still amply spacious. Rear seats are roomy, with plenty of leg space to sit behind a comfortable driver's position. There's a decent amount of room for a few bags behind the second row (at 29.9 cubic feet), but the "kneeling" seats fold flat to unlock a voluminous and practical space (totaling 63.5 cubic feet) for those times when you need to haul more than just groceries or luggage.

If you don't need to tow anything, the 1.5-liter turbo engine is potent enough for this car. Down 12 horsepower from the outgoing 2.4-liter I4, the new motor offers 31 more pound-feet of torque, which makes itself available low in the rev range. Tied to the six-speed automatic transmission, this base-motor Equinox was perfectly up to the task of accelerating up the nearly endless series of hills on our meandering drive route between Greenville, SC, and Asheville, NC. The sound is also both reasonably quiet and reasonably satisfying, not some whiny little hair dryer under the hood.

Our first driving stint was in the front-drive LT trim, which is expected to be the volume model. In addition to being pleasantly surprised by the capability of the powertrain, we found the car to be well poised on the undulating and twisting roads through the mountains. The Equinox LT is balanced in the turns, and the ride is pliant. The chassis felt stable and upright as weight transferred side to side and front to rear repeatedly over many beautiful miles. The LT comes with 17-inch wheels and rubber with big sidewalls, which complained audibly as they struggled for lateral grip. While the feeling of control through the steering wheel is sufficient, there isn't a lot of physical feedback from up front. With no sensible reason to test the limits of an Equinox in the Carolina hills, we drove it more or less how any owner would, and found it a pleasant partner. 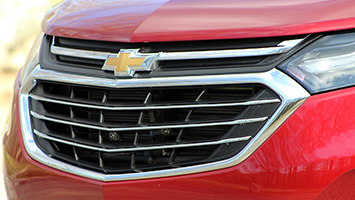 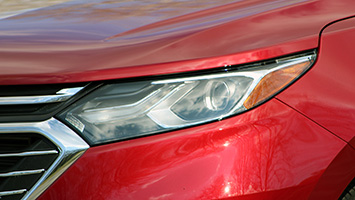 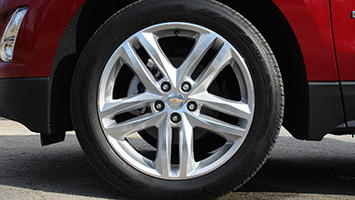 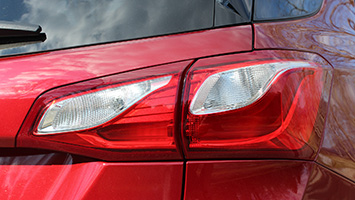 The view is good – commanding, even – from behind the wheel, with a low dash and the front end disappearing from sight. It's great in most driving, but makes tight maneuvers in parking lots a little less precise when you can't visually place the front corners. The standard rearview camera is helpful, but the available Surround Vision system on the Premier trim makes life even easier, providing an overhead view stitched together from four cameras. The new Equinox offers Apple CarPlay and Android Auto, which was especially useful navigating our own drive route through the Carolinas in an otherwise nav-less LT test vehicle. For the frugal, it means buyers can happily forgo the onboard navigation if they don't mind plugging their phone in and projecting it onto the central display.

We later got behind the wheel of the well equipped Equinox AWD Premier and headed for the hills once again. Now, it's hard to be certain, as we didn't use any precision instrumentation in our testing, but it felt as though the added weight and complexity over the FWD LT made this more expensive version just a tad more sluggish accelerating from a stop. Still, even as the earlier LT tester was a fine driving companion, the AWD Premier was definitely the trustier hoss.

Eighteen-inch wheels are standard on the Premier trim, but the version we drove came equipped with the optional 19-inchers. These bigger shoes made a heck of a difference in the twisty roads, providing a lot better front grip and overall obedience to our demands in the curves. Definitely consider the upgrade if that's the terrain you live with day to day. Tying a series of corners together was a smoother task, and it was easier to carry a comfortable speed downhill through tightening corners on those narrow roads on the border of the Carolinas. From what we could tell, there was no sacrifice in the comfort of the ride on the 19-inch wheels compared to the 17s of the LT. 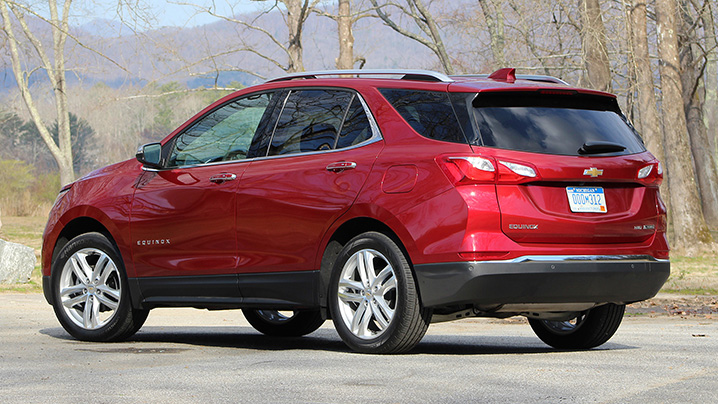 As for the selectable all-wheel drive, it didn't make for much of a practical difference on the dry, paved roads we encountered. It might have been a placebo effect, but it felt as though the Equinox got just a little more cooperative sawing through the corners with AWD engaged. The added peace of mind for those of us who endure the northern winters is a plus, too. Got a straight, dry stretch of highway ahead of you? Just disengage the AWD with the push of a button to maximize your mileage between fill-ups.

Other available features on the all-new Equinox are designed to make your life safer and easier. Depending on the trim level, it can be equipped with 4G LTE Wi-Fi, ventilated front seats, heated rear seats, and a hands-free gesture (kick to open) liftgate. Available safety features include lane-keep assist, blind-spot monitoring, low-speed automatic braking, and forward-collision warning with the vibrating seat alert. We found that last one to be noninvasive under the right settings, with lights on the top of the dash and a nudge in the seat serving as an ample alert to slow down without creating a panic for you or your passengers. Also standard is the Teen Driver system, which allows you to limit distractions, keep safety systems on, and get a driving report to help reinforce good driving habits (or revoke privileges, you tyrant).

The Equinox promises to continue to be a popular vehicle, and owners are sure to be pleased with the 2018 model. We were with the overall package, and it should compete well in this segment against cars like the Toyota RAV4 and Honda CR-V. If the 1.5-liter turbo just won't cut it for you, this summer Chevy is adding a 2.0-liter turbo to the lineup – mated to a nine-speed automatic transmission – to replace the outgoing V6, and the introduction of a 40-mpg-highway, 1.6-liter turbodiesel has our interest piqued. Come fall of 2017, the LT trim level will get the optional Redline treatment for those owners who want to visually stand apart from what are sure to be a veritable crowd of other new-gen Equinoxes on the road in the coming months. Chevy tells us to expect more Equinox news (and ad campaigns) in the near future. 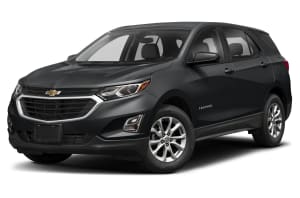