There's something to be said for using the right tool for the job. It's not always possible, but you know that when you whip out the Vise Grips, deep down inside, it just feels wrong. There's satisfaction, joy, even dignity in using the proper instrument to execute a task accurately on the first try.

Our attempt to wield the updated 2017 Subaru BRZ on Fuji Speedway last year were stymied by summer fog that rolled into the base of Mt. Fuji, reducing visibility to just a couple of car lengths. But it's an extremely fast circuit with a nearly mile-long front straight so even on a clear day, it's not the ideal venue for the BRZ.

Which is why we accepted Subaru's invitation to take another go at it, this time at Circuito Guadix, an off-the-beaten-path track near Granada, Spain. (If you go, try the paella.) 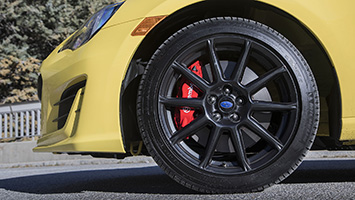 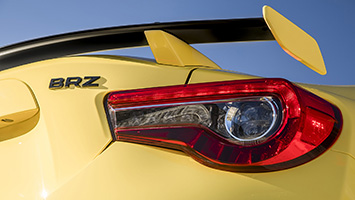 The Performance Package is the highest spec available on the chassis to date in the US, and that includes its Toyota and Scion brethren. The setup is exclusive to the BRZ line and has no Toyota counterpart. With a price of $1,195 on top of (and only available on) the $28,465 Limited trim level with a manual, it gets you a host of upgrades to its unsprung components, all of which would cost several times more if procured piecemeal in the aftermarket. Sorry, there are no power upgrades, save for the bump of five horsepower and five pound-feet of torque on manual-transmission 2017 models.

The most noticeable of the enhancements are sharp, gunmetal-finish 17-by-7.5-inch wheels, inspired by the famed RS-Watanabe design that adorned Japanese touring racers of the 1970s. The extra half-inch of width accommodates larger Brembo brakes — four-piston calipers up front biting down on rotors that have grown by 0.95 inches in diameter and thickness to 12.8 by 1.18, and two-pot calipers pinching 12.4-by-0.79-inch rotors, up from 11.4 by 0.71, out back. These are the same brake dimensions as you'll find on the car Subaru still considers the flagbearer of its enthusiast lineup, the rally-ready WRX STI. Performance Pack BRZs are suspended by Sachs ZF dampers and incur a weight penalty of just 20 pounds over the Limited.

The Series.Yellow seen here takes all the goodies of the Performance Package and adds exclusive yellow paint that Subaru is quick to point out is entirely different from the yellow that appeared on the 2015 Scion FR-S Release Series 1.0. We'll concede that it's less boy-racer, but only slightly. Other visual cues include black versions of the Performance Pack alloys, all-black side mirror housings, and smoked badging. 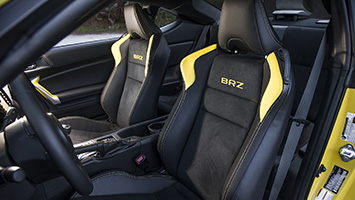 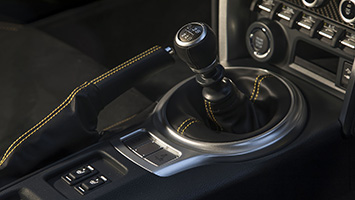 The interior is a cacophony of banana, with xanthic stitching and embroidery on the following surfaces: seats, doors, dash, steering wheel, knee pads, shifter boot, and floor mats. It's all a bit Pep Boys circa 2001, but if you must have one of these canaries — limited to just 500 for the US — it's only a $35 premium above the Performance Package-equipped Limited.

Circuito Guadix is a tight, technical course made up of slow- to medium-speed turns, often in quick succession. Very much unlike Fuji Speedway, the turns are packed closely and fold into what would be an infield, using every available patch of real estate. The track's designer, Clive Greenhalgh, told us that the remote facility has served as a testbed for several auto manufacturers as well as the training ground for many a professional driver, and that if you can master its corners, you can master any circuit.

We didn't quite master it, only having time for a few laps in either direction, but the BRZ PP was superbly suited to the dense course. Turning in a good lap time required line discipline, laser focus on braking points, and good heel-toe technique. Gaudix doesn't have a long enough straight where a higher-horse car can use sheer power to make up for mistakes made in the corners, giving the BRZ the ability to methodically reel in and dispose of far "faster" cars. The way a proper tool enhances your craftsmanship, the BRZ makes you a better driver. 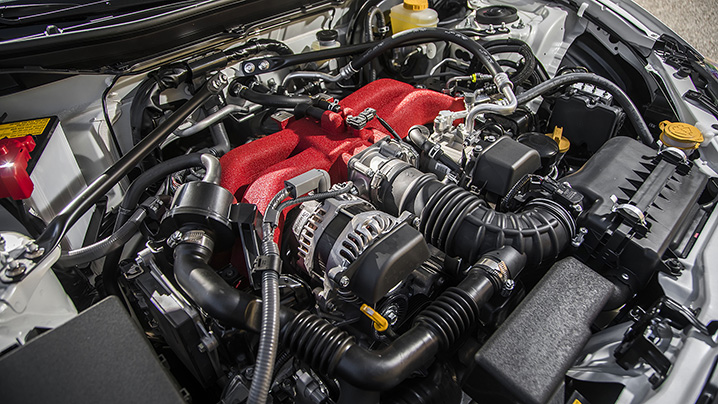 All 2017 BRZs have a lap timer that's activated by a button on the steering wheel, along with other new spoke-mounted controls for the stereo, Bluetooth, and voice-command activation. We attempted to use the timer, but either our thumbs were too fat or the "reset" button sat too close to the "new lap" button (or maybe both) and we ended up with a grid of zeroes when it came time to review. Like learning the course, we could have used more practice with the system's operation.

On the track, the brakes are the Performance Package's biggest advantage over standard-issue BRZs. Despite a constant flogging by a succession of motoring journalists, the Brembos never exhibited any fade. Pedal feel remained firm, consistent, and linear through the last lap of the day and the drive home too. With such a light car — even with the PP, the BRZ weighs just 2,784 pounds — the brakes can pretty much always save your skin before you run out of tarmac, unless you're acting like a complete idiot.

Even when we overcooked a turn, the electronic nannies gave plenty of leeway before kicking in the ABS or stability control. That's because engineers dialed the VSC way back for all 2017 BRZs, both in the amount of sliding it'll permit and the intrusiveness of its intervention. We approve. 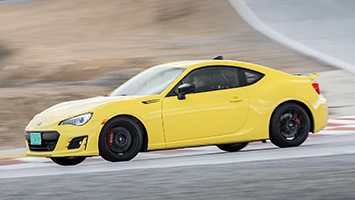 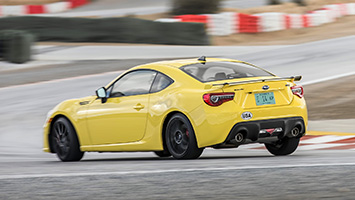 The suspension, about 10 percent softer in the rear, isn't as drift-happy as on pre-2017 models. You can still easily boogie the rear end with a clutch kick in a hairpin, but on wide sweepers you can bury the accelerator and the tail simply hunkers down for more despite its eco-minded Michelin Primacy tires.

As much fun as the BRZ was on the track, where it really came alive was on the drive back to Granada. The scenic route took us over two-lane back roads so remote there was horse poop on them.

These were the mountain roads that the BRZ was made for. The foothills of the Sierra Nevadas provide an endless procession of switchbacks, elevation changes, and views each more breathtaking than the last, and the BRZ glided over them all like Fred Astaire on roller skates.

Its six-speed manual is smooth and precise as ever and never leaves you hunting for a gear, while the quick throttle response encourages rev matching. The seats strike the perfect balance, keeping torsos centered during aggressive track maneuvers while not being so overly bolstered to make the car hard to get in and out of. Best of all, the steering and braking are progressive and predictable, leaving plenty of buffer around the many blind curves and steep drop-offs we encountered and inspiring enough confidence for us to have some fun in a remote area of a foreign country with no cellphone service. 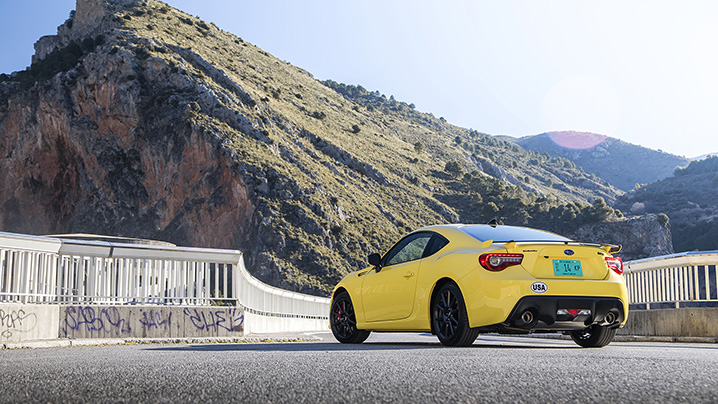 Spain is an old country and it doesn't let you forget it. Many of its streets are impossibly narrow, and more than once alleys we thought were pedestrian pathways were actually meant for cars, most of which are the size of a Yaris. Also, they're swarming with suicidal scooter pilots.

After having the chance to experience it away from a track and in a version of the real world, we came to truly appreciate the Subaru's visibility, something the company claims is a tradition passed down from the plane canopies from parent company Fuji Heavy Industry's aircraft roots. Engineers even fashioned a new spoiler out of aluminum so it could be made thinner than a typical composite wing.

We know that for the price of a Performance Package BRZ you can get a V6 Camaro or Genesis Coupe. However, you can't help but feel those are compromises. You know you're using a drill bit one size too big, or fiddling unnecessarily with a one-size-fits-all chassis. That's the beauty of the BRZ – if your job is slicing through a tight track crammed with turns or charging up a mountainside on a ribbon of asphalt, there is no more precise instrument than the BRZ.