Surprise, there are few differences between the US and global cars. The BMW 4 Series and M4 coupe, convertible, and Gran Coupe get a major refresh for 2018, but you'd be forgiven for not noticing on first glance. Despite a comprehensive overhaul, this is still the same basic car that debuted in America in 2013. We saw the refreshed global 4 Series last week, but BMW released the details on the US version today.

The 4 Series received an engine overhaul and a pair of new names, 430i and 440i, sometime last year. This new refresh, with its updated design and retuned suspension, now compliments the underhood overhaul. BMW said part of the refresh's goal was to more clearly separate and show off the differences between the 3 and 4 Series cars. Inside, the infotainment system gets a mild overhaul with a new arrangement for the display. The system offers more driver customization and better integration with the BMW connected app.

Updates for 2018 include new LED lighting front and rear. The headlights are an updated take on BMW's now iconic halo ring lighting. These lights are fitted into new front and rear fascias that are more of an evolution than a full rework. There are new paint colors and new wheel designs available, including an optional wheel that's exclusive to the M4 Competition Package.

The 4 Series was intended to be a sharper and sportier alternative to the standard 3 Series. In that vein, many of the 2018 updates take place underneath. The suspension and steering have been revised, with BMW promising a sharper and slightly stiffer setup. Of course, this new suspension means the updated car should be even more capable than the outgoing model.

The 430i and 440i xDrive go on sale in March, with updated pricing coming closer to launch. 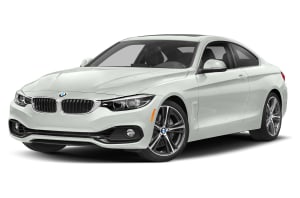