DOHC V8 coming to 2018 Chevy Corvette according to GM Document

Michael Austin
Update: GM has removed the listing on its service website.

Well it looks like the rumors are real. The Chevrolet Corvette will drop pushrods and adopt dual overhead cams in 2018, at least in one application. According to a document on the GM service website, an engine with the code designation LT5 and a 6.2-liter displacement is among the General Motors list of 2018 powerplants, and the application corresponds to the Corvette.

The LT5 name is no coincidence. It's the same as the last DOHC Corvette engine, a Lotus-designed, Mercury Marine-built V8 found in the 1990 to 1995 ZR-1. Our highlights of the GM pdf, seen below, show that the new LT5 is all aluminum and does not seem to have any form of forced induction. As The Drive points out ( via Reddit), that suggests the engine is unlikely to go in the rumored upcoming ZR1. The logic being that the ZR1 is supposed to out-power the Z06 (as it did in its previous iteration) and it's difficult to top LT4's 650 horsepower in a 6.2-liter engine without turbo- or super-charging. 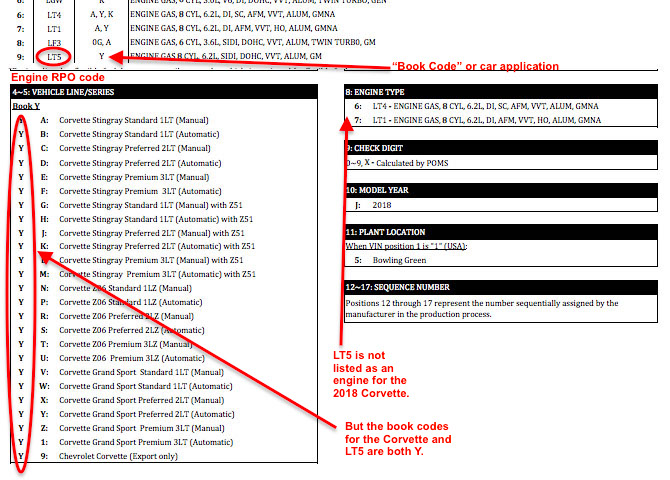 Which inevitably leads to the mythical mid-engine Corvette. The specific advantages overhead cams have over pushrods work naturally with the idea of a Ferrari- or Ford GT-fighting supercar with the engine behind the seats. DOHC engines can hit high revs more easily, and can adopt independent valve timing (and even lift) for the intake and exhaust valves. That suggests a screaming, high-rpm engine in place of the classic low end torque characteristics of the traditional Chevy small block. DOHC engines are typically larger and heavier than pushrods, though, so everything comes with a price.

We did not reach out to General Motors for comment because, come on, they're not going to talk about this. They never do.