Hitting both ends of the performance/efficiency spectrum.

Jeremy Korzeniewski
BMW is expanding its 5 Series range in the United States by adding new models at both ends of the performance/efficiency spectrum. We'd love to tell you that one of them is the new M5, but it's not. At least not yet. Fortunately, the M550i xDrive sounds like the next best thing.

Powered by a TwinPower Turbo 4.4-liter V8 engine with 456 horsepower at 5,500 rpm and peak torque of 480 pound-feet starting at just 1,800 rpm, BMW says the M550i xDrive is the quickest 5 Series ever made. Indeed, the model's 0-60 time of "under four seconds" means it's quicker than the previous-generation M5. All that power is sent to all four wheels through an eight-speed automatic transmission. A rear-biased torque distribution ought to make the M550i pretty fun to drive, too. It sits 10 millimeters lower than other 5 Series models, and the various electronic suspension settings are tuned by the experts at BMW's M division.


If overt power isn't your thing, the BMW 530e iPerformance may be more your speed. It's a plug-in hybrid powered by an electric motor with 95 hp and 184 lb-ft, paired up with a 2.0-liter turbocharged four-cylinder with 180 hp and 215 lb-ft. Combined, the vehicle's 248 ponies and 310 lb-ft are enough to push this 5 Series to 60 in 6.1 seconds. The liquid-cooled, 9.2 kWh, lithium ion battery pack is positioned so that it doesn't take up any trunk space. xDrive all-wheel-drive is optional.

Both of these new 5 Series models will go on sale in the spring of 2017. Pricing and efficiency figures have yet to be announced. 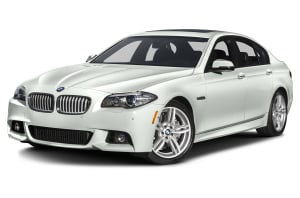