David Gluckman
The current Audi A6 is getting old. This generation was first sold as a 2012, got a mild facelift for 2016, and is likely to be replaced for 2018 or 2019. So 2017 may be its last year, but it's still my favorite mid-size Germano luxury thing. I just had to be reminded of its existence.

BMW and Mercedes-Benz have been making big noises in this segment recently, with a new 5 Series on the way and the recently launched E-Class, and that apparently distracted me enough from the A6. There's also the fact the Audi is starting to look a bit anonymous on the road. It's still handsome, sure, but it doesn't stand out like the related A7. The 2016 refresh did just enough to keep it looking contemporary, though, and for 2017 all A6s come standard with the S Line appearance package. That helps.

What struck me about the A6 was that it doesn't feel dated inside. Everything is laid out nicely, it's just comfortable, and you can see out of it. The one I drove had the beautiful layered walnut trim – it looks like pin-striped wood. (And no, it wasn't painted this bright blue, although you can get that on a special-order car if you pay $3,900 for Exclusive paint.) There are no huge screens inside, and the A6 won't get Audi's Virtual Cockpit until the next generation, but I didn't miss any of that. All of the excitement of Virtual Cockpit's beautiful reconfigurable screens, and I had forgotten that the display between the gauges it replaces had a perfectly pleasant Google Maps view already. It's the same basic functionality as Virtual Cockpit here, you just can't press a button to minimize the real-life gauges. And I'm fine having actual gauges. 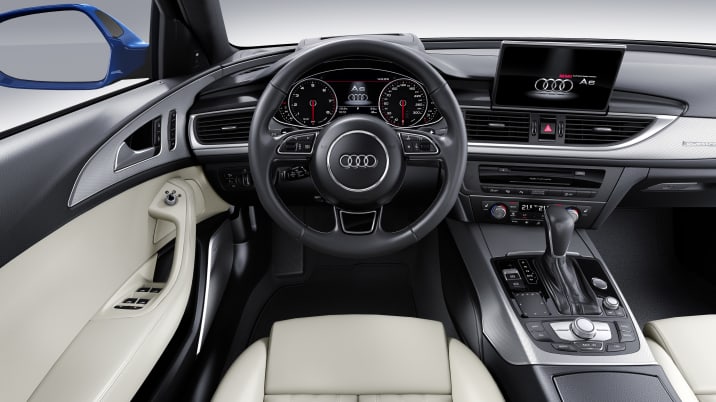 I was somewhat surprised, however, to see Apple CarPlay pop up when I plugged in my phone. (It's included for 2017 as part of the Audi smartphone interface, which comes with the Premium Plus trim and above.) Using CarPlay is a bit weird without a touchscreen, just like it is on other Audis and Mercedes products, but the nice thing about CarPlay is that you really don't need to interact with it much, since there isn't much to interact with. Oddly, the touchpad on the center console doesn't work to navigate from CarPlay tile to tile. I got over that pretty quickly and just turned the dial when necessary.

There's also a feeling that nothing's missing when you drive it, that Audi couldn't really add much to improve the experience. The car is incredibly smooth and comfortable going down the road. This particular A6 had the base 252-horsepower 2.0-liter and optional all-wheel drive, which comes with a ZF eight-speed auto. And guess what? It's perfectly fine. Better than fine, actually, because this four-cylinder is refined and the transmission makes up for any lack of power you might otherwise perceive. There's nothing particularly complicated about any of it, and I liked that. I generally geek out about new tech. Am I becoming a Luddite?

The 2017 A6 was surprising for how little the good stuff has changed and how well it has kept up with the times, even though it's about to be replaced by a new version. Audi usually takes a year or so to bring a new product to the US after it's been launched in Europe, and in this case I won't really mind the wait.